Drinking made me feel like everything was possible. Until I started thinking nothing was 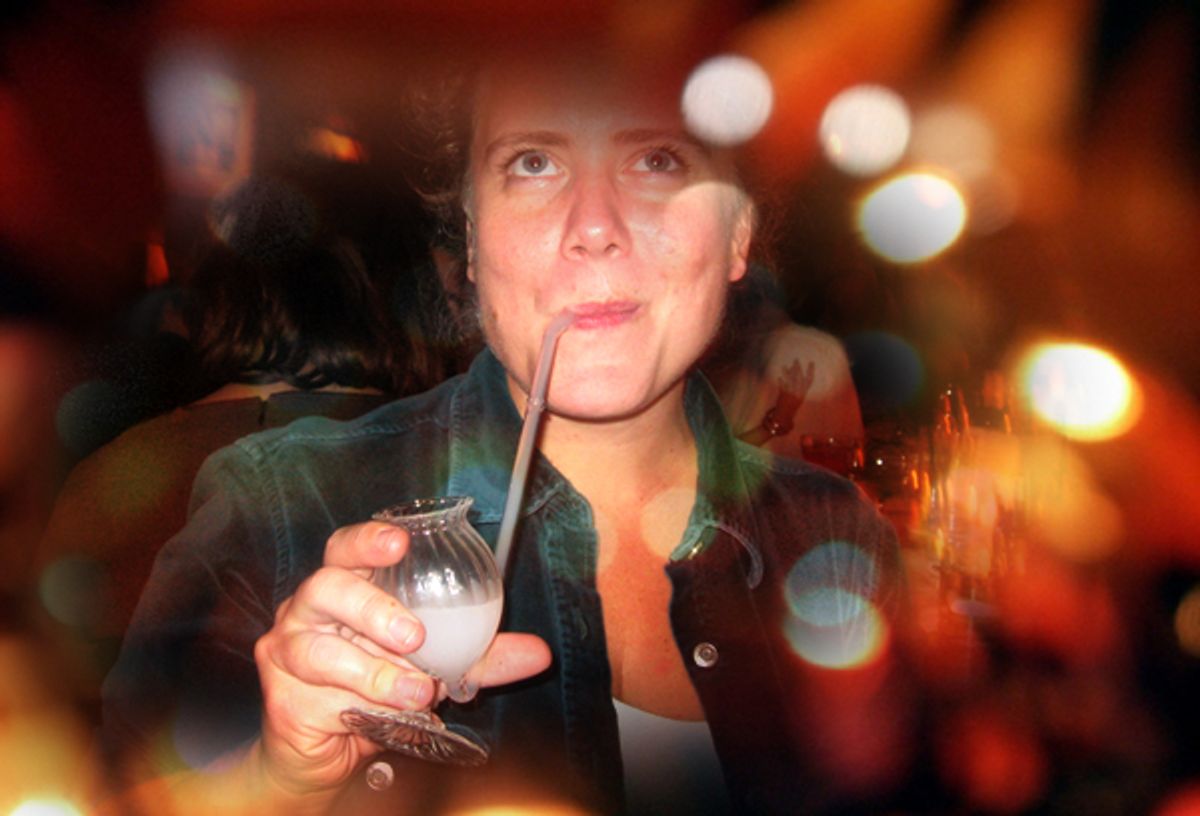 The author at a bar in New York City.
--

The morning after my first office holiday party, I woke up in a dog bed in someone else's house. This was surprising to everyone involved, but perhaps most poignantly, the dog. The night prior had been an elegant shindig at an Austin bar, where I'd managed to knock back two bottles of wine, suck down a pack of smokes and eat absolutely nothing. I remember having a blast that night, I remember being on fire … and then, I remember nothing. This happened sometimes. A blackout like one of those cartoon anvils that descend from the sky with a whistle and konk you over the head. One moment you're laughing with friends. Another moment: Ker-PLONK. I woke up that morning when the Labrador's cold, wet snout nudged into my face. Lady, can you make some room?

I've always liked booze, even when I was too young to know I wasn't allowed to like it. At 8 and 9, I used to steal sips from the half-empty cans of Pearl Light left by my mom and dad in the refrigerator, a good girl's bad little secret. I'd spin around the living room and stumble into walls, giggling. (This story is inconceivable to me now. Not that I drank at such a young age, but that my parents didn't finish their beers in one sitting. Who are you people?) In high school, I knocked back Budweiser while the sweet sugar plums on the dance team and the cheerleading squad sipped their dainty wine coolers and passed out on the couch. College was a five-year jag of bargain wine and bourbon. I was good at drinking, which was a relief because I also quite liked it. Being drunk solved one of the key problems of my existence -- namely, that I was me.

An over-thinker by nature, I am anxious and prone to settling on a comfy couch and pondering how on earth I could ever leave it. And sometimes I think I never would have, if I hadn't loved drinking so much. Booze turned every maybe into an unequivocal yes. I say yes to that party, and I say yes to dancing on the table, and I say yes to smoking till dawn and spilling all our secrets, and I say yes to having sex with that gentleman in the corner, and I say yes to that hot dog wrapped in bacon and dipped in chili cheese. There was a swing-for-the-fences quality to my drinking that surprised even me. My college friend tells a story about the time I walked out of my third-floor apartment at 1 a.m., droopy eyed and dangling a cigarette out of my mouth, fell down a flight of concrete stairs, then picked the cigarette off the ground, and kept smoking.

You could say I was a party girl, although that sounds like a hot chick in a crop top grinding on the dance floor and taking shots of Jager. I was more of an old-fashioned lush, who believed in the healing power of draft beer and vodka. Half Irish, and half Finnish, I was practically bred to hold my liquor. There was nothing moderate about the way I drank. I drank fast, and I drank with vigor. I never went in much for moderation anyway. Not in love, not in work, and not in premium import lager. I wanted to be All In.

And so, there were mornings when I woke up in a dog bed, and it felt like someone had taken a mellon baller to my frontal lobe. God, what a disaster. What an insult to basic common sense, not to know where you were or how you got there, a big blank spot where three hours should have been. "God's little way of telling me I don't need to know," I sometimes joked about those blackouts. But it was creepy, like a "Twilight Zone" episode: Your mouth and your body move, but your brain has gone missing.

"Do you think you got roofied?" a friend asked me later.

Eventually I discovered what happened that night: I had been so bombed at the office party I couldn't remember where I lived, which is very classy. And so an exceedingly nice coworker dropped me off at the home of another exceedingly nice coworker. (If you are going to be a lush, exceedingly nice friends are pretty much a requirement.) And in the middle of the night I got confused and toddled out into the living room and snuggled up in the dog bed. Sorry pup: You snooze, you lose.

When I woke up, I was foggy. Then mortified. "Please don't tell anybody at work about this," I asked as my colleague drove me to my car that morning. And because he is an exceedingly nice guy, he did not. But he didn't have to. Because I did.

I turned the whole episode into shtick. We laughed about it at a staff meeting. My boss demanded details: Was I sprawled or in the fetus position, did the dog whine or bark? He wanted to picture my humiliation as accurately as possible. (This was a newspaper, after all.) Comedy is tragedy plus time; apparently "time" for me is about 45 minutes and a breakfast taco.

I quit drinking for a year after that. Life straightened out, but normality felt quiet and bloodless, and I longed to be the girl sinking into the corner booth till the lights flickered on. Quitting something you love -- be it a doomed relationship, or vodka martinis -- rarely happens in one moment. It is an accumulation of failed attempts, coming back on your knees only to break all the dishes in the cabinet the next day. So eventually, I was roaring back to life with a beer sloshing in my hand. I promised myself I'd be more careful this time, more in control. Screw that: I was All In.

Maybe it was a coincidence, maybe it was a sign of the indulgence of the early 21st century, but both "Bridget Jones' Diary" and that fizzy HBO show with the four fancy ladies became popular right around that time. But it created something of a golden age for brassy sots like me. Suddenly it seemed that the most thrilling part of being a woman -- and a writer, and a charming, self-deprecating heroine -- was getting sauced to the gills, and chain-smoking, and avoiding the gym at all costs, and acting like a slut, all of which I was already doing, ta-daaah. People seemed not only to accept my drinking but also to expect it, as though I were a little wind-up doll of boozy misadventure. I kept drinking through two geographic moves and several promotions and at least two very important relationships. There were years when my drinking was fine. And then, the cartoon anvil would descend: ker-PLONK.

What's funny and kind of sweet to me now is how faithful I stayed to drinking, how I never strayed from that one escape. Friends around me got baked, and dabbled in cocaine, and rubbed each others' scalps rolling on E, but I was like the girl who fell in love with her childhood sweetheart: This one's good, this one's all I need.

Six months ago, I woke up from a lovely wedding reception and couldn't remember how I'd gotten home. It wasn't particularly dramatic. Nothing was amiss in the apartment; my head wasn't aflame. Mostly what I felt was a blueness, and I remember thinking -- above all other things -- that the answer to any question I could think of was no: I would never change, I would never quit drinking, I would wake up in dog beds every Sunday morning for the rest of my life, and I would be the sweet, heartbroken little lush someone had to carry out of the bar. What a failure of creativity, what a narrow little pinhole I was staring through: I was 36 years old, and I thought that was just … it.

I decided to quit drinking for one day. And then I tried a month. And then six. Honestly, it's kind of how I drank too, when I was trying to cut down: Well, I'll just have one beer. OK, I'll have four. Wait, four makes me think six would be really good. I have no idea if I've quit drinking forever. Who knows if they've stopped doing anything forever? I don't even know if I want HBO next year. But that unpredictability is kind of the point right now, that there is the possibility of another story that's different from the one that came before. I'm totally confused about how to date without drinking, how to dance on a table without drinking, how to say yes without drinking. Which is thrilling when you let it be, a question mark that stretches into the horizon, instead of hanging grimly over the night that passed.