The past year was one replete with Boehner-style bawling 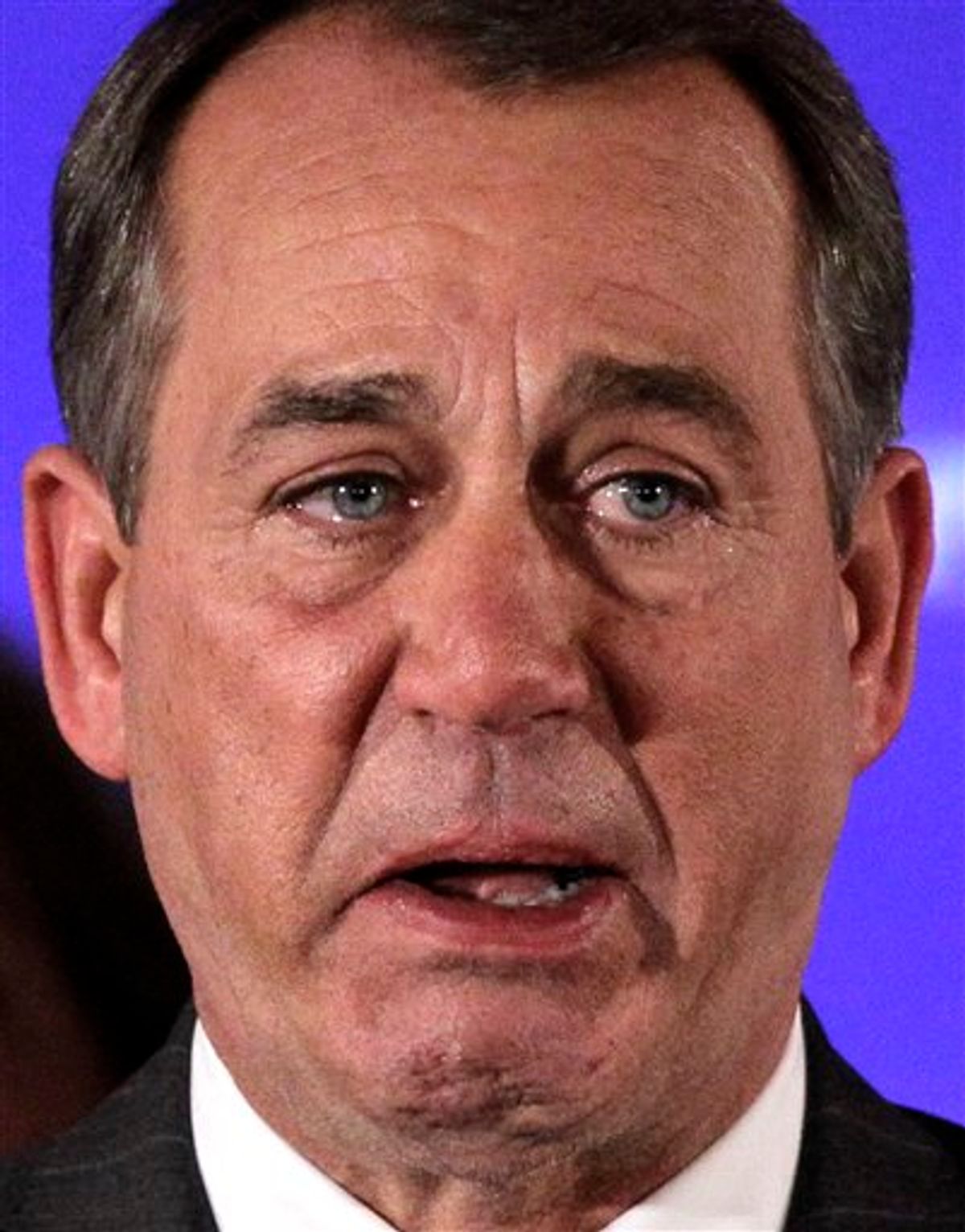 When pro football player Cedric Benson led his Cincinnati Bengals to a long-awaited victory that ended a 10-game losing streak, his eyes grew wet and a tear ran down his cheek as he stood before his locker afterward.

The running back said he felt wonderful, tremendous, joyful. So why the public cry? Relief, strong emotions after a lot of tough times for him and the team, and ... well, why not?

After all, Rep. John Boehner, who lives just north of Cincinnati, wept on national TV the night Republican election victories assured he will be the nation's next speaker of the House. And from the neighboring state to the south, Sen. Mitch McConnell, R-Ky., choked up as he bid farewell this month to a retiring colleague.

Just a few examples of well-known males turning on the waterworks in a Year of the Tear, four decades after Marvin Gaye sang that "I know a man ain't supposed to cry" and a Democratic presidential contender's campaign foundered under the weight of reports he teared up.

Maine Sen. Edmund Muskie had plans that morning in 1972 to call out the publisher of the Manchester (N.H.) Union Leader over criticism of his wife. But reports that he had tears in his eyes -- which Muskie went to his grave insisting were melted snowflakes -- raised questions about whether he could handle crises or stare down the Russians.

"Back in the early '70s, it was male machoism -- men were not supposed to publicly display emotions; it was viewed as a sign of weakness," said Severin Beliveau, an Augusta, Maine, attorney who was a Muskie campaign adviser.

But stoicism gave way over the years to sensitivity as a desirable male trait, and by 2010, there were few fears for tears left among well-known American men.

"With the passage of time, we've seen that demonstrations of emotions can be viewed as a quality to have as an asset," said Beliveau. "People see a more human side of the male."

Actor David Arquette told Howard Stern on the radio in October he had cried in the aftermath of having sex with another woman after his split with Courteney Cox. He lamented the loss of intimacy with the "Cougar Town" star; he didn't comment on his new partner's post-coital emotional state.

A country song title says "Cowboys Don't Cry," but it's not among Brad Paisley's many hits. He lowered his cowboy hat-wearing head as he choked up, recalling his grandfather's advice to learn the guitar, after receiving the Country Music Association's Entertainer of the Year award.

"There's no crying in baseball!" Sorry, gruff, old-school manager played by Tom Hanks in "A League of Their Own," but today there is, and by some of the game's best players.

Most Valuable Player Josh Hamilton said he was fighting tears as his Texas Rangers neared the American League championship while he thought about his long struggle to come back successfully from cocaine abuse.

On the National League side, Cincinnati's Joey Votto acknowledged that he cried after receiving word he had won the MVP award, a year after depression over his father's death temporarily sidelined him.

Even Rahm Emanuel, whose take-no-prisoners political style earned the nickname "Rahmbo," teared up on the day he announced his resignation as President Barack Obama's White House chief of staff.

Conservative commentator Glenn Beck has cried publicly about many things, from past personal struggles to "caring an awful lot about my country," but he was particularly dramatic in July while disclosing an eye disease he said threatens his sight. He told a tour audience first, then showed a replay on his Fox News show for those who missed it the first time.

But it's Boehner who cried in public so often he's already been dubbed "Weeper of the House."

On election morning Nov. 2, a reporter shouted a question to Boehner outside his West Chester polling station about how his late parents would feel seeing their son's success: "Aw, now you're just trying to make me cry," Boehner replied with a smile.

Turns out it wasn't hard to do.

That night, Boehner choked up as he recounted his bootstraps climb from blue-collar family of 12 children, working his way through college. Then came this month's broadcast of a "60 Minutes" interview in which he broke down repeatedly -- over his humble rise, about his concerns for children's chances at the American dream, when his wife praised him. That led to some ridicule by detractors, some questioning his sincerity or emotional stability.

Asked for response, Boehner's office referred to his explanation to the CBS interviewer Lesley Stahl: "What you see is what you get. I know who I am. I'm comfortable in my own skin. And everybody who knows me knows that I get emotional about certain things."

Colleagues and other people who've known Boehner for years agree that he's long worn his emotions on his natty sleeve.

"It's not anything new with Speaker-elect Boehner," said Gene Beaupre, Xavier University political scientist. "I've seen him, years ago, in front of several hundred people at a conference get pretty emotional, talking about his own life and the chances he got."

Beaupre thinks that people accept such displays as long as they seem genuine, and can even admire politicians who have deep feelings and aren't afraid to express them. And, the more males who cry in public, the more who are likely to follow.

"I do think when you see people in power showing their emotions the way these gentlemen have, I think it makes it easier for others to do the same," Beaupre said.

Among those not crying in public? Boehner's predecessor, Democratic speaker Nancy Pelosi, and other prominent women, some of whom wondered aloud about whether women would still be accused today of being too emotional and soft. Former Republican vice presidential candidate Sarah Palin recently took a break from shooting caribou, climbing mountains, and camping out in the Alaskan wilderness to ponder that point.

"I don't know if a woman would be given a pass necessarily," the former governor told ABC News, while saying she respects Boehner for showing his feelings about things that are important to him.

"But that's one of those things where a double standard certainly is applied," she added. "I'm sure if I got up there and did a speech and I started breaking down and cried about how important it is to me that our children and our grandchildren are provided great opportunities, I'm sure that I would be knocked a little bit for that."

Editor's Note: Sewell, Cincinnati correspondent for the AP, can't make it through the end of "Field of Dreams."