While the death count rises, military rushes to restock Rockhampton before it's cut off by the rising waters 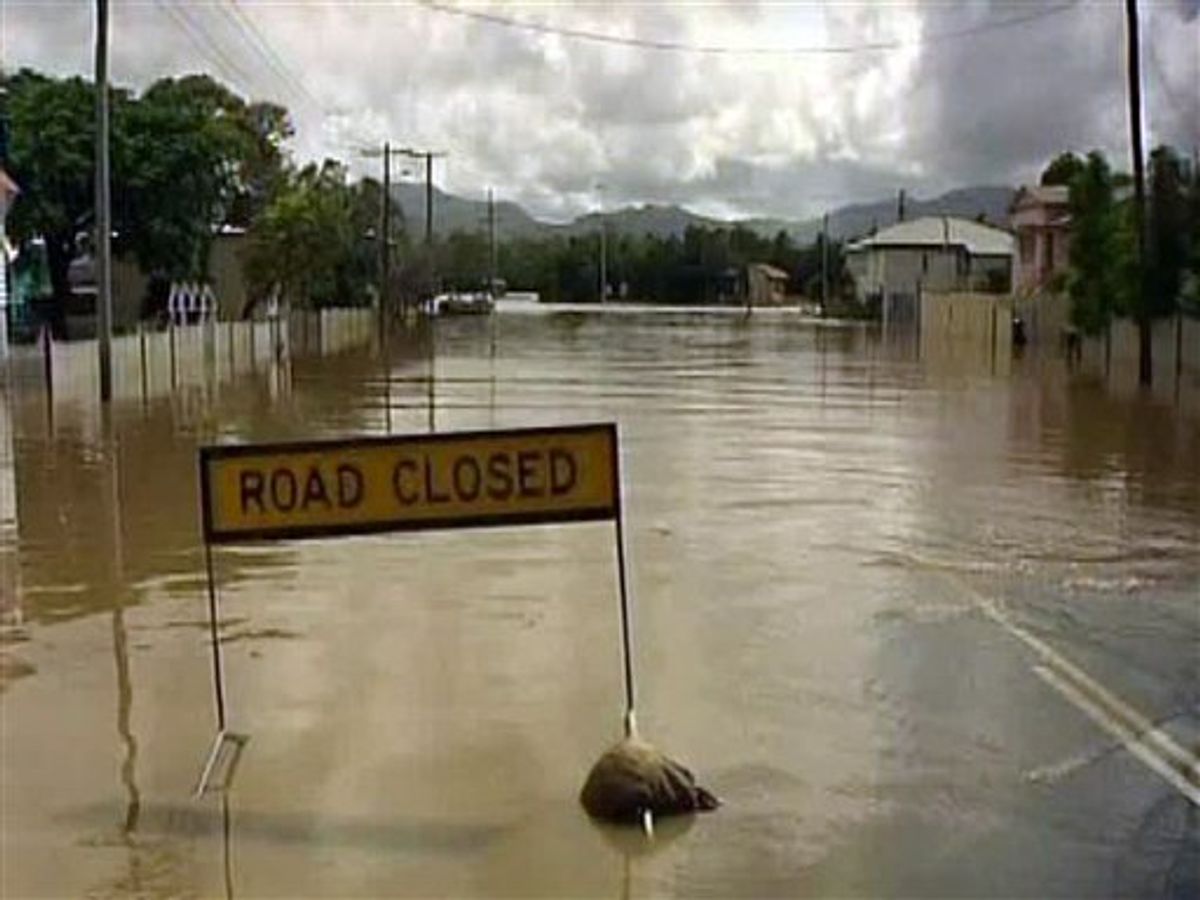 This image made from AuBC video via Associated Press Television News shows a flooded street in Rockhampton, Australia, Sunday, Jan. 2, 2011. Days of pounding rain last week left much of northeastern Australia swamped by a sea of muddy water, with flooding affecting about 200,000 people in an area larger than France and Germany combined. (AP Photo/AuBC via Associated Press Television News) AUSTRALIA OUT, TV OUT (AP)
--

Military flights rushed Monday to restock an Australian city before it was cut off by floodwaters that have turned a huge swath of the Outback into a lake, while police confirmed two more deaths in the crisis.

Drenching rain that started before Christmas has flooded an area the size of France and Germany combined in northeastern Queensland state. Rivers are overflowing and at least 22 towns and cities in the farming region are inundated.

In the coastal city of Rockhampton, waters from the still-swelling Fitzroy River closed the airport and cut the main highway to the state capital of Brisbane. Scores of families abandoned their homes for relief centers on high ground.

Residents emptied supermarket shelves of food and bottled water in recent days as they stocked up to reduce the need to get around in waist-deep waters.

Acting Defense Minister Warren Snowdon said a C-130 military cargo plane would fly to a town north of Rockhampton on Monday carrying food, medical supplies and other items that would then be trucked to the stricken city.

Authorities have warned the Fitzroy will continue rising until late Tuesday or early Wednesday local time.

Mayor Brad Carter has said about 40 percent of the city could be affected by the surging waters, and residents could be forced to wait at least two weeks before returning home.

State authorities say about 200,000 people have been affected by the floods, Australia's worst in a decade, and Prime Minister Julia Gillard on Monday extended emergency relief to those affected, including low-interest loans to farmers to begin cleaning up and get their businesses running again.

"This is a major natural disaster, and recovery will take a significant amount of time," Gillard said. The damage could ultimately amount to hundreds of millions of dollars, she told reporters.

Three people have died in the flooding since Saturday, though police in Queensland state say seven other people have drowned separately involving swollen rivers and water accidents since tropical deluges began in late November.

Chief Superintendent Alistair Dawson said the latest victim was a man who drowned Monday when the car he was traveling in was washed off a flooded causeway in the town of Aramac, in central Queensland.

Earlier Monday, police said they had recovered the body of a man who was last seen Saturday when his small boat was swamped by raging waters in a different part of the state.

The rains that started the flooding have eased, and water levels have been dropping in some towns. But officials said about 1,000 people were living in evacuation centers across Queensland, and it may be a month before the floodwaters dry up completely.