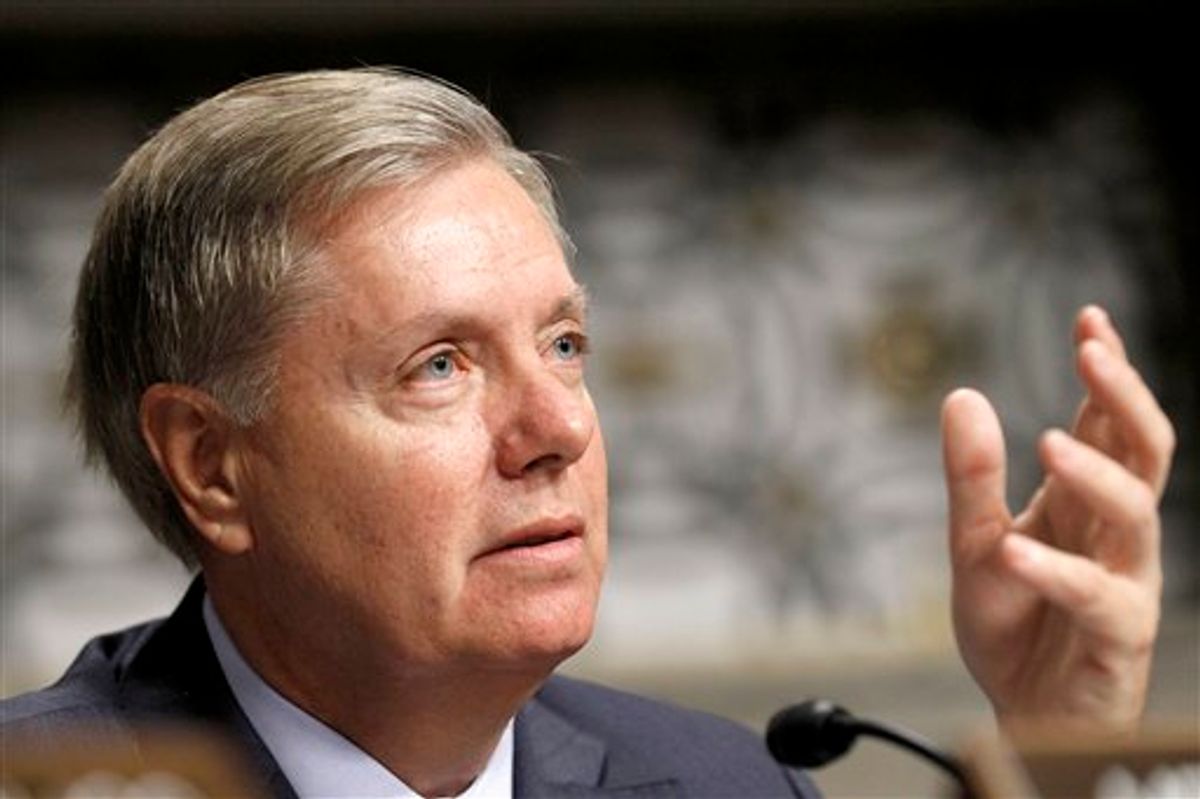 Just in time for the new deficit-conscious Republican Congress, Sen. Lindsey Graham is calling for the American military to be in Afghanistan permanently.

His call for permanent U.S. bases in Afghanistan is not particularly novel -- his close Senate buddy John McCain has been saying the same thing since at least 2005. But Graham's formulation, that an American military presence is something to be "earned" by a foreign population, is a striking reflection of his neo-imperialist worldview. As he said on Meet the Press Sunday:

Graham: I want an enduring relationship with Afghanistan past 2014 , politically, economically, and militarily, so that country never goes back into the hands of the Taliban or al-Qaeda . The two words that will be talked about in 2011 with Afghanistan are "corruption" and " Pakistan ." I am hopeful the Pakistani army will be more bold in attacking safe havens across the border that lie in Pakistan . I hope the Karzai government will better address corruption. I hope we can find an enduring relationship with Afghanistan that will make sure that country never goes back in the hands of terrorists. And the idea of putting permanent military bases on the table in 2011 , I think would secure our national interest and tell the bad guys and the good guys we're not leaving, we're staying, in a responsible way if the Afghan people want us to stay.

David Gregory: But that's important. You believe a permanent U.S. military presence in Afghanistan is required in order to head off a potential failed state in the future?

Graham:  I think it would be enormously beneficial to the region , as well as Afghanistan. We've had air bases all over the world . A couple of air bases in Afghanistan would allow the Afghan security forces an edge against the Taliban in perpetuity. It would be a signal to Pakistan that the Taliban are never going to come back in Afghanistan. They could change their behavior. It would be a signal to the whole region that Afghanistan is going to be a new and different place. And if the Afghan people want this relationship, they're going to have to earn it. But I hope they will seek a relationship with the United States of where we can have an enduring relationship, economic and militarily and politically. And a couple of air bases in Afghanistan will give us an edge militarily, give the Afghan security forces an edge militarily, to ensure that country never goes back into the hands of the Taliban , which would be a stabilizing event throughout the whole region. That has to be earned by the Afghan people, and it has to be requested by them.

So, as Graham suggests, a push for permanent Afghan bases is something to look for from the new Congress this year. This is not actually so far off from the Obama administration's position, which currently provides for an indefinite, rather than specifically permanent, military presence in Afghanistan.

Here's the video of Graham on Sunday: