Republicans look to use House advantage towards investigating Democrats, preparing for 2012 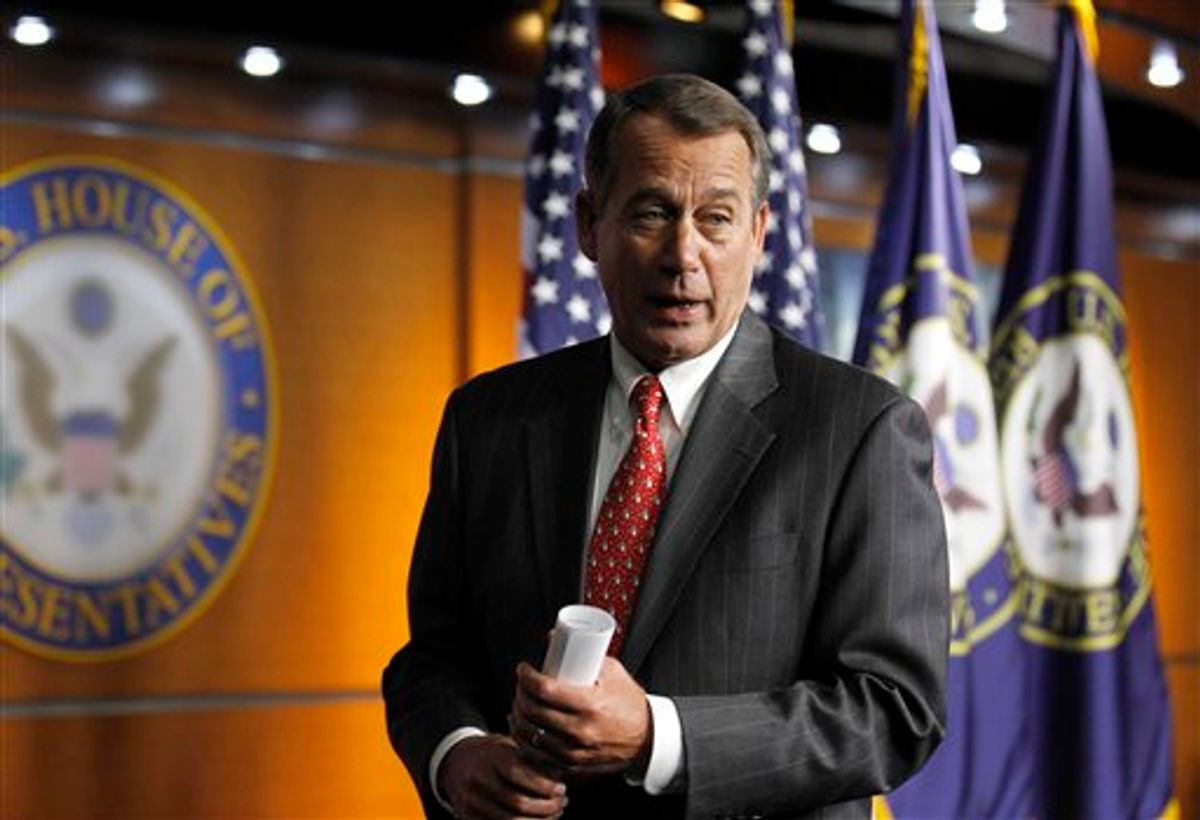 FILE - In this Dec. 17, 2010, file photo House Speaker-designate John Boehner, R-Ohio, talks with media on Capitol Hill in Washington. Two early showdowns on spending and debt will signal whether the 112th Congress can find common ground despite its partisan divisions, or whether it's destined for gridlock and brinkmanship that could threaten the nation's economic health. (AP Photo/Alex Brandon, File) (AP)
--

Even if the next two years end in congressional gridlock, Republicans hope to build a record that demonstrates to voters in 2012 that they can get it right.

The GOP is promising to use the new Congress that convenes Wednesday to cut spending, roll back President Barack Obama's health care overhaul and prevent unelected bureaucrats from expanding the government's role in society through regulations that tell people what they must or can't do.

Passing their top priorities may be easier in the House, where Republicans hold a 241-194 majority. It will be harder in the Senate where Democrats still hold an edge, though smaller than the one Obama had during his first two years in the White House. But if the GOP agenda fails to change the lives of Americans, it could still prove to have a greater impact on next year's elections.

House Republicans also pledge to hold tough investigations and hearings on the president's programs and policies, ending the free pass that Democratic committee chairmen gave the Obama administration the past two years.

Republicans insist they'll bring key administration officials before congressional microphones and that the public can watch the webcasts. The friendly tone of inquiry from Democratic chairmen will be replaced by Republicans demanding answers to these questions: What's the purpose of this program? Is this the best use of the taxpayers' money?

The chief Republican investigator, Rep. Darrell Issa of California, is raring to get started, and he's not alone. Issa, the incoming chairman of the House Oversight and Government Reform Committee, has been especially critical of what he calls waste in Obama's economic stimulus spending.

"The sooner the administration figures out that the enemy is the bureaucracy and the wasteful spending, not the other party, the better off we'll be," he told "Fox News Sunday."

Rep. Harold Rogers of Kentucky, incoming leader of the House Appropriations Committee, says he wants top officials from all major government agencies to appear and justify their spending.

The next chairman of the House Energy and Commerce Committee, Republican Fred Upton of Michigan, says he'll work to stop over-zealous government regulators. A big target for him is the Environmental Protection Agency, which is writing rules to limit greenhouse gases blamed for global warming after Obama's effort to get Congress to do it stalled in the Senate last year.

Upton, like Issa, will have a large investigative staff.

"Republicans need to make sure they bring forward solutions, even though it may be difficult to get them accomplished," Rep.-elect Kristi Noem, R-S.D., said in an interview. She said the lesson from the November election is, "The American people will replace people if they're no longer in touch or listening."

Noem benefited from that view, defeating Democratic Rep. Stephanie Herseth Sandlin. Noem has risen to the forefront of the freshman class; she was chosen to serve in the GOP leadership.

In the Senate, there's a chance the Democrats will replace Republicans as the party of "no," assuming the House GOP passes much of its agenda. Democrats will control the Senate 51-47 with two independents, and only need 41 votes to block initiatives that arrive from the House.

Among the reasons that the Republican agenda will likely have a bigger impact on the next election than on the day-to-day lives of most Americans are:

--Much of the government spending has been politically untouchable. About 60 percent goes for entitlement programs, including Medicare, Medicaid and Social Security. The nation also is paying for wars in Iraq and Afghanistan and major reconstruction projects in those countries. Both parties have considered it politically foolish to mess with Medicare and Social Security. Also, Republicans don't have a clean record as budget cutters.

"Spending restraint on the Republican side is a theory yet to be proven," said Robert Bixby, executive director of the budget-watching Concord Coalition. He noted that Democratic President Bill Clinton's budget surplus turned into deficit under Republican George W. Bush.

--Obama may be more willing to compromise with Republicans than in his first two years, but he will fight repealing the health care law. Senate Democrats will almost certainly stop major revisions. If for some reason they don't, Obama will use his veto to stop them.

--Republican attempts to overturn regulations on issues such as global warming also could falter in the Senate. When the EPA announced just before Christmas that it planned to set greenhouse gas emissions standards for power plants and oil refineries, Upton said, "We will not allow the administration to regulate what they have been unable to legislate." Senate Democrats may have a different view.

Many eyes in the new session will focus on Issa, who will have subpoena power and can investigate any government program.

Issa has played good cop and bad cop. He criticized Obama's most important programs, including the economic stimulus. But less than a month after the Republicans won big in November, he had a private peace meeting with Vice President Joe Biden. Neither is shy about entering a political brawl, but initially they have pledged to work together against waste and for openness in tracking government spending.

Issa has not discouraged articles suggesting he will send the administration subpoenas by the trainload. But he also wants to give subpoena power to nonpolitical government watchdogs -- inspectors general -- and let them use that authority to uncover fraud, waste and abuse. With a degree of political cover, Issa could then use those findings to conduct his own investigations.

If the peace pact between Biden and Issa holds, there are other issues where the Obama administration and congressional Republicans can compromise -- as they did on extending Bush-era tax cuts for all, coupled with an extension of unemployment benefits sought by the president.

"The tax code is longer than the Bible, but without the happy ending," Camp has said. "What we need is a comprehensive reform of the tax code that expands the tax base and lowers rates by being fairer, simpler and conducive to growth."

That's not too far, in theory, from Obama's desire to "simplify confusing provisions in the tax code, encouraging saving and creating a tax system that works for all Americans." The challenge will be in reaching agreement on the details.

There could be times when Obama will be closer to Republicans than to liberal Democrats, who were furious that Obama agreed to continue tax cuts for the wealthy -- and to levy inheritance taxes only on the very richest Americans.

Maryland Rep. Steny Hoyer, who is being replaced as the House's majority leader, was asked by a reporter near the end of the last Congress how much trust exits between Obama and liberals.

"On a scale of one to 10 I'm not going to give you how much," he said. "As you know, I'm not willing to kind of create or affirm a breach between the White House and the Congress. I think there's always tension and there should be."