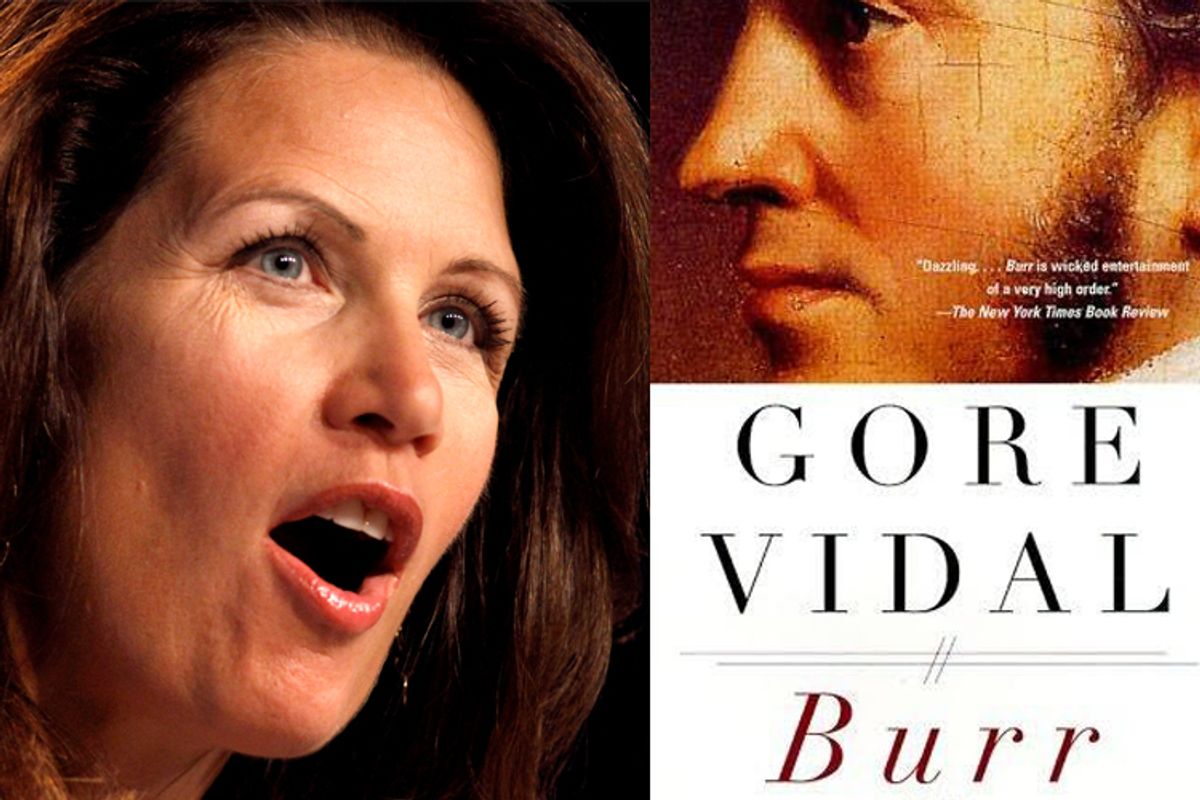 At a rally last week, Republican Rep. Michele Bachmann playfully confessed to having campaigned for Jimmy Carter in 1976. Waiting for the laughter to subside, she went on to say that it was as a junior (elsewhere she has said senior) at Minnesota’s Winona State College, sitting on a train and trying to work her way through Gore Vidal’s 1973 bestseller, "Burr," that she gave up on the volume in her hand and all at once converted to the Republican Party. Vidal’s book was, Bachmann asserted, a founder-hating tome, apparently so violent in its anti-American rhetoric that it redirected her whole system of belief.

Here is how she put it: "He was going after our founders, and he was mocking them, and he was making fun out of them." Loosely based on historical events, "Burr" is purely fictional and fairly cynical, though the critics in 1973 found it quite entertaining. The novel does suggest that the founders were complex, calculating, and not always morally upright–in other words, that the politicians of old were not entirely unlike the politicians of today. But what could possibly have led young Michele, in 1976-77, to see the Republican Party as the moral antithesis of the Carter Democrats, or the Democrats reflected in a "snotty" historical novel?

Think back. In the mid-1970s, the Republican Party was foundering (yes, foundering) in the wake of President Nixon’s resignation and the publication of his embarrassingly coarse and petty and conniving remarks on tape. The vast majority of Americans were disgusted with Nixon, abettor of a criminal conspiracy, his official image tarnished by the foul-mouthed recordings. It seems less than credible that the erstwhile Democrat Michele was more horrified by Vidal’s fiction than by a flesh-and-blood president who left office in disgrace. So, what really made her a Republican? We may never know. But rest assured, with "Burr" she has invented a quaint story for herself, one she knows she can market effectively to her unquestioning devotees in certain parts of the Midwest.

Many thinking people dismiss her as crazy. You hear it all the time. Elsewhere, she has said that God instructed her to go to law school. (One must assume God did not create the tax attorney without considerable forethought.) But calling her crazy doesn’t explain what’s wrong here, any more than reducing her comrade Sarah Palin to a headful of platitudes explains how she retains credibility in certain circles. It’s not only their intellectual vacuity that makes the success of their attention-getting tactics so depressing; it’s how their morally assertive life stories disguise their fundamental dishonesty.

The ten-minute video of Bachmann’s self-justifying speech reveals more than her politically naive logic or her inflexible mind. It exposes a central lie in the autobiography she is selling. She wants the public to believe that she experienced a conversion moment and that “Burr” caused her to see the light -- to understand that “the Democrat Party” failed to appreciate America’s greatness. This was when she supposedly distanced herself from the critical pseudo-intellectuals -- she refers to herself at her moment of epiphany as "a reasonable, decent, fair-minded person" who "revered" the founders and would "lay my life down to defend" the country those singular geniuses gave birth to.

"I knew that that was not representative of my country, and at that point I put the book down in my lap… and I said, you know what, I think I must be a Republican. And from that moment on I recognized that it was the Republican Party, and conservatives in particular, who really got America … unashamed about the values that the founders lived and died and shed their blood and their treasure for; because when they wrote the Declaration of Independence, the greatest document, in my mind, ever written by political geniuses, they wrote that it was a Creator who gave us our rights."

Yes, the Republicans "got" America -- if "got" means the same as seizing the past and returning the founders to the godly throne that they themselves knew they did not occupy. Never mind that Bachmann has no idea who the target audiences of the Declaration were (including potential European allies and banking interests); or how, reproachful and confrontational, it employed hyperbole for propagandistic purposes. For Bachmann, all that matters is removing it from history and making it serve the conservative agenda of today.

Bachmann’s story of self-reinvention uses irony to entertain: She "confesses" that she and her future husband first bonded in 1976 over the promise of then-candidate Jimmy Carter. Presumably, given her God-directed version of America’s mission, the Christian faith of the Georgian was part of his draw. If the story is at all true, Bachmann experienced her railcar epiphany before her still-Democratic husband came around to the gospel truth of conservative values. Did she convert him? They were both, up to that time, "good liberals," she insists. One wonders whether the congresswoman’s husband, a therapist ("Christ is the Almighty Counselor," his web site reads), recalls their political about-face precisely as she does. Was it instantaneous for him, too?

The Bachmann revelation is probably fabricated, but the encounter with Gore Vidal on the train will presumably end up in her (inevitable, following the Palin model) memoir. Is it not curious that the ghostwriter behind the mega-hit “Going Rogue” had a similar reaction to Burr? Before taking Palin under her authorial wing, Christian conservative Lynn Vincent put together "Donkey Cons" -- an unsubtle treatment of the Democratic Party that traced its ostensibly criminal roots to its alleged founder, the "killer and traitor Aaron Burr." Vincent tried to connect Burr to the Tammany Society, which he never joined. Nor was Tammany in 1800 the powerful political machine it became much later in the nineteenth century with the rise of Boss Tweed. For the knee-jerk ideologue, though, Burr and Boss Tweed and Democrats are all cut from the same cloth. Vincent’s is the kind of history one might expect from a lazy high school student doing cursory research on the Internet.

The historical Burr was actually a skilled New York attorney (and state attorney general) who introduced democratic reforms and expanded credit beyond the moneyed elite. In 1800, he secured the electoral votes of his state for Jefferson, which cinched the presidency for the author of the ingenious document Bachmann claims to revere. Yes, Burr did shoot Alexander Hamilton in a duel which Hamilton was at least as responsible as Burr for bringing about. (Note, too, that Hamilton brought the pistols, which had a larger barrel than regular dueling pistols, and a secret hair-trigger, and were therefore much more deadly. Hamilton gave himself an unfair advantage in their duel, and got the worst of it anyway.). As a Revolutionary War hero who planned a private military expedition into Mexico, Burr was of a mindset that Republicans today would applaud: He stood up for America’s continental destiny. He was not guilty of treason, nor was he ever convicted, because there was no evidence, not one credible piece of testimony, and the star witness for the prosecution had to admit that he had doctored a letter implicating Burr.

But such facts inevitably elude the careless student of history who sees texts as malleable artifacts that don’t have to be read in context to be applicable to any hot-button issue. Thus, conservative claims about the Constitution tend to be more symbolic and self-affirming rather than historically drawn. What Bachmann probably could not stomach about Gore Vidal’s "Burr" is its literary irreverence. But, let us remember, it is fiction. As is Bachmann’s hijacking of the founders.

The group she spoke to last week was comprised of veterans, and so to dramatize her story Bachmann fired off the usual artillery, insisting that the founders laid down their lives for our country. To be accurate, until fighting broke out, they regarded themselves as British (which is why Paul Revere would never have said "The British are coming!"). Those we know as patriots recognized that, as rebels, they were traitors in the eyes of their transatlantic brethren. The congresswoman might be interested in knowing that Burr was recognized by the Continental Congress for his valor in the invasion of Canada in 1775. (The Revolutionaries did not just want “freedom”; they also wanted Canada.)

Here’s more: The founders mocked one another, spreading gossip, encouraging newspapermen to write nasty copy, and circulating lies for political advantage. So the question we have for Ms. Bachmann is this: If the founders ridiculed each other on a regular basis, then why is it unpatriotic for a novelist to do so?

The congresswoman might also heed of the words of John Adams in 1790, when he warned of the dangers of idolizing the founders. "The History of our Revolution will be one continued Lye [sic] from one end to the other. The essence of the whole will be that Dr. Franklins electrical rod, smote the Earth and out sprung General Washington. That Franklin electrified him with his rod—and thence forward these two conducted all the Policy, Negotiations, Legislatures and War." Vice President Adams, as a critic of the man under whom he served, was acutely aware that celebrating mythic reputations only diverted citizens’ attention from the duty to judge candidates based on their qualifications. And, Adams added, "the question should not be who has done or suffered the most, or who has been the most essential and indispensable cause of the Revolution, but how is he best qualified to govern us?"

Bachmann’s history of the American founding is hardly more sophisticated than a comic book populated by superheroes and super-villains. She is apparently unaware that the founders vigorously protested blind faith and yearned instead for an educated citizenry possessing the intelligence, reasoning ability, and proper skepticism to separate the fanciful and deceitful from the factual and fair. For self-promoting ideologues, facts are always potentially threatening. And knowing how to capture the media’s attention is not the same as knowing how to apply the lessons of history.

Andrew Burstein and Nancy Isenberg are Professors of History at Louisiana State University and co-authors of "Madison and Jefferson" (Random House, 2010). Isenberg is also the author of "Fallen Founder: The Life of Aaron Burr" (2007).