In my 20s, I laughed at anything vaguely mystical. Forty pounds later, I'm not skeptical -- I'm desperate 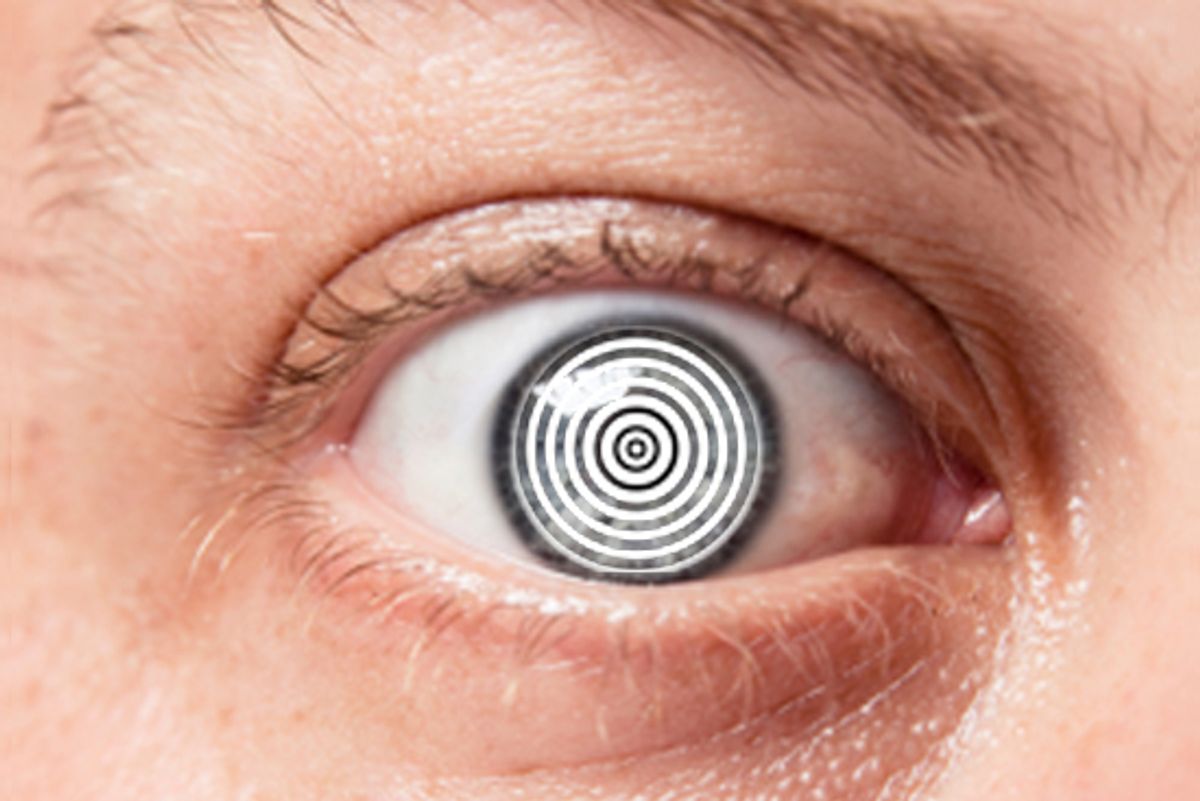 I'm sitting in a hypnotist's office because I am a fat load. There's no other way to put it. I've been "stocky" or "husky" since elementary school. But my most recent weight gain — brought on by a suburban lifestyle, a dead thyroid, a desk job and a fatty parade of cookie tins brought to my house — has called for drastic measures.

My hypnotist's voice has already turned, well, hypnotic. Our first meeting, referred to in the hypnosis literature as the "hypnotizability susceptibility assessment," is where hypnotists size up their clients to gauge levels of skepticism.

He is not a doctor. He does not dangle a pocket watch in front of me. He is what is known in the trade as a "lay hypnotist." I found — let's call him Gary — by Googling "hypnotism" and my hometown, "Albany, NY." His business card bears a sentiment along the lines of "hypnotism really works." The letters after his name are "CH," for "certified hypnotist." According to Dwight F. Damon, president of the National Guild of Hypnotists, there are somewhere between 8,000 and 9,000 dues-paying certified hypnotists in his organization in the United States, and 12,000 worldwide in 72 countries. Hypnotism is routinely covered by HMOs; for my stand-alone hypnotism treatment, however, I pay $160 out-of-pocket for an initial visit, or a package of $295 for a three-session course of treatment.

Gary's office looks like any real doctor's: a pair of comfortable chairs, desk, bentwood chair, pastel art prints. There's a boombox from which he will play Sigur Rós-like hypnotic pulse music, and a couple of board games — The Ungame (Couples Version), Battleship, Boggle. I express admiration of the huge leather recliner, which wouldn't be out of place in the man cave of my stepfather's dreams.

"You won't get to use the big chair today," he says, and smiles.

Gary and I sit in the two comfy chairs and talk about my overeating compulsion. He's a nice guy, personable and unpretentious, in his 50s. He started his practice five years ago.

I tell Gary about how, after a stressful day at work, I'll come home and, instead of steaming vegetables, consume inordinate amounts of Chinese food, pizza, or whichever box of processed starch the pantry yields.

"But you do have self-discipline in other areas," he says. "Maybe you're not responding to these feelings in a satisfying way."

No duh, I think to myself.

This wasn't the first weight-loss treatment I had tried. I cut out wheat and sugar from my diet, forgoing anything breaded or non-agave sweet. I lost 20 pounds in two months. I could wear belts again with deep-breathing exercises. Then, inevitably, I hit a plateau. I could eat tofu and baby carrots all day and wouldn't lose an ounce.

In my 20s I was the lapsed Catholic wisenheimer who made fun of all things vaguely mystical. As I approach middle age, everything from yoga to psychotherapy is cool with me. In recent years, relatives and co-workers have been to hypnotists to quit smoking. One friend sees one to improve his golf game. My wife and I loved having a doula help with the birth of our first daughter. Recently with a talk therapist, I tried Eye Movement Desensitization and Reprocessing to sort out anxiety issues and found it helped. Maybe full-on hypnosis would work for my eating? Ten years and 40 pounds later, I'm not skeptical. I'm desperate.

I settle in my chair, place my feet square on the floor, place forearms on armrests. Gary begins his run-on chant of "positive statements" or "prompts":

Dan, picture yourself at 190 pounds. Picture the shirts you wore and will wear, maybe a rock-band shirt … Picture all that extra fat, the 30 pounds, just falling away, like some gray blob, floating off into space…

I think of the gray blobs and about what brought me here; how, a few weeks back, I thought, "If I can't be thin, at least I can look thin," and purchased a SlimTs top and an Insta Slim shirt, essentially girdles that promise to make dudes look slimmer "without dieting or surgery." Both man-corsets made me feel like a flatulent sausage.

Gary tells me to follow his hands over my head. He tells me to shut my eyes as he lowers them. After a while the movements make my eyes grow tired. He tells me to close my eyes and allow my right arm to be completely limp. I have to concentrate to make sure I don't flinch when he lifts my arm up, and I start to think this is a test to see if we can move on to the next stage. My arm is sufficiently limp, so we move on.

Picture a nice dish of chicken or pork fried rice — and you make yourself a plate, and you start eating it really slow, one rice kernel at a time almost, and you savor the flavor of each piece…

At some point in the middle here I am told to count up to 10 and repeat a couple of words — listen, mind and mind, listen. He plays the background music and snaps his fingers to punctuate what he says.

I listen to my mind, and my mind listens, and I feel like I am back in college, on some rooftop in Philadelphia, tripping on psychedelic mushrooms. I have a friend who wrote a book about Timothy Leary and Allen Ginsberg who told me how Leary used to pipe phrases like the ones I am saying to Gary into roomfuls of people on LSD to evoke hypnotic states.

… and the rest of your plate turns gray, almost like rotten meat or like clouds out in the sky, and you set the rest aside, it's enough, you're full…

The words that Leary used instructed trippers to "relax their restless minds" and "float downstream." I did know that John Lennon, a Leary devotee, liked some of the words so much he used them for lyrics to "Tomorrow Never Knows." What I didn't know was that the Beatle would later curse the phrases Leary used as "stupid." "I destroyed my ego, and I didn't believe I could do anything," he said.

At one moment I think, maybe Gary is destroying my ego. Maybe I have to destroy my ego to lose weight? Focus, I tell myself.

Either way, I am already in some state. Whether it's hypnosis or daydreaming or somnambulism, which is what some of the hypno-literature calls it, I don't know. I call it being slightly freaked out. Either way, I can't get out of my chair.

I remember I didn't flinch or look up when he raised his voice before he snapped his fingers. If I wasn't hypnotized, then I don't know what I was. At the end, he counts down from five, I open my eyes, and I am in a cool fog.

Will this work? Am I going to lose weight? The short answer is maybe.

"If you're looking at whether hypnosis helps people lose weight, the answer is yes," Elgan Baker, a clinical associate professor in the Department of Psychiatry at Indiana University School of Medicine and president of the American Society of Clinical Hypnosis. Baker suggests hypnotism is just as successful as Weight Watchers or South Beach at helping people lose weight. He says nearly 90 percent of people lose weight with hypnotism, though he doesn't cite any studies, and that number sounds a bit ... aspirational. But Baker does tell me that going to my hometown "lay hypnotist" was not the best choice. A better choice, he says, would have been a psychologist who could have worked on my problems more holistically.

The rational side of me agrees with what Baker says, but since when was this whole enterprise rational? Maybe I won't get down to my "dating weight" of 190 pounds. But sitting in the hypnotist's chair — whether it "works" or not — was already a step toward change: It forced me to stop and think about how my whole being, cheesy as it might sound, is interconnected, love handles and all.

I walked out into the cold feeling relaxed. "We habitually live inside our limits of power," William James, the philosopher-brother of novelist Henry James, wrote in 1907. "Suggestion, especially under hypnosis, is now universally recognized as a means, exceptionally successful in certain persons, of concentrating consciousness, and, in others, of influencing their body's states." His notions about the power of 'dynamogenic auto-suggestion' seemed wacky at the time. A century later, the National Institutes of Health lists hypnosis as a mainstream treatment, no longer under "alternative."

When I went home after my session, the first thing I did was make a big sandwich: Trader Joe's salami, garlic-pepper paste, all on a big roll.

"Will some of that turn gray while you're eating it?" my wife jokes as she makes a sensible salad.

None of it turned gray, but I did stop eating it halfway through and put the rest in the fridge. I just felt full.

Daniel Nester's latest book is "How to Be Inappropriate". He teaches writing at The College of Saint Rose in Albany, NY.