The United States, chief critic of the country's atomic aspirations, is not among them 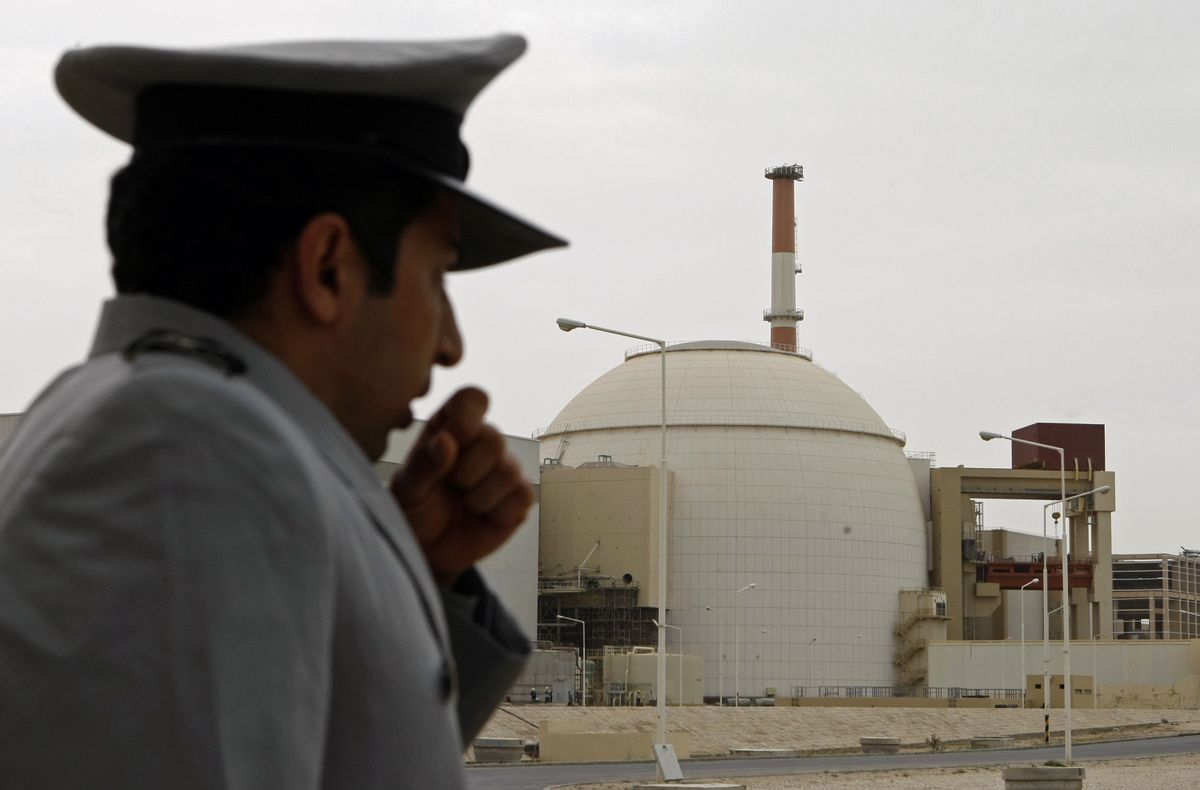 A guard outside a nuclear reactor in Bushehr, Iran. The nuclear power plant was built in cooperation with Russia. (Behrouz Mehri)
--

Iran said Tuesday it had invited the European Union and some other world powers -- but apparently not chief critic the United States -- to tour nuclear sites before the next round of international talks in late January on its disputed nuclear program.

The Associated Press reported the invitation to tour the facilities on Monday, citing a letter from a senior Iranian envoy that suggested Jan. 15-16 for the visit. A diplomat familiar with the letter said Iran invited Russia, China, Egypt, the group of nonaligned nations at the U.N.'s International Atomic Energy Agency, Cuba, Arab League members at the IAEA, and Hungary, which currently holds the rotating EU presidency.

Iran's economy appears to be struggling under the weight of four rounds of international sanctions over its nuclear program, which the West suspects is aimed at producing weapons though Tehran denies that. Iran returned last month to nuclear talks with the so-called 5+1 countries -- the United States, Britain, France, Russia and China, plus Germany -- which hold sway over the sanctions. And the invitation to visit nuclear sites may also be a sign that Tehran is looking for ways to ease its financial pain.

The State Department mocked Iran's offer, calling it a "magical mystery tour." Spokesman P.J. Crowley said the offer is no substitute for Iran fully cooperating with the U.N. nuclear watchdog to prove that its nuclear program is strictly for peaceful purposes and not to build a bomb.

Asked by reporters how the U.S. felt about being excluded from Iran's invitation, Crowley responded sarcastically by saying: "We're just crushed." While he did not urge others to decline the invitation, he did say there is no reason for any country to attend.

Iranian Foreign Ministry spokesman Ramin Mehmanparast confirmed the invitation on Tuesday, saying it went to "the EU, the nonaligned movement and representatives from 5+1 countries." He said Iran would name the countries later and added that the invitation was a sign of Iran's "good will" and greater transparency about its nuclear program.

Mehmanparast did not give a firm date, but said the tour would take place before the January round of nuclear talks.

An Iranian official speaking from a European capital said facilities to be visited include the uranium enrichment facility at Natanz and the Arak site where Tehran is building a plutonium-producing heavy water reactor. Both facilities are considered suspect by the West because they could be used to make the fissile core of nuclear warheads; Tehran's refusal to shut them down has triggered U.N. Security Council sanctions.

The new round of negotiations is meant to explore whether there is common ground for more substantive talks on Iran's nuclear program. A round of talks in Geneva in December yielded no breakthrough.

The Security Council has demanded that Iran freeze uranium enrichment -- a process that can produce both fuel and fissile warhead material. But Iranian negotiators flatly ruled out discussing such demands at the Istanbul meeting, Western diplomats familiar with the talks said.

The offer of a visit comes more than three years after six diplomats from developing nations visited Iran's uranium ore conversion site at Isfahan, which turns raw uranium into the gas that is then fed into enriching centrifuges. Participating diplomats told reporters they could not assess Iran's nuclear aims based on what they saw there.

A diplomat familiar with the invitation said the U.S. and some other Western powers in the group were not invited in an apparent attempt to split the six powers ahead of the next round of planned nuclear talks.

China, and to a lesser degree Russia, have acted to dilute harsh sanctions proposed by the U.S. and its Western allies on the Security Council, leading to compromise penalties enacted by the council that are milder than the West had originally hoped.

On Tuesday, Chinese Foreign Ministry spokesman Hong Lei acknowledged that Beijing has received an invitation and hopes the dispute over Iran's nuclear program would be resolved through dialogue.

The Foreign Ministry of Hungary also confirmed receiving the Iranian letter and said it is discussing the offer with other EU member nations and EU foreign policy chief Catherine Ashton.