Investigators aren't sure they'll ever know the reason for the birds' post-New Year's Eve plunge in Beebe, Ark. 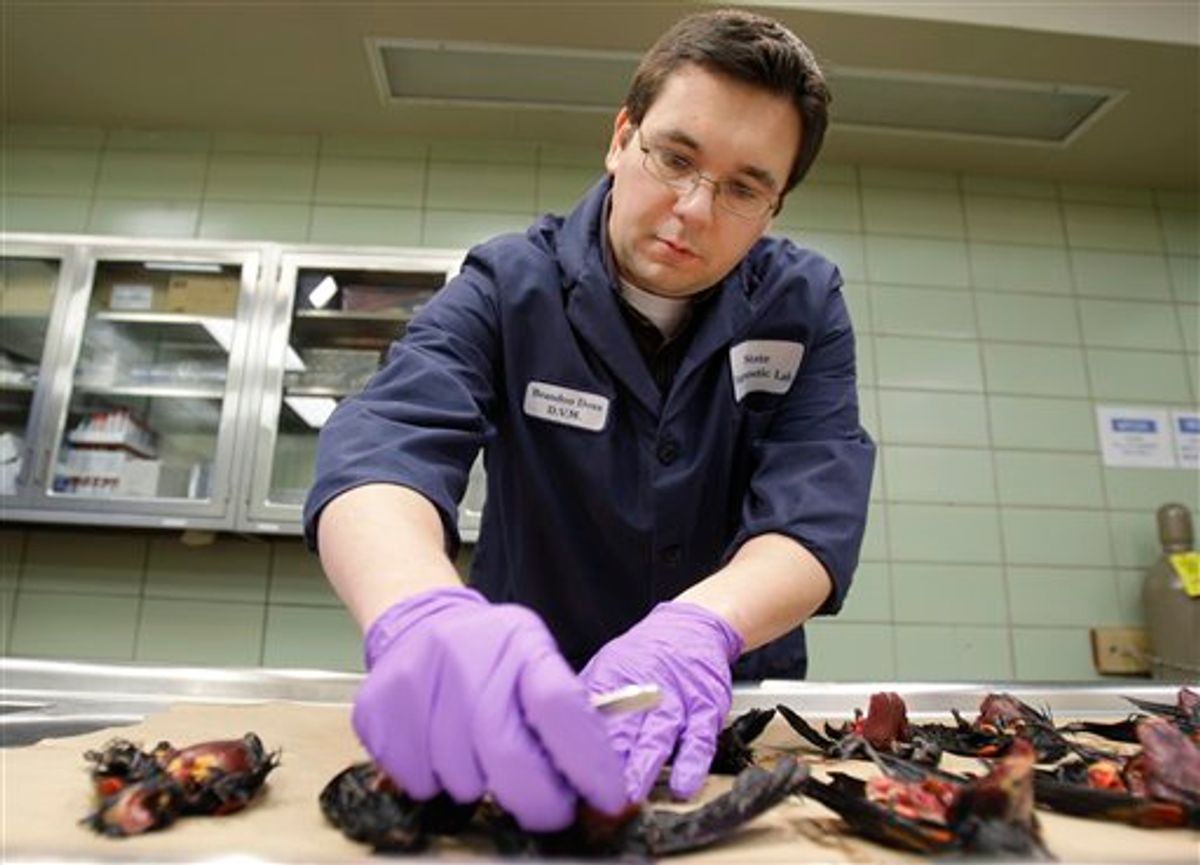 Assistant State Veterinarian Dr. Brandon Doss examines dead red-winged blackbirds at the Arkansas Livestock and Poultry Commission Diagnostic Laboratory in Little Rock, Ark., Monday, Jan. 3, 2011. Scientists are investigating whether bad weather, fireworks or poison might have forced more than 3,000 red-winged blackbirds out of the sky, or if a disoriented bird simply led the flock into the ground. (AP Photo/Danny Johnston) (AP)
--

Celebratory fireworks likely sent thousands of discombobulated blackbirds into such a tizzy that they crashed into homes, cars and each other before plummeting to their deaths in central Arkansas, scientists say. Still, officials acknowledge it's unlikely they'll ever pinpoint a cause with certainty.

So for the small town of Beebe, Ark., where New Year's revelers spent the holiday weekend cleaning up between 4,000 and 5,000 dead red-winged blackbirds, The Mystery of Why the Birds Fell Out of the Sky remains unsolved.

Some speculated that a bout of bad weather was to blame. Others said one confused bird could have led the group in a fatal plunge. A few spooked schoolkids even guessed that the birds had committed mass suicide.

"There was probably some physical reason, but I doubt anyone will ever know what it was," said Thurman Booth, the state's wildlife services director.

The birds were the second mass wildlife death in Arkansas in recent days. Last week, about 83,000 dead and dying drum fish washed up along a 20-mile stretch of the Arkansas River, about 100 miles west of Beebe. Wildlife officials say the fish deaths are not related to the dead birds, and that because mainly one species of fish was affected, it is likely they were stricken by an illness. Full test results could take up to a month.

Some 360 miles to the south of Beebe, Louisiana state biologists were investigating a similar bird die-off. The Advocate reported that about 500 red-winged blackbirds and starlings fell from the sky Monday in Point Coupee Parish, near the city of Labarre. It was not immediately clear if the mysterious mass bird deaths were linked.

While officials examine bird carcasses in Arkansas for signs of disease and labs test the contents of their stomachs for toxins, the tale of the blackbirds' tumble is quickly turning into the stuff of local legend.

The blackbirds rained onto rooftops and sidewalks and into fields. One struck a woman walking her dog. Another hit a police cruiser. Some say an umbrella was one resident's only protection from the falling birds.

Birds were "littering the streets, the yards, the driveways, everywhere," said Robby King, a county wildlife officer in Beebe, a community of 5,000 northeast of Little Rock. "It was hard to drive down the street in some places without running over them."

A few stunned survivors stumbled around like drunken partiers.

There was little light across the countryside at the time, save for the glimmer of fireworks and some lightning on the horizon. In the tumult, many birds probably lost their bearings.

"The blackbirds were flying at rooftop level instead of treetop level" to avoid explosions above, said Karen Rowe, an ornithologist with the Arkansas Game and Fish Commission. "Blackbirds have poor eyesight, and they started colliding with things."

Shane Roberts said it sounded like hail pelting his house.

"I turn and look across my yard, and there's all these lumps," Roberts said.

His 16-year-old daughter, Alex, spent Saturday morning picking them up with her bare hands. "Their legs are really squishy," she said.

For some people, the scene unfolding shortly before midnight evoked images of the apocalypse and cut short New Year's celebrations. Many families phoned police instead of popping champagne.

"I think the switchboard lit up pretty good," said Beebe police Capt. Eddie Cullum. "For all the doomsdayers, that was definitely the end of the world."

Paul Duke filled three five-gallon buckets with dead birds on New Year's Day. "They were on the roof of the house, in the yard, on the sidewalks, in the street," said Duke, a suspension supervisor at a nearby school. A few dead birds still littered town streets Monday. The city hired an environmental company that got rid of the dead birds. The disposal company declined to talk to reporters.

The birds will not be missed. Large roosts like the one at Beebe can have thousands of birds in one tree that leave ankle- to knee-deep piles of droppings in places.

"The whole sky turns black every morning and every night," Roberts said, as a few live birds chirped and hopped from tree to tree behind his home.

Red-winged blackbirds are among North America's most abundant birds, with somewhere between 100 million and 200 million nationwide, according to the Cornell Lab of Ornithology in Ithaca, N.Y.

Rowe said Tuesday that between 4,000 and 5,000 birds had died in Beebe. That's up from initial estimates of 3,000, she said, because hungry cats and dogs likely snatched up lots of carcasses overnight.

The Game and Fish Commission shipped carcasses to the Arkansas Livestock and Poultry Commission and the National Wildlife Health Center in Madison, Wis. Researchers at the University of Georgia's wildlife disease study group also asked for a set of birds.

A few grackles and a couple of starlings also were among the dead. Those species roost with blackbirds, particularly in winter.

"They died from massive trauma," said Game and Fish Commission spokesman Keith Stephens, citing a report from the state poultry lab where the birds were examined.

"They started going crazy, flying into one another," Stephens said.

The area where the birds fell is too large to determine if any specific blast rousted the birds, Police Chief Wayne Ballew said.

"It was New Year's Eve night. Everybody and their brother was shooting fireworks," the chief said. The city allows fireworks only on New Year's Eve and Independence Day.

Bad weather has been blamed for earlier bird kills in Arkansas.

In 2001, lightning killed dozens of mallards at Hot Springs, and a flock of dead pelicans was found in the woods about 10 years ago, Rowe said. Lab tests showed they, too, had been hit by lightning.

In 1973, hail knocked birds from the sky at Stuttgart, Ark., on the day before hunting season. Some of the birds were caught in a violent storm's updrafts and became encased in ice before falling from the sky. Some were described as bowling balls with feathers.

Earlier Friday, a tornado had killed three people in Cincinnati, Ark., about 150 miles away, but most of the bad weather had passed Beebe when the birds died.

Rowe initially said poisoning was possible, but unlikely. Birds of prey and other animals, including dogs and cats, ate several of the dead birds and suffered no ill effects.

"Every dog and cat in the neighborhood that night was able to get a fresh snack," Rowe said.