The Republicans who should fear the Tea Party the most 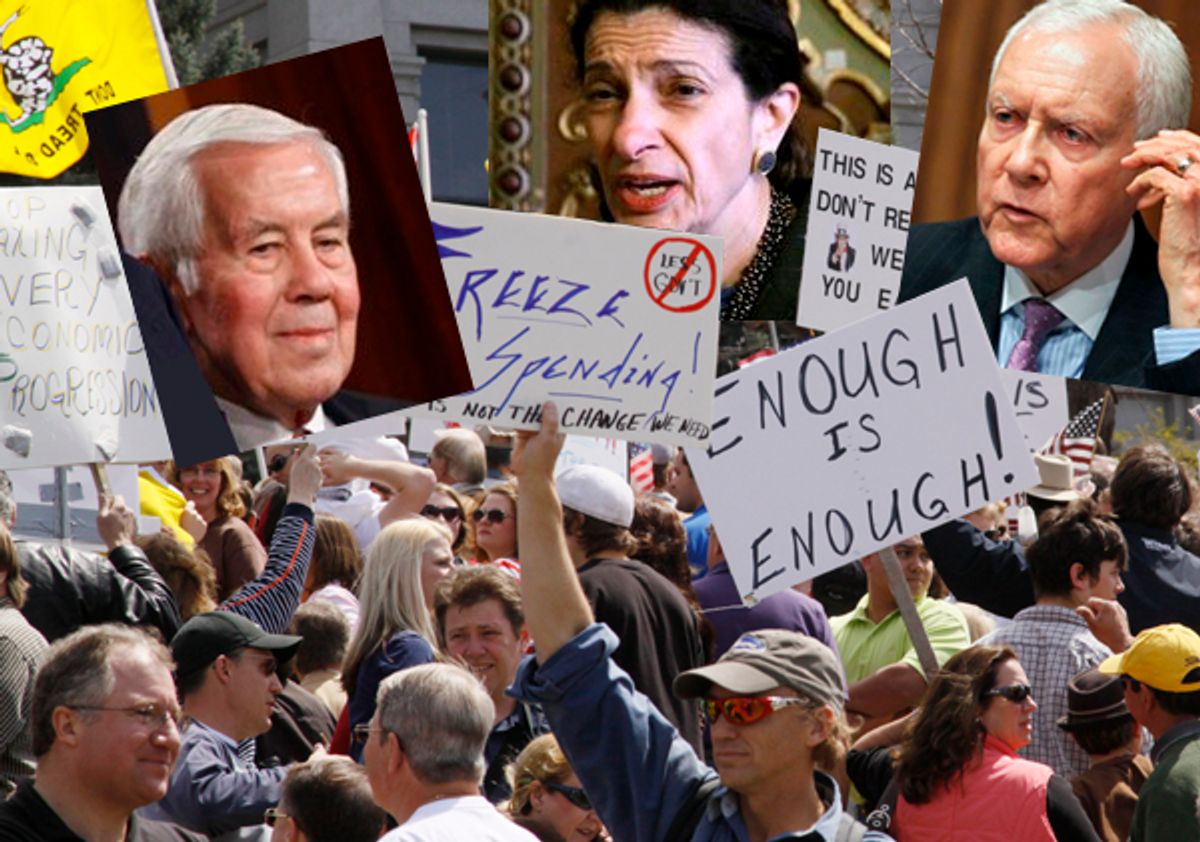 Perhaps the biggest lesson of the 2010 elections is that in the age of Obama, it doesn't take much for a Republican leader to run afoul of the GOP base (aka the Tea Party). Just like they were in the late 1970s, conservatives are actively engaged in what amounts to a purification campaign, using party nominating contests to purge (supposed) ideological apostates from the GOP. In '10, this meant surprise defeats for, among others, Sen. Robert Bennett in Utah, Rep. Michael Castle in Delaware, and the protégé of the the Senate's Republican leader in Kentucky (Trey Grayson).

There's little reason to think the GOP's Tea Party base will be any less restive these next two years. With Republicans running the House -- their takeover will be official on midday Wednesday -- but not the Senate and White House, compromises will be necessary to keep the government running. But saying yes to compromise (on, say, extending the debt ceiling, or passing a budget that allows funding for "ObamaCare"), no matter how essential from a governing standpoint, could expose Republican congressmen and senators to grave political risk in '12. Every major compromise with President Obama has the potential to be 2012's equivalent of TARP. Jim DeMint, the South Carolina senator who backed several Tea Party primary challenges last year, drove this point home earlier this week when he sent an e-mail to his financial supporters with the subject line "Say No to RINOs in 2011."

This risk is especially acute for a handful of high-profile Republicans, whose standing with the Tea Party crowd is already suspect. Here's a look at who should be most worried about crossing the GOP base in the new Congress:

Sen. Richard Lugar: The 78-year-old Indiana Republican is up in '12 and was already flirting with trouble with the Tea Party before last month's lame duck session -- when he voted to kill the GOP's filibuster of the Dream Act and was a prime mover of the New Start treaty. A collection of Tea Party candidates won a combined 61 percent in an open GOP Senate primary in Indiana last year (although Dan Coats, the establishment choice, was able to squeak by with 39 percent because there were so many Tea Party-friendly candidates); now there is talk that in '12, activists will unite early around state Treasurer Richard Mourdock. Lugar seems aware of the potential threat and has taken some steps to bolster his credibility with the right (voting against repeal of "don't ask, don't tell" last month, for instance), but with the Senate poised these next two years to serve as the graveyard for symbolic Tea Party legislation passed by the House, there could be plenty of new reasons for the right to target him.

Sen. Orrin Hatch: Given that he launched his Senate career in part by running against the Equal Rights Amendment in 1976, it's somewhat jarring to consider that Hatch is now seen as a traitor by many on the right. But that's what three-plus decades in Washington and a vote for TARP can do to you. Hatch, particularly after watching his colleague Bennett's career crash and burn last year, has been frantically courting the Tea Party crowd. But he's likely to face a challenge for the GOP nomination in '12 from Jason Chaffetz, a much younger second-term congressman with impeccable Tea Party credentials and none of Hatch's black marks. And the nomination could be awarded at the state GOP convention, a gathering of a few thousand of the state's most conservative Republicans; Hatch would need at least 40 percent at the convention to force a primary. Failing to meet this threshold was Bennett's undoing.

Sen. Scott Brown: Amazingly, some Tea Party leaders are now openly talking up the idea of a primary challenge against Brown, who has broken with the GOP on several major issues -- most notably a jobs bill, Wall Street reform and DADT repeal -- since assuming Ted Kennedy's old Senate seat a year ago. There's no obvious candidate to oppose Brown, who has built a formidable war chest and scored surprisingly well in statewide polling. But purity tests are not unheard of even in Massachusetts Republican politics: Just ask Elliott Richardson, who was favored to win the state's 1984 Senate race, only to lose the GOP primary to conservative Ray Shamie. (On second thought, maybe you shouldn't ask Richardson, since he's been dead for 11 years.)

Sen. Olympia Snowe: That Snowe will receive some kind of primary challenge from her right in '12 is almost inevitable at this point. What's unclear is how much this worries her (enough to make her say no to compromises she'd otherwise embrace?). Snowe does have an ally with impeccable Tea Party credentials, Maine's new Republican governor (Paul LePage), in her corner. But even if she gives the Tea Party more ammunition to attack her, she may have a trump card: an independent candidacy. Maine is one of the friendliest states in the union when it comes to third-party candidacies, and Snowe enjoys broad statewide popularity; she only has a problem with her own party's base.  It's not at all hard to imagine her running as an independent and winning -- easily.

Sen. John Thune: The South Dakotan won't be up for reelection until 2016, but he (supposedly) has his eyes on the White House. He also voted for TARP and requested a ton of earmarks -- potential reasons for activists and primary voters to judge him insufficiently conservative and to tune him out. Thune may be one "bad" vote away from disqualifying himself for the GOP presidential nomination, if he hasn't already done so.

Just about every Republican in the House: Bob Inglis racked up a reliably conservative record representing South Carolina's 4th District in the House for six terms. But "Bailout Bob" voted for TARP in 2008 and found himself on the receiving end of a Tea Party primary challenge last year. He barely made it into a runoff, which he then promptly lost by more than 40 points. Every Republican in the House will stand for reelection in 2012, and many of them -- especially those in the large freshman class -- aren't that well-known or -established in their districts. The lesson of Inglis' story ought to be clear to them: Pick the wrong issue to break with the GOP base, and all bets are off.