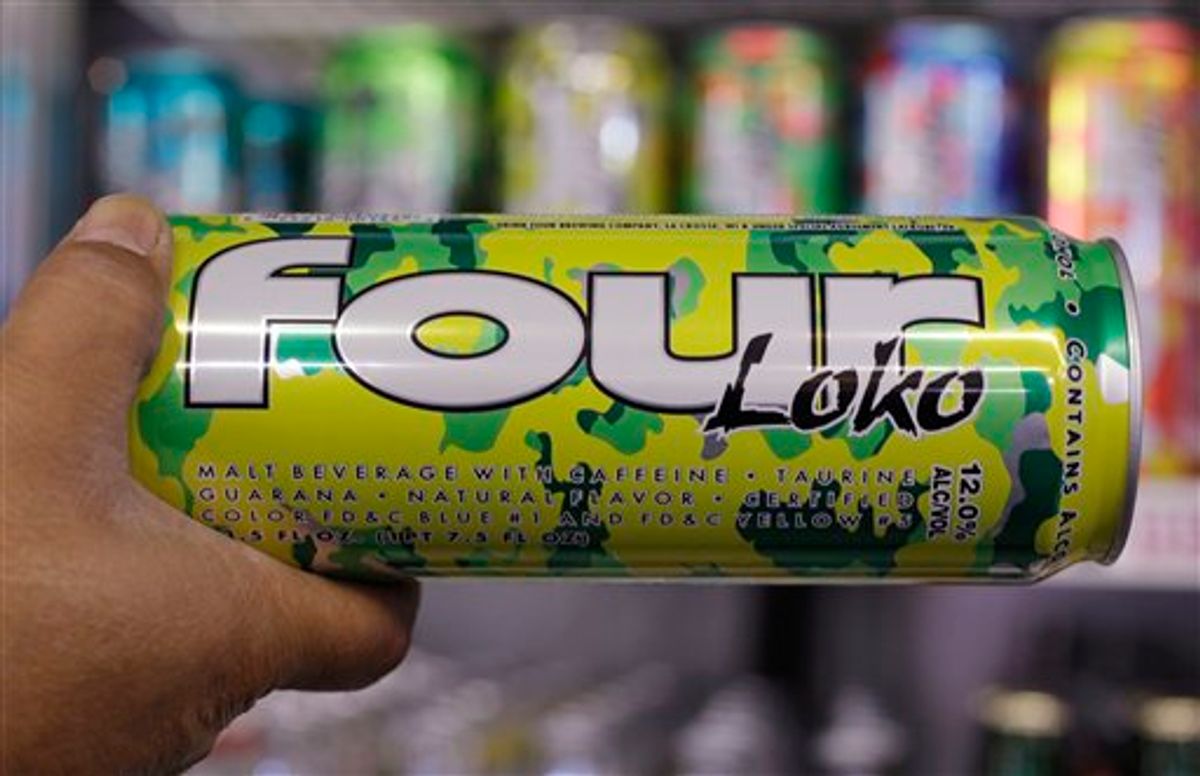 A can of Four Loko is displayed at a liquor store in Palo Alto, Calif., Monday, Oct. 18, 2010. After students at northern New Jersey's Ramapo College were hospitalized because of the effects of Four Loko _ which contains caffeine, other common energy-drink ingredients, and as much alcohol as four beers _ the college president ordered last month that it and similar drinks be banned. He's encouraging other colleges and the state to follow suit. (AP Photo/Paul Sakuma) (AP)
--

Truckloads of Four Loko and other alcohol-laced energy drinks are being recycled into ethanol and other products after federal authorities told manufacturers the beverages were dangerous and caused users to become "wide-awake drunk."

Wholesalers from Virginia, North Carolina, Maryland and other East Coast states started sending cases of the high-alcohol, caffeinated malt beverages to MXI Environmental Services in Virginia after the U.S. Food and Drug Administration announced a crackdown on the sale of such beverages in November.

Brian Potter, vice president of operations at MXI's facility in Abingdon, Va., said about a couple of hundred truckloads of the drinks would be coming to the plant. Each truck holds 2,000 cases of the 23.5-ounce cans.

MXI Enterprises is one of three facilities in the U.S. that recycle ethanol, according to the American Coalition for Ethanol, an industry group. Potter said Thursday that his competitors also are taking shipments of the drinks.

"We're equipped to process four truckloads a day, and we're at full capacity," he said. "There are about 30 different products involved, and we've only seen a couple of them at this point. It could go on for several months."

FDA Commissioner Margaret Hamburg said at the time that consuming the drinks has led to alcohol poisoning, car accidents and assaults.

Health experts have raised concerns that the caffeine can mask a person's perception of intoxication, leading them to drink more than they typically would before passing out. Many of those who consume the drinks are college-age and underage drinkers.

The four companies decided to pull their beverages from stores or reformulate them to remove caffeine or other stimulants after the FDA's ruling. Under pressure from states' attorneys general, Anheuser-Busch and MillerCoors removed their Bud Extra, Tilt and Sparks drinks from the market two years ago.

In Virginia, wholesalers have been buying back the canned drinks from retailers to get them off the market, said Virginia Department of Alcoholic Beverage Control spokesman Philip Bogenberger.

In addition to accepting the drinks from wholesalers, MXI has a contract to take Phusion Projects' discontinued Four Loko beverages.

MXI distills the alcohol from the drinks, then sells the fuel to be blended into gasoline, Potter said. It sells the aluminum cans to a recycler. Potter estimated it takes "30 days until it's back on the shelf as another beer can." It also recycles the drinks' water, cardboard packaging and shipping pallets.

"These are actually things that could go directly into a landfill or incinerator or some other waste process that's not as environmentally friendly, so I think it's a good thing," he said.