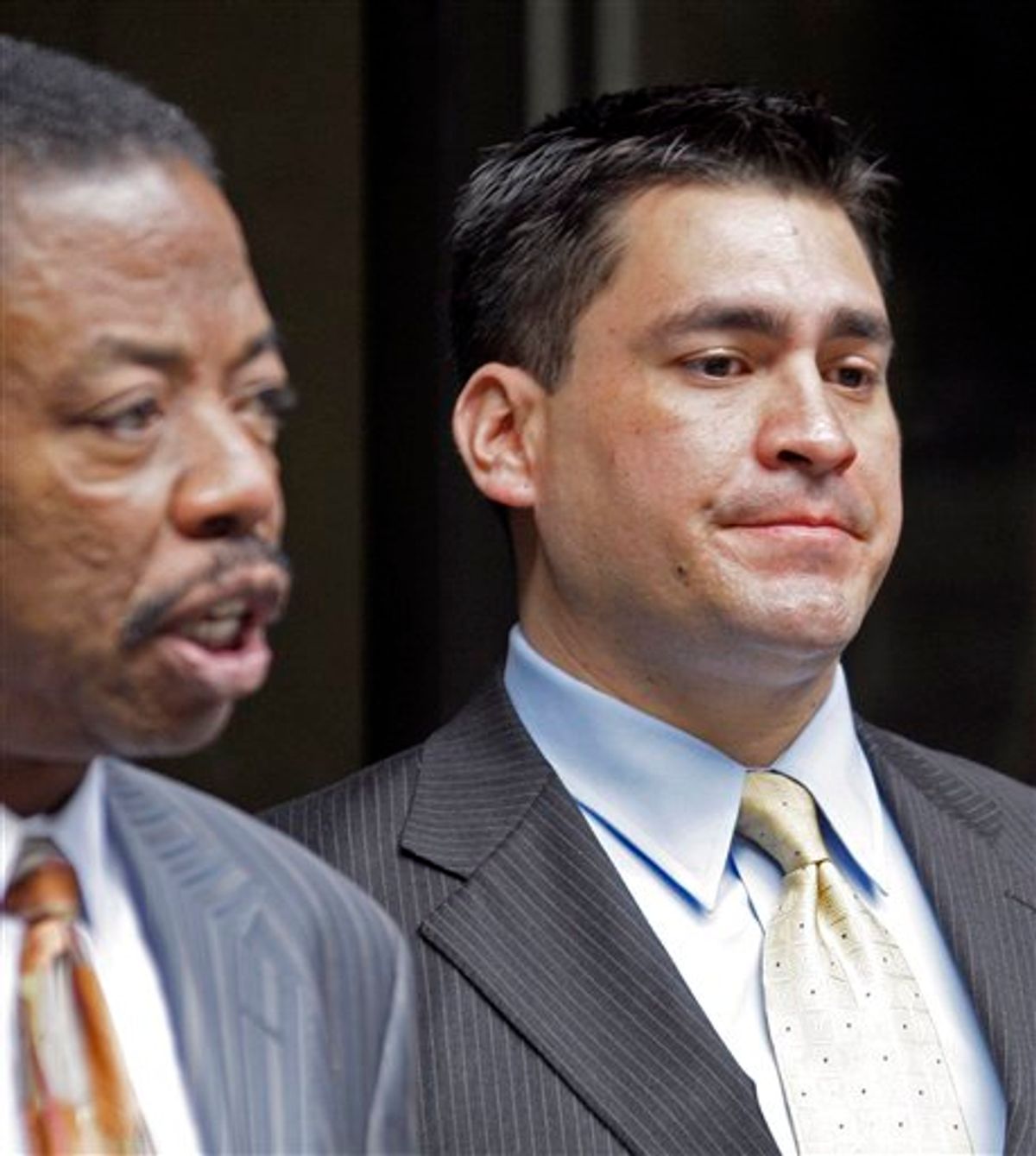 Security guard Alberto Alvarez, right, listens as his attorney Carl Douglas talks to reporters as they leave the preliminary hearing for Michael Jackson's doctor Conrad Murray who is charged in the death of the singer, at Los Angeles Superior Court, Wednesday, Jan. 5, 2011. (AP Photo/Reed Saxon) (AP)
--

A paramedic sent to Michael Jackson's mansion says he saw the doctor charged in the singer's death scoop up three bottles of lidocaine from the floor and place the vials in a bag during efforts to revive the pop star.

Paramedic Martin Blount testified Thursday he was surprised to see the bottles because Dr. Conrad Murray had told paramedics he hadn't given Jackson any drugs.

He says Murray also produced a hypodermic needle at one point and wanted to use it on the singer. Blount says he and fellow paramedics refused.

He described Murray as frantic and sweating profusely.

The medic is the seventh witness called at a multi-day preliminary hearing after which a judge will determine whether there is enough evidence for Murray to stand trial for involuntary manslaughter.

The Houston-based cardiologist has pleaded not guilty.

LOS ANGELES (AP) -- The career paramedic dashed into Michael Jackson's bedroom, looked around and listened to a doctor's explanation for why the singer was ostensibly lifeless and came to the conclusion that things didn't add up.

Richard Senneff said the gaunt patient, an IV stand and bag next to the bed and the presence of Dr. Conrad Murray pointed more to a hospice patient, not an international pop superstar about to embark a series of London concerts.

Although the doctor said he was treating Jackson for dehydration and exhaustion and he had just passed out, Senneff recalled how the singer's legs were cold and limp, his open eyes dried out, and his hands and feet turning blue. The doctor never mentioned that he had given Jackson propofol, a powerful anesthetic that authorities say killed the musician, Senneff said.

The medic's testimony during the second day of Murray's preliminary hearing was the latest in a series of witnesses to describe Jackson as lifeless by the time help was summoned.

Senneff will return to the stand on Thursday for defense questioning, which so far hasn't elicited any major contradictions in the prosecution's case.

Deputy District Attorney David Walgren described Murray's actions as "an extreme deviation from the standard of care" -- ranging from his use of propofol in Jackson's bedroom, not telling medical personnel about it and improperly administering CPR.

Murray, facing four years if convicted of involuntary manslaughter, has pleaded not guilty. His attorneys say the Houston-based cardiologist did not give Jackson anything that "should have" killed him.

Senneff's testimony came after one of Jackson's former bodyguards, Alberto Alvarez, testified that Murray told him to place medicine vials and an IV bag in other bags before calling 911.

The 34-year-old bodyguard was the only other person in the room with Murray while frantic efforts were being made to revive Jackson.

Alvarez said he was "frozen" at the sight of Jackson laying in bed, a urinary catheter attached and his eyes and mouth open.

"I said, 'Dr. Murray, what happened?' And he said, 'He had a reaction. He had a bad reaction,'" Alvarez recalled.

The singer's children, Prince and Paris, walked into the room at one point and the young girl screamed, "'Daddy!" and started to cry, Alvarez recalled. At the doctor's urging, he ushered them out of the room.

In the courtroom audience, Jackson's mother, Katherine, dabbed at her eyes during the most detailed public account yet of events surrounding the death of her son. She came to court with her husband, Joe, and children Randy, Janet and LaToya. They made no eye contact with Murray across the courtroom.

They heard Alvarez testify that he helped Murray bag the medicine and saw an unidentified "white milky substance" in the bottom of an intravenous bag.

"He just grabbed a handful of bottles, or vials, and he instructed me to put them in a bag," Alvarez testified, adding that Murray also told him to place an intravenous bag into another sack.

After collecting everything and bagging it, Alvarez said, Murray told him to call 911.

Four minutes later, Senneff and his crew arrived at Jackson's rented mansion in the Holmby Hills area of Los Angeles.

He said Wednesday that he saw no signs of the propofol or the other sedatives ultimately found in Jackson's body, and Murray made no mention of the anesthetic as paramedics rushed to try to find some way to save the singer.