The truth about dead birds falling from the sky

Dead animals are falling from the sky and pooling in the oceans all over the world. Does it matter? 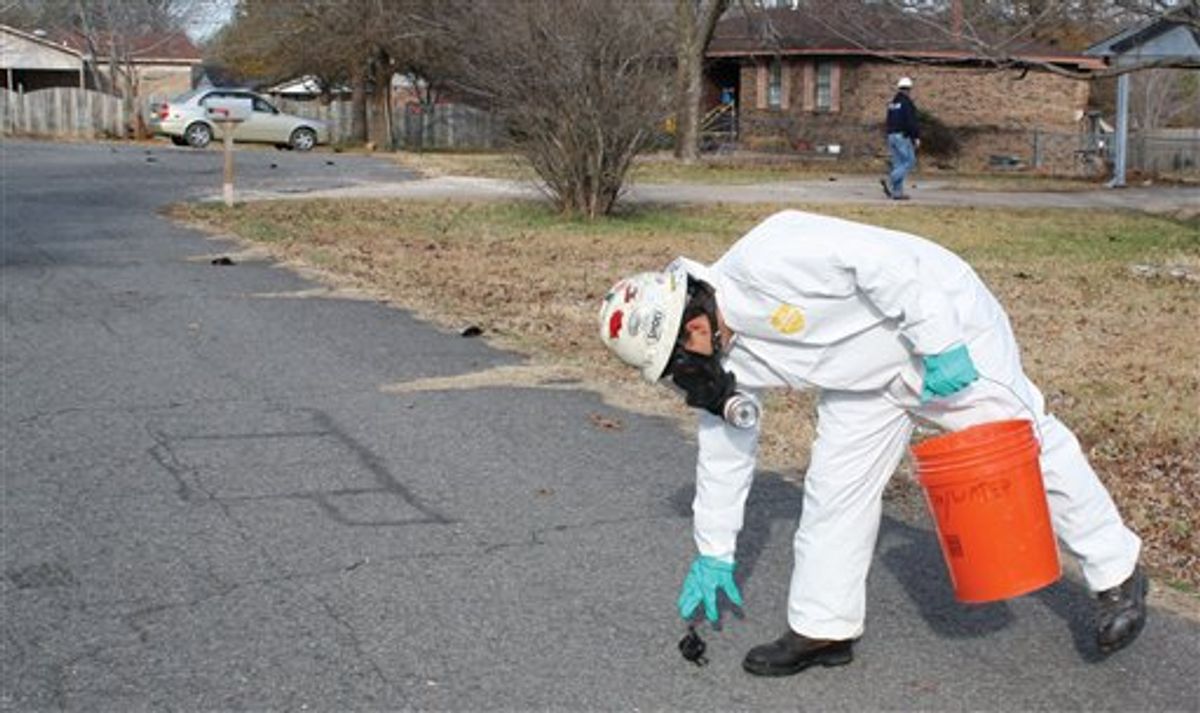 A worker with U.S. Environmental Services, a private contractor, picks up a dead bird in Beebe, Ark. on Saturday, Jan. 1, 2011 as more can be seen on the street behind him. The Arkansas Game and Fish Commission said Saturday more than 1,000 dead black birds fell from the sky in Beebe. The agency said its enforcement officers began receiving reports about the dead birds about 11:30 p.m. Friday. (AP Photo/The Daily Citizen, Warren Watkins) RETRANSMISSION FOR LARGER FILE (AP)
--

People flocked to see the latest round of dead birds -- "heaped in flower beds" and "horribly hung from trees like Christmas ornaments" -- in Faenza, Italy. According to a national activist paper, thousands of dead birds appeared over the weekend with unusual blue markings on their beaks. What kind of birds? Turtle doves.

This most recent happening comes on the heels of similar reports of massive animal deaths in Arkansas (blackbirds), Kent (crabs), Sweden (crows), Virginia (fish), Louisiana (more blackbirds), and Vietnam (red tilapia). Either an alien race with a taste for Edgar Allen Poe is about to invade, or science has an explanation.

More theories include: fireworks, cold water, being "scared to death" -- see earlier Poe reference -- and good ol' global warming. But after days of head scratching and even more goofball theories, science comes to the rescue!

According to the AP, there's nothing to worry about. Biologists say this kind of thing happens all the time:

The reality, say biologists, is that these mass die-offs happen all the time and usually are unrelated.

Federal records show they happen on average every other day somewhere in North America. Usually, we don't notice them and don't try to link them to each other.

And as much fun as journalists have been having with all of the puns and idioms and literary references this kind of story enables, there are bigger fish to fry: Today is National Tempura Day.