One newspaper says he's looking at it, and now he's suddenly taking jabs at another potential candidate 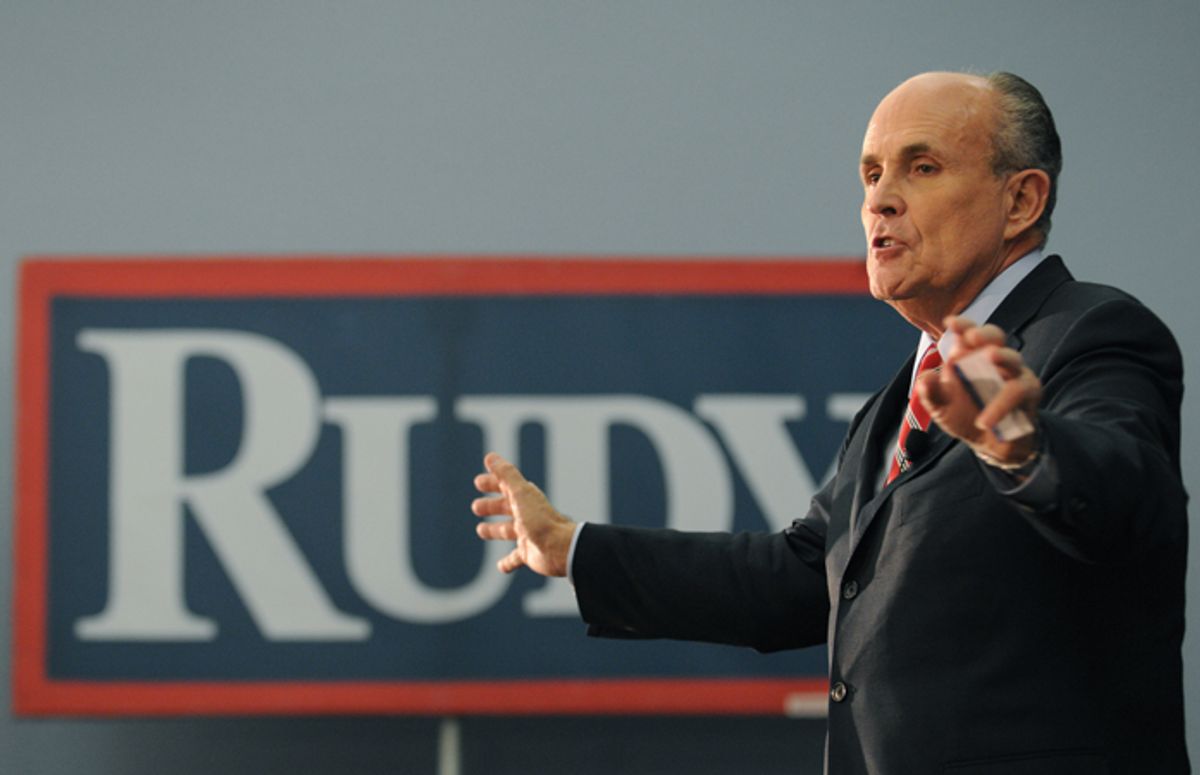 Take it for what it's worth: Page 6, the New York Post's gossip sheet, is claiming that Rudy Giuliani is gearing up for a second presidential bid in 2012:

Sources say the tough-talking former mayor "thinks the Republican race will be populated with far-right candidates like Mitt Romney, Sarah Palin and Mike Huckabee, and there's opportunity for a moderate candidate with a background in national security."

Giuliani has even scheduled a trip to New Hampshire for next month to meet with constituents in the state that failed him in January 2008, when he placed fourth in the Republican presidential primary.

It's easy enough to dismiss this, although it's also worth noting that, just as the Post was hitting the streets this morning,  Giuliani appeared on MSNBC's "Morning Joe," where he took a shot at another potential '12 GOP candidate, Chris Christie. Asked about the New Jersey governor's unapologetic absence from his state during the post-Christmas blizzard (he was in Florida with his family), Giuliani replied, "Chris should've come back. I mean, if he asked me my advice, I would've said 'They elected you governor, they've got an emergency, they expect you to be there.' You know, you've got to be there if you're a governor, a mayor, or even a president, if it's important enough."

Now, as shots go, this is a relatively tame one. And would you really expect Giuliani, a.k.a. Mr. 9/11, to make excuses for any mayor or governor who didn't think it was important to be on hand for a major emergency event? Still, it is somewhat jarring when you consider the close geographic and professional ties between the men; Giuliani's '08 White House campaign was managed by the same operative (Mike DuHaime) who managed Christie's '09 effort in New Jersey, and Giuliani actually made several appearances on Christie's behalf in '09. Whether there's room for either Giuliani or Christie in the '12 GOP race is open for debate; but there's almost certainly not room for both of them. If Giuliani really is interested in '12, it's clearly in his interests to puncture the Christie bubble as quickly as possible.

Of course, I find it doubtful that Giuliani will end up running again, mainly because nothing about his '08 campaign suggests there's much of an appetite for him among Republican primary and caucus voters. Plenty of candidates from both parties have run again four years after waging unsuccessful campaigns for presidential nominations, but -- except for the Kucinich-type gadflies -- they've all distinguished themselves the first time out. Ronald Reagan nearly toppled Gerald Ford in the 1976 GOP primaries, which made him the instant frontrunner for 1980; Jerry Brown won five late Democratic primaries and caucuses in 1976, which put him on the radar for 1980; Jesse Jackson earned 3.5 million votes and broke through in several caucuses in 1984, justifying a follow-up run in 1988; Gary Hart battled Walter Mondale all the way to the convention in '84, which certified him as the '88 frontrunner (a perch he gave up when the Donna Rice scandal broke in early 1987); Pat Buchanan exceeded expectations in New Hampshire in 1992, making a '96 effort a no-brainer; Steve Forbes and Lamar Alexander were credible enough in 1996 (remember that when initial New Hampshire returns showed Alexander running ahead of him, Bob Dole told his aides that he'd drop out of the race) to warrant repeat efforts in 2000; and John Edwards' 2004 near-miss in Iowa (the contest that essentially settled the Democratic nomination) made him an '08 contender.

Giuliani just doesn't fit in with this crowd. His campaign began with high poll numbers and plenty of hype, but he was a non-factor in every GOP contest he entered in '08. His flame-out that evoked memories of John Connally in 1980 and Phil Gramm in 1996 -- and neither one of them was ever touted as a White House contender again. The media's version of Giuliani's '08 effort tends to treat his decision to put all of his chips on Florida's January 29 as his fatal decision; by skipping Iowa, New Hampshire, Michigan and South Carolina, the story goes, he left an opening for John McCain to gain momentum, guaranteeing that Giuliani would be an afterthought to Floridians by the time their primary rolled around. But this version of history ignores the reason why Rudy waited until Florida: It was a last resort strategy necessitated by his slumping standing in Iowa and New Hampshire. As late as the fall of 2007, he was vigorously contesting New Hampshire, with plans for a concerted and pricey late push. But then McCain's numbers in the state came back to life; Giuliani ultimately decided to try to stretch out the game, rather than making New Hampshire his make-or-break state.

The point is that Giuliani didn't fail in 2008 because of a bad strategy. His bad strategy was a result of his failure to gain traction in any of the early primary and caucus states. Republican voters, it was clear by the end of 2007, liked him well enough and were happy to have him in their party, but they weren't about to make a pro-choice, pro-gay rights ex-New York mayor their presidential standard-bearer. Nothing that Giuliani has said or done since '08 is likely to change this reality. He is not like Bob Dole, who barely registered in the 1980 GOP primaries, then returned to the Senate, became majority leader, and nearly derailed George H.W. Bush in 1988; Giuliani hasn't reinvented himself since '08, or given Republicans any reason to view him any differently. If anything, he's in a worse position as '12 approaches, with memories of his 9/11 leadership fading.

If Giuliani is actually eying '12, it's understandable at a certain level. The GOP field looks wide open; you can make a strong case why any of the major prospective candidates can't win the nomination. But don't forget: The same thing was true in late 2007. Back then, the main reason to believe Giuliani could win the nomination was that it was hard to see any of his GOP rivals doing it themselves. And yet, he failed -- miserably. Here's guessing he won't be back for more punishment in two years.