Science confirms: Women's crying is a turnoff for men 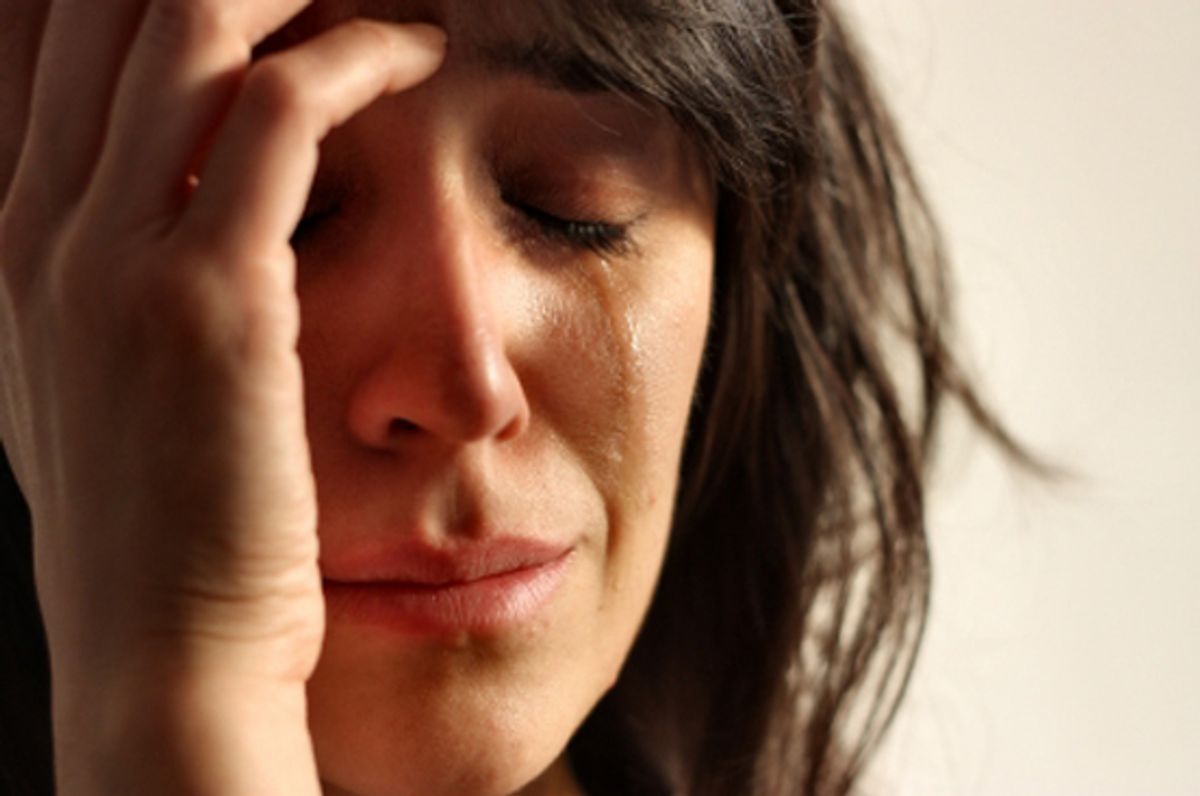 If a crying woman's red nose isn't a big enough turnoff to a man, a surprising experiment found another reason: Tears of sadness may temporarily lower his testosterone level. Those tears send a chemical signal as the man gets close enough to sniff them -- even though there's no discernible odor, say researchers from Israel's Weizmann Institute of Science.

It's the first such signal to be found in tears, and it's probably not unique to women's. Theirs just were the first to be studied.

"It's hard to get men to volunteer to cry" in a lab, noted Weizmann neurobiologist Noam Sobel, senior author of the study appearing in Friday's edition of the journal Science.

Emotional tears are chemically different from the reflex tears that form when you get dust in your eye. But biologists have long puzzled over the true function of emotional tears: Are they merely cathartic, or do they have some other physiological role?

Mice can produce a sort of tear that contains a pheromone, an odorless molecule that triggers basic instincts in many animals. So Sobel's team tested whether human tears similarly can convey subliminal chemical signals through the nose. After all, we tend to hug a crying loved one, putting our nose near their tears.

First, some women volunteered to watch a sad movie in the lab and collect their tears in a vial. For a comparison, researchers trickled saline down the women's cheeks and collected those droplets, too.

Healthy young men couldn't smell a difference between the real tears and the sham ones.

Then came a series of tests: The men were given women's photographs to rate. When they sniffed actual tears, they found the women less sexually attractive than when they sniffed saline. And to researchers' surprise, sniffing actual tears didn't make the men empathetic.

Also, saliva tests of testosterone levels found a dip in that hormone after they sniffed tears but not the salt water. Finally, when they sniffed tears and then watched a sad movie inside a brain-scanning MRI machine, the men showed less activity in neural networks associated with sexual arousal.

"We have never looked at tears in this way before," said Dr. Esen Akpek of Johns Hopkins University's Wilmer Eye Institute, who wasn't involved with the new study. "This is really interesting."

The findings make sense, she said, because the glands that secrete tears bear receptors, or docking ports, for sex hormones -- a connection most clearly seen with dry eye, which is most common in postmenopausal women.

Why would our tears have evolved a "chemosignal" to function as a sign of sexual disinterest? It's possible that's a proxy for lowering aggression, acknowledged Sobel, who now is trying to identify the molecule doing the work.

For now his findings suggest "the signal is serving to time sexual behavior. It is a signal that allows its user to say, 'Now is not the right time.' I predict there are other signals that say, 'Now it is,'" Sobel said. "This is just one of many chemosignals."