Republican deficit hypocrisy off to a great start on defense spending

While the national debt is the most important issue in the world, we mustn't cut a single dollar from the Pentagon 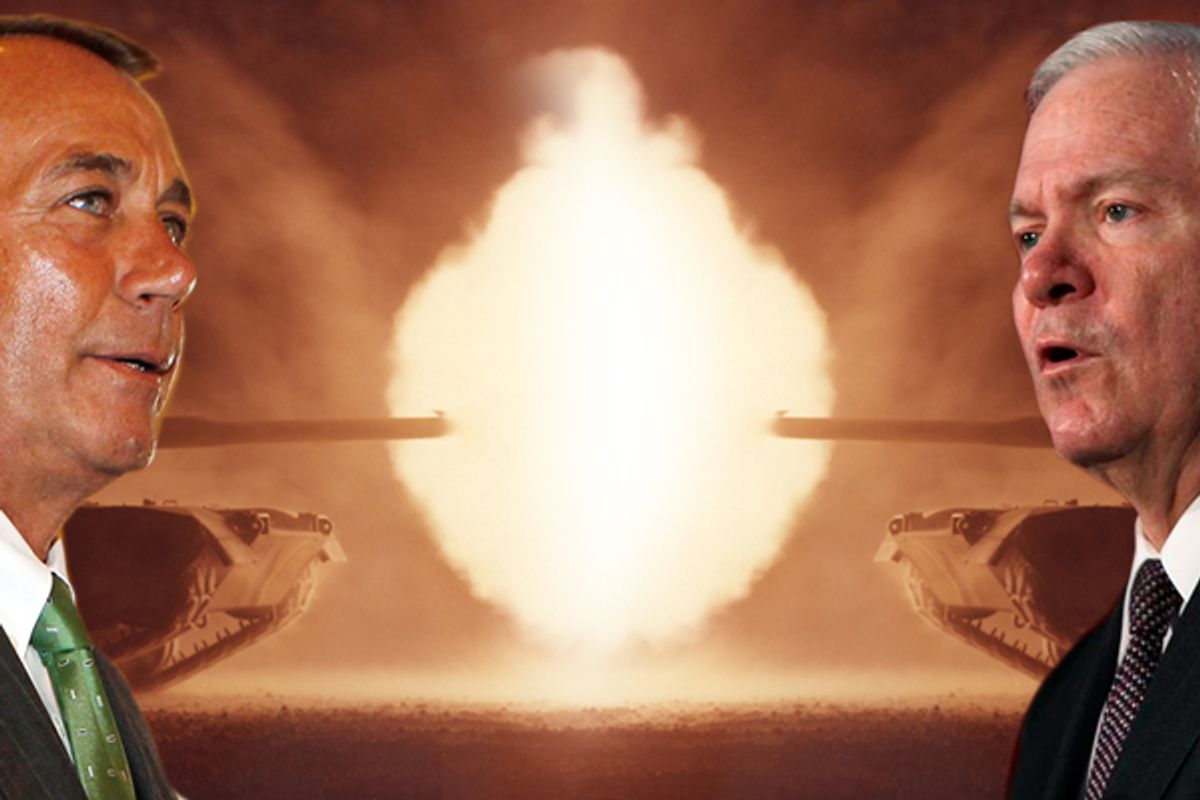 Robert Gates would like to cut about $78 billion from our bloated military budget over the next five years. That is, as they say, a start -- we spend more on defense than every other nation in the world, and in the meantime the Republican plan for dealing with our apparently crushing national debt is to threaten to default. But those Republicans who promise austerity have one small problem with Gates' plan: They refuse to cut a single dollar of military spending, even when our Republican defense secretary politely asks them to.

Of course, Gates is only attempting to forestall deeper cuts in Pentagon spending that might be proposed by ... well, no one, because no one besides hippies ever proposes serious cuts in military spending. But the $78 billion in fat to trim was offered up just in case someone else came up with a plan to cut, like, $150 billion of the Pentagon budget. This is all the most discretionary of discretionary spending, of course, because we're not even talking about the money we spend fighting wars. That spending will grow for the next couple years -- we'll be sending 1,000 new troops to Afghanistan, for example, and they will need food and guns and tanks and things. (And drones! We need lots of drones, for assassinating people.)

But uselessness and waste don't matter to our new small-government Tea Party overlords in the House of Representatives. Missouri Republican Todd Akin -- chair of the "House Armed Services seapower and expeditionary forces subcommittee" -- tried the old "while we support cuts, we can't support these cuts" argument:

"There are certainly wasteful and inefficient parts of the DOD that should be cut," said Akin. "At the same time, I find it stunning that the Obama administration thinks cutting almost $80 billion from our defense budget while we are at war is a responsible course of action. I have a number of concerns about the specifics as well as the overall priorities this action reveals. If Secretary Gates wants Congress to even consider supporting any of these proposals, he must personally ensure that Congress receives the information we need, rather than stiff-arming the Congress as has been the norm for the last few years."

Akin also argued that the fact that a cut to the Pentagon budget was even proposed proves, like everything else, that Obama is a commie who hates America:

Yes, well, the nation is also facing, according to your party, a debt crisis, and the Department of Defense is responsible for more non-entitlement spending than any other department, by a substantial margin. Just in case you didn't get his point -- Obama hates America, is French, wears a dress, etc. -- Akin proposed an interesting hypothesis: "If the president and the secretary of defense want to get rid of the Marine Corps, they should come out and say that directly."

Yes, I am 100 percent positive that Robert Gates wants to get rid of the Marine Corps. He hates the troops.

Serious Rational Conservatives often like to push their glasses up on their faces and cluck about how we can't solve the deficit problem merely by taxing billionaires. I put forth that we also can't solve the problem by not taxing anyone while also not cutting spending on anything besides $100,000 earmarks for funny-sounding animal research at the University of Peoria.

But what do I know? I'm no Buck McKeon, chairman of the House Armed Services Committee, who apparently wants to take all the money we get in military budget "savings" and spend it on ... the military.

"I'm not happy. We went into today's meeting trying to ensure the $100 billion in targeted savings were reinvested back into our national security priorities. We didn't expect to hear that before these efficiencies can be realized, the White House and OMB have demanded that the Pentagon cut an additional $78 billion from defense over the next five years."

Yes, right, we'll find $100 billion in efficiencies, and then efficiently send that money right back to Boeing.

Rep. Randy Forbes, who also now chairs an Armed Services subcommittee, had his own hysterical statement to issue. Hey, he thought, no one's mentioned the fact that we'll probably need to fight a full-on world war with China, yet! "Even more appalling, though, is the fact that the administration is not being honest with the threat we face with China or where our defense dollars are going," he said. Didn't you hear? China has airplanes, therefore we need newer, nicer airplanes.

Republicans love throwing billions of dollars at the Pentagon. They always have, they always will. It's not in any way surprising. But it will be fun, for a month or so, to watch the new government-shrinking House explain why it strongly supports various measures that substantially worsen the debt. The "I support cuts in general, but not this specific cut" argument will most likely be trotted out by Republicans for every single major government expenditure not related to helping unemployed people feed themselves.