First elected from a swing district in southern Arizona in 2006, she fended off a Tea Party challenge in 2010 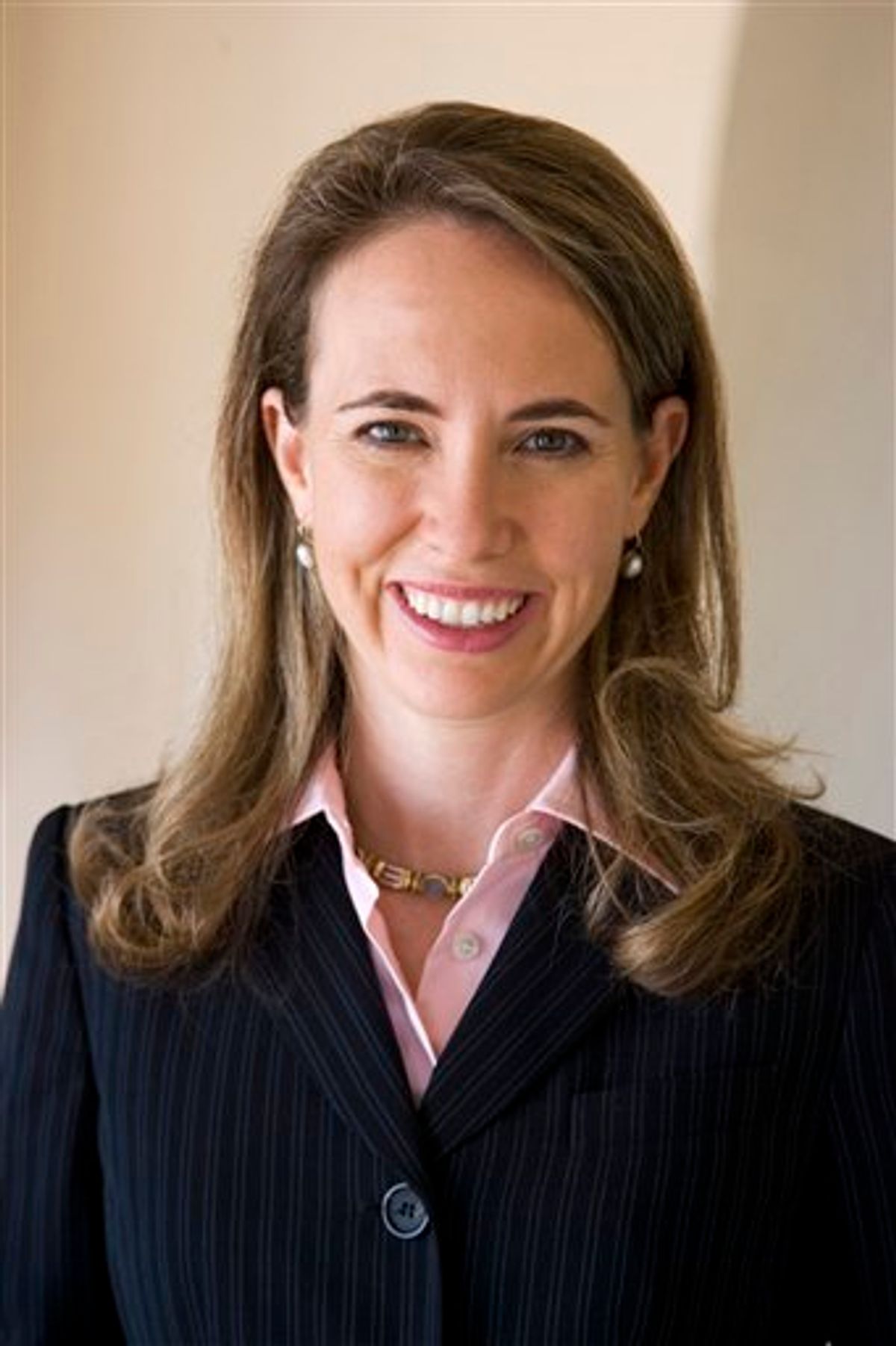 Since she launched her political career just over a decade ago, it almost seemed inevitable that Gabrielle Giffords would someday be a well-known national figure. But not under circumstances like this.

The 40-year-old Arizona congresswoman, who defied the Republican tide to win a third term last November, was shot in the head at point-blank range during an informal event with constituents outside a Safeway grocery store in Tucson. It remains unclear whether she will survive, and while a suspect is reportedly in custody, the motives for the attack are still unknown.

A native of Tucson, the home of the University of Arizona and the second largest city in the state, Giffords returned home in the mid-1990s after receiving a master's degree from Cornell, serving a Fulbright grant in Mexico, and enrolling as a fellow at the Kennedy School of Government. Back in Arizona, Giffords took charge of her family's tire company, running it for four years and overseeing its sale to Goodyear.

But business wasn't her calling; politics was. In 2000, at the age of 30, Giffords won a seat in the Arizona House of Representatives, quickly earning a promotion to the state Senate two years later. She was the youngest woman ever elected to Arizona's upper house, but she was hardly content to settle down. She enrolled in Yale's Women's Campaign School, which also produced Kirsten Gillibrand, and made it clear that she saw her future on Capitol Hill or in statewide office -- or both, maybe.

Opportunity presented itself just before Thanksgiving in 2005, when 11-term Rep. Jim Kolbe, the only openly gay Republican in Congress, announced that he wouldn't seek reelection in 2006. Kolbe's 8th District favored the GOP slightly, but in the right year, it was hardly out of reach for Democrats. Kolbe's predecessor, in fact, had been a Democrat, Jim McNulty, who was ousted by Kolbe in 1984 thanks mainly to Ronald Reagan's Republican coattails. (Back then, the district was designated as Arizona's 5th district; redistricting after the 2000 census made it the 8th.)

The timing couldn't have been better for Giffords, with George W. Bush's popularity plummeting (Katrina had been months earlier) and 2006 shaping up as a strong year for Democrats (just like 1982, when McNulty had won his seat in his first match with Kolbe, had been). Plus, there was a decent chance that local Republicans would nominate as Kolbe's successor a stridently conservative former state representative named Randy Graf, who had challenged Kolbe from the right (mainly focusing on immigration) in 2004. As he announced his retirement, Kolbe warned his fellow Republicans that they'd better come up with a different candidate for '06: "I'll be honest, I think we can do better than Randy Graf. I don't believe Randy Graf could win a general election."

Giffords, who had cultivated a centrist image in the Legislature, swung into action immediately. While her hometown of Tucson anchored the 8th District, much of the city's Latino population was contained in the neighboring district of Democratic Rep. Raul Grijalva. What remained of Tucson in the 8th was more Republican-friendly. Voters tended to be fiscally conservative but more moderate on social and cultural issues -- but not on immigration.

Giffords formally filed her candidacy papers in early December '05; by the end of the year, she'd raked in nearly $250,000 -- more than twice Graf's total, and more than enough, she and national Democratic leaders hoped, to clear the Democratic primary field. It didn't quite work, with Patty Weiss, a well-known former television anchor joining the Democratic race in early January. At the same time, the GOP establishment recruited a more moderate candidate, state Rep. Steve Huffman, into the Republicans' race against Graf.

Giffords handled Weiss' challenge by raising serious money, thanks in part to an endorsement from the women's fundraising group EMILY's List. By the summer of 2006, she had well more than $1 million in her war chest, and in the September '06 primary, she crushed Weiss by more than 20 points. And she handled the threat of a Huffman campaign with a little mischief, courtesy of the Democratic Congressional Campaign Committee's decision to air television ads that blasted Huffman over his voting record on immigration -- the top issue for Republican primary voters, according to surveys -- in the Arizona Legislature.

"When it came time to secure our borders, Steve Huffman was missing," the ad's narrator said. "If we can't trust Huffman to show up for work, how can we trust him to protect us?"

Huffman, despite enjoying strong support from Kolbe, went on to lose the primary to Graf by 6 points. (The presence of several other moderate Republicans, including a former state chairman, also boosted Graf.) The result essentially secured Giffords' election to the House. Kolbe reacted to Graf's win by saying, "[T]here are such profound and fundamental differences between his views and mine on several key issues that I would not be true to my own principles were I to endorse him now." The first post-primary poll gave Giffords a 19-point lead over Graf. Graf spent the fall hammering away at Giffords on immigration -- mainly over her support for a guest worker program -- but to no avail; she won by 12 points on Election Day.

At 36, Giffords was on her way to Congress. And the fact that she'd won -- convincingly -- in a swing district stirred immediate speculation that she was destined for statewide office, perhaps a seat in the Senate (John McCain would be running for president in 2008) or the governorship. Winning a second term in 2008 wasn't much of a challenge for Giffords, despite her district's GOP bent. The climate was still poisoned against Republicans. Running at the top of the ticket, McCain could only muster 53 percent of the vote in the 8th District in November 2008. Giffords, with her formidable war chest, didn't have to sweat much. Pitted against Tim Bee, a former Republican state legislator, she posted another double-digit victory.

Her political future seemed brighter than ever. There was immediate talk after the '08 election that McCain would decline to seek reelection to the Senate in 2010 and that Giffords would replace him. But with Barack Obama set to assume the presidency and the economy in free fall, the political climate -- nationally and especially in Arizona -- was set to change dramatically. Over the next two years, Giffords would face a profound challenge just to keep her House seat.

Her 2010 vote in favor of healthcare reform only further angered conservatives in the district. After the passage of the reform bill, she became the target of political vandals, who smashed a glass door at her Tucson office. And Giffords was among the representatives listed on a controversial target map released by Sarah Palin's PAC that featured crosshairs over the districts of pro-health reform members.

Unsurprisingly, given that the 8th is a border district, immigration also played a central role in Giffords' 2010 reelection campaign against Tea Party favorite and Palin endorsee Jesse Kelly. Giffords often blamed the federal government for failing to "secure the border," but she also opposed S.B. 1070, the harsh Arizona immigration law that has been challenged as an unconstitutional infringement on civil rights. Kelly targeted her criticism of that law in a campaign attack ad.

(There is also new attention being paid today to a Web ad for a Kelly campaign event in June promoted as "Get on Target for Victory in November/Help remove Gabrielle Giffords from office/Shoot a fully automatic M16 with Jesse Kell." It's important to note, though, that nothing is known at this point about the motive for the shooting.)

Giffords ultimately eked out a slim victory over Kelly in a race that wasn't called until three days after the election.

This morning, just a few days into her new term, a gunman shot Giffords and several other people at an event at a Tucson Safeway. While initial media reports suggested she died from a gunshot wound to the head, it appears as of 3:30 p.m. EST that she is in fact alive and in surgery at University Medical Center in Tucson. Reports suggest that at least 11 other people were shot. The gunman is reportedly a 22-year-old man named Jared Laughner.

President Obama released a statement saying that "such a senseless and terrible act of violence has no place in a free society."