Young, highly educated and ambitious, Giffords has represented the brightest future of women in American politics 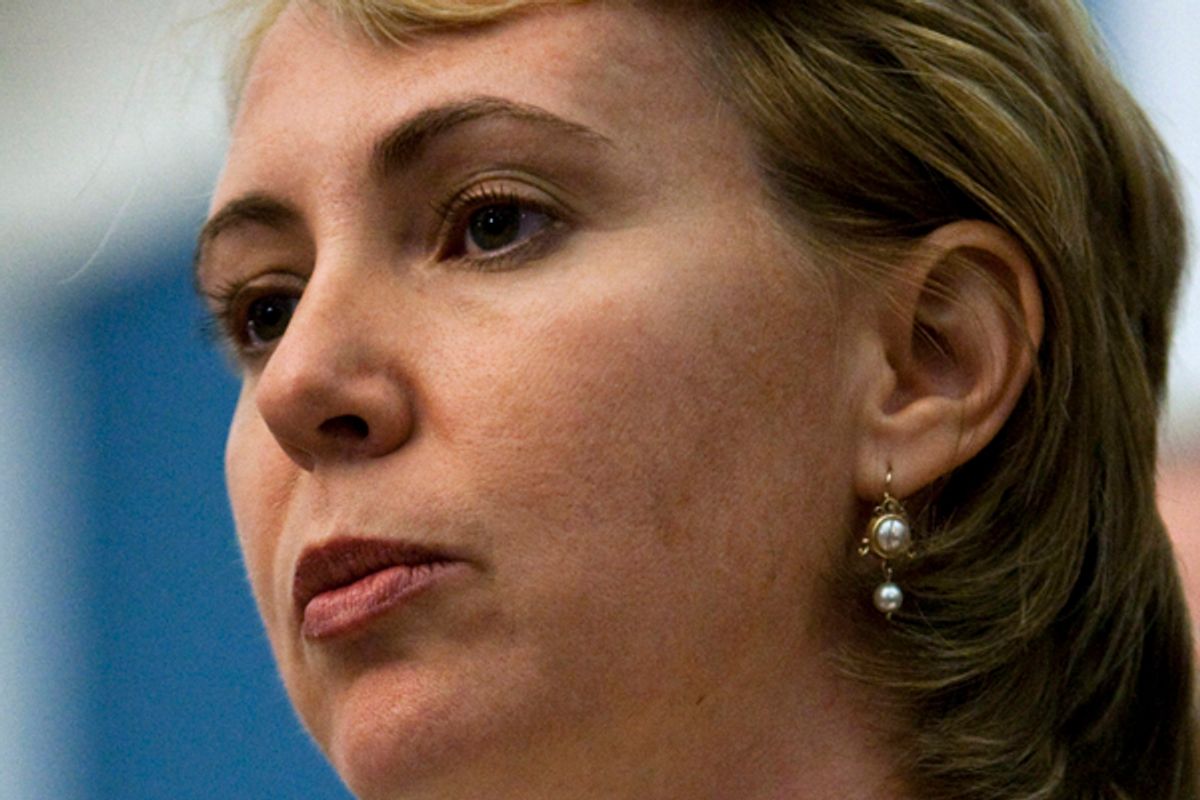 FILE - In this July 28, 2010 file photo, Rep. Gabrielle Giffords, D-Ariz., speaks during a news conference on Capitol Hill, in Washington. Republican Jesse Kelly was still basking in the glow of his victory in an Arizona congressional primary last week when the Democratic congresswoman he's trying to unseat released a scathing TV ad branding him "a risk" who would gamble away people's retirement savings. (AP Photo/Drew Angerer. File) (Drew Angerer)
--

"Who, besides Hillary Clinton and Sarah Palin, might the country look to in coming years when considering the future of women in American politics?"

That’s a question I was asked approximately 10 times a day this fall, as I traveled the country discussing my book about women and the American presidency, talking to audiences and on television and radio throughout the bitter midterms and the gales of Mama Grizzly media.

Answering the query meant that the name on my lips, all day every day it sometimes seemed, was Gabrielle Giffords'.

I am no Giffords acolyte; her blue dog politics are more centrist than my own, especially on issues of guns and border security (though she opposed Arizona's horrifying immigration law S.B. 1070). But given that most successful Democratic politicians don’t actually share my politics these days, everything else I knew about her was promising: a young, charismatic, former Fulbright scholar who had grown up racing motorcycles and married an astronaut in 2007, a Democrat who had won her Republican congressional district (Arizona’s 8th voted for George Bush in 2004 and John McCain in 2008 by 52 percent to 46 percent) by 54 percent in 2006. Giffords was so charismatic, so winning that she -- unlike many of her congressional colleagues -- had made the politically risky decision to vote with her party on electric issues like healthcare, cap and trade and the stimulus bill. Still, somehow, in a terrible year for Democrats, she was managing to hang on in a tight race.

For most of the fall, I did not think that Giffords would hold her seat, and often found myself talking regretfully about what her potential loss might mean for the House of Representatives, and for the number of women in Congress. She was tied with Republican opponent Jesse Kelly, and despite having raised an impressive amount of money on her own, had received little help from the DCCC, a fact that enraged me, especially as I saw some of her colleagues who had broken with the party on the big votes getting check after check.

It was Giffords’ district that I checked most obsessively on election night, and for the three days following, until it was finally declared that Giffords had managed to beat Kelly by the slimmest of margins. Giffords’ victory was a huge part (along with the tight victories of Barbara Boxer and Patty Murray) of what led me to feel less bad than many of my peers about the grim results of November’s election, at least when it came to the tenacity, power and futures of pro-choice Democratic women. To me, the hard-fought squeaker of a race affirmed my belief that this was a roaringly capable politician who had a powerful political future in front of her, even in the face of remarkably steep odds.

Of course, the human losses of today’s attacks in Arizona are immeasurably greater than any political or social toll. But it would be irresponsible to fail to note that a young, highly educated, ambitious Jewish woman like Gabrielle Giffords, despite her centrism, represents much that is revolutionary and hopeful about the changing face of American politics, as well as about the new and varied paths and possibilities available to women. She is the kind of politician this nation could barely have imagined existing just a decade or two ago. And so, when I have been asked about which women are not yet national stars but have the peculiar, groundbreaking alchemy it might take to someday become the nation’s first female president, again and again my answer has included the same name: Gabrielle Giffords.

As of this writing, Giffords is still alive; the doctors have just said that she is, miraculously, expected to survive. Amazing, inspiring, tough as nails. I hope with all my might to be talking about her future for many years to come.