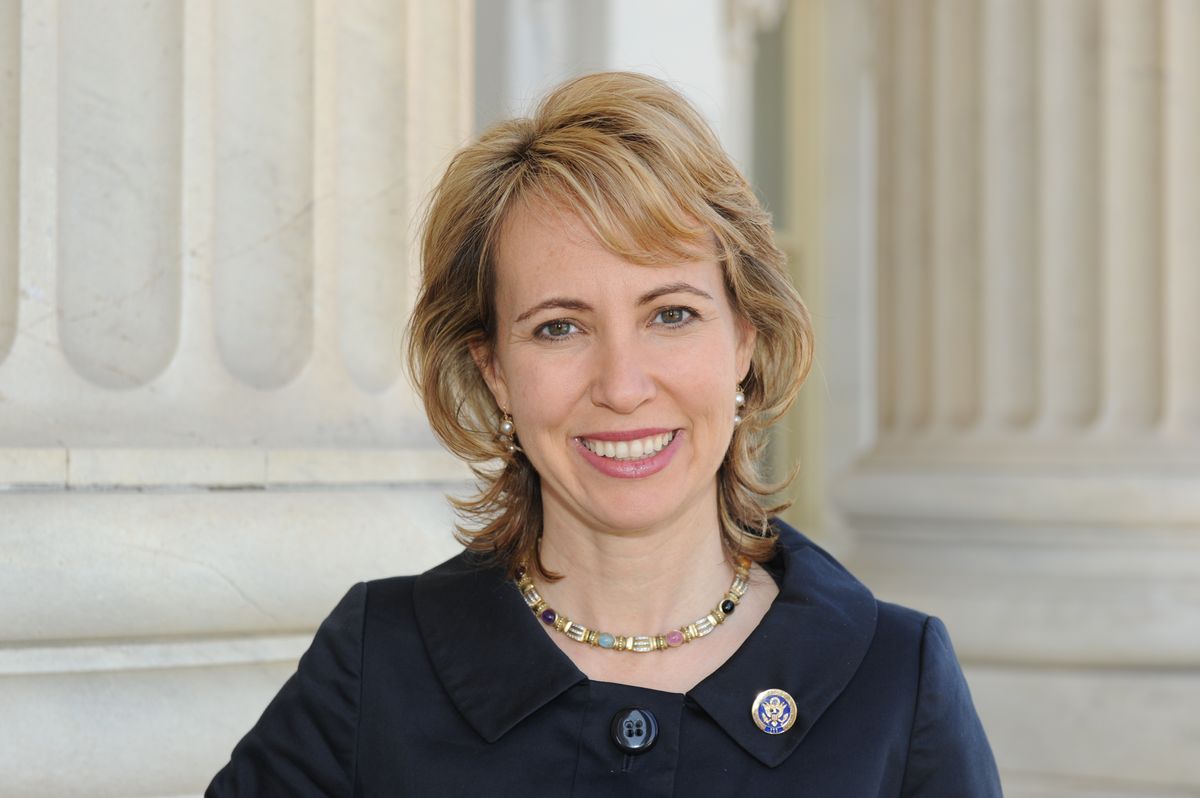 Updated EST 8:34 PM: Sheriff Dupnik ends his press conference, emotionally decrying the political "vitriol" that may have in part fueled this tragedy. His final line is, "That may be free speech, but it’s not without consequences.”

Updated EST 8:24 PM: Sheriff Dupnik says the suspected accomplice ("person of interest") is male, and possibly "in his 50's."

Updated EST 7:55 PM: Suspected shooter Jared Loughner's once obscure profile is leaking out into the open. There's this Arizona Republic picture from March of 2010 (the same month Giffords talked to MSNBC about the danger of Sarah Palin's "target ad")  that shows Loughner at a local book fair. Loughner's apparent Youtube videos focus on such wide ranging topics as currency, the Constitution, and "mind control." A Loughner MySpace profile also surfaced--though it was quickly taken down.

Updated EST 6:10 PM: A woman named Caitie Parker has also aroused much web speculation. Parker (via Twitter) claims to have known gunman Jared Loughner from high school, where she states that he was "left wing." Though her relationship to Loughner is unconfirmed as of yet, Parker's updates are gaining traction as people frantically search for information.

Updated EST 5:51 PM Web speculation is circulating in regards to political videos made by a "Jared Loughner." We do not have verification that this is the same person currently held in custody. One of the videos is titled, "My Final Thoughts."

Updated EST 5:50 PM: MSNBC reports that the death toll is up to five.

Updated EST 4:06 PM: Hospital surgeon holds a press conference, claiming that there are 10 patients, one died and five are in critical condition. He states that the deceased is a "young child," and that he is "optimistic about recovery" in regards to Giffords.

MSNBC states that deputy city manager Rich Castigar believes that, "she is expected to pull through."

From the New York Post: "The congresswoman’s father Spencer Gifford, 75, was rushing to the hospital when asked if his 40-year-old daughter had any enemies. 'Yeah,' he told The Post. 'The whole tea party.'"

Updated EST 3: 43 PM: New York Times reports a witness saying: "the gunman approached her from behind, held a gun about a foot from her head and began firing. 'He must have got off 20 rounds,' he said."

Updated EST 3:27 PM: President Obama releases a statement, ending with: "We do not yet have all the answers. What we do know is that such a senseless and terrible act of violence has no place in a free society. I ask all Americans to join me and Michelle in keeping Representative Giffords, the victims of this tragedy, and their families in our prayers."

Updated EST 3:22 PM: Washington Post reports that seven adults, one child among those hospitalized. The hospital will hold a press conference at 1:30 local time.

Rep. Gabrielle Giffords, D-Ariz., was shot in the head and an unknown number of others were wounded Saturday when an assailant sprayed bullets into an area where the lawmaker was meeting with constituents, congressional officials said.

These officials said one of the victims died soon after the attack, and others were taken to a nearby hospital.

The officials said the wounded included some of Gifford's aides who were with her at the time.

The officials who described the events did so on condition of anonymity, saying they were not permitted to comment publicly.

They said the FBI and local law enforcement were investigating the attack, which took place while Giffords was greeting constituents outside a grocery store.

Giffords, 40, was re-elected to her third term last November. She was a member of the Arizona House and Senate before coming to Washington.

She first won election to Congress amid a wave of Democratic victories in 2006. In November, she edged a tea party favorite.