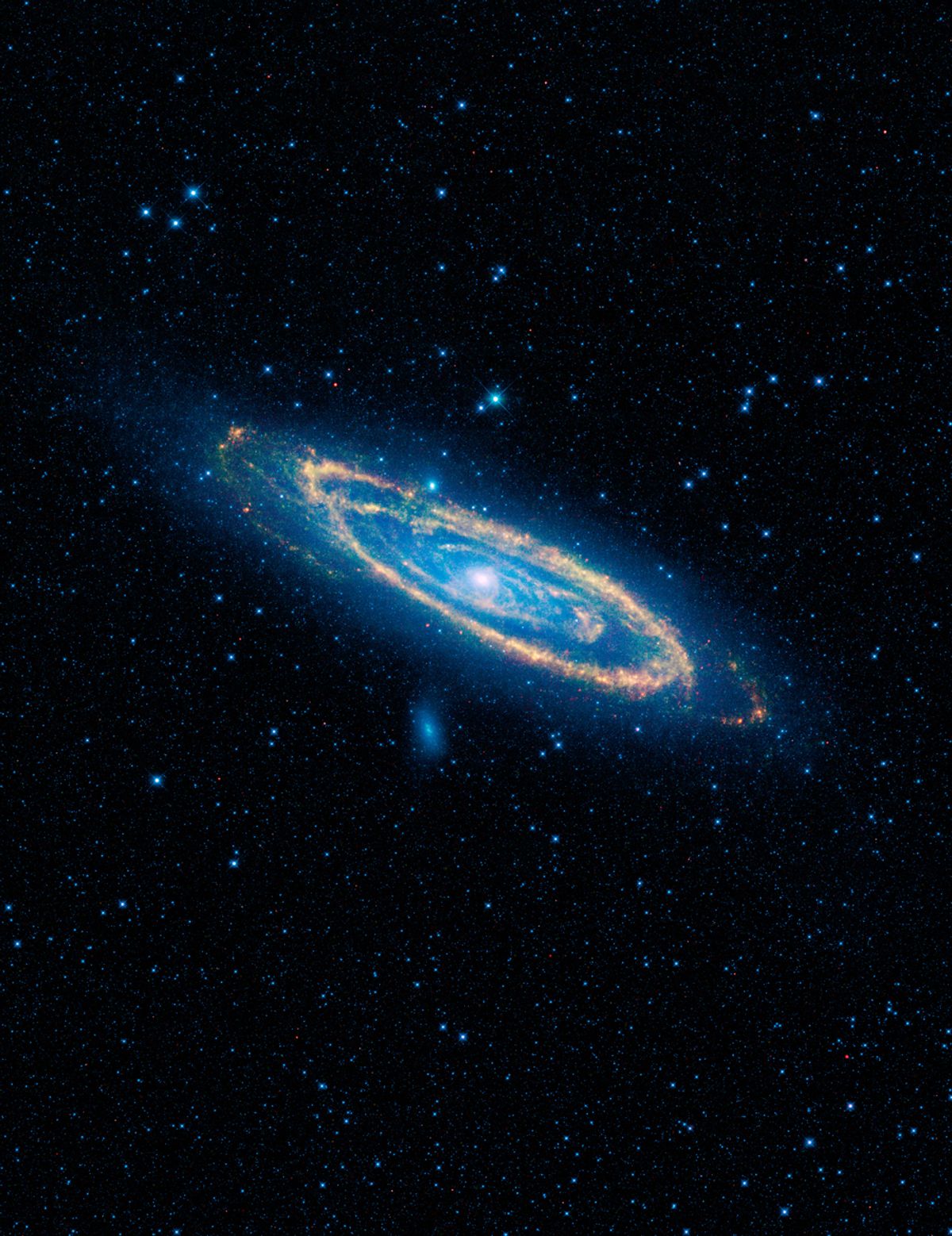 In his 1977 film "Annie Hall," Woody Allen depicted his autobiographical avatar, Alvy Singer, at age 9, in the office of a child psychologist. The kid has stopped doing his homework, his mother complains, because of something he read. "The universe is expanding," Alvy moans to the shrink. "The universe is everything, and if it's expanding, someday it will break apart and that would be the end of everything ... What's the point?" ("Brooklyn is not expanding!" his mother shrieks back.)

If he's kept up with the science section, then presumably the past four decades have been a roller coaster for poor Alvy, with astronomers and astrophysicists speculating that the universe would eventually start contracting again (it figures he could never permanently escape Brooklyn), and then deciding that it would go on expanding forever, in fact, that it's expanding faster and faster. Also, the universe is flat, at least the part of it we can see, which isn't much. As Richard Panek explains in his lively new account of 20th-century (plus a little 21st-century) cosmology, "The 4 Percent Universe: Dark Matter, Dark Energy and the Race to Discover the Rest of Reality," 85 percent of everything consists of stuff that's undetectable to the human senses and profoundly mysterious. And we're not talking about Staten Island.

"The 4 Percent Universe" is largely an account of the uneasy alliance between astronomers and particle physicists in the quest to grasp what the astronomer Alan Sandage called "the only two numbers to measure in cosmology," that is, how fast the universe is expanding right now and at what rate that expansion is changing over time -- otherwise known as the deceleration parameter. These two figures can tell you how old the universe is and when it will come to an end. But figuring out what those numbers are and above all why they are what they are has been no easy task.

Impetus from the explosion known as the Big Bang (when the universe went from being one very tiny, unimaginably dense particle to, well, everything) seemed to be what was making the universe expand. However, gravity -- the attraction between masses -- should be exerting a countervailing influence to slow down the force of the Big Bang and eventually cause the universe to suck itself back in. This changeover, however, doesn't seem to be on the menu, as astronomers discovered during the past 100 or so years, as they developed more and more sophisticated and sensitive instruments with which to make observations. (When the 20th century opened, for example, we were wondering if ours was the only galaxy. Now we've identified hundreds of thousands of others.)

Astronomers like Vera Rubin, studying the behavior of galaxies and galaxy clusters (they tend to clump up), noticed that they behaved weirdly, at least as long as you assumed that the only stuff in them was the stuff you could see. It's as if your breakfast of cinnamon toast arrived at the table looking like nothing more than a spiral of cinnamon floating over the plate. The bread holding it in formation might not be visible, but from the configuration of that cinnamon, you could deduce it was there.

The existence of invisible "dark matter" was first inferred by the Swiss astronomer Fritz Zwicky in the 1930s, but inferring is not the same as demonstrating, and the quest to actually measure a particle of dark matter is ongoing. ("The 4 Percent Universe" follows the story right up to the present day.) Much of Panek's book is taken up with describing the pitched rivalry between two teams working on methods to determine Sandage's famous numbers. One, working out of the Lawrence Berkeley National Laboratory and headed by Saul Perlmutter, was oriented more toward physics, while the other, more astronomically minded team was a looser coalition of scientists who chose the Australian Brian Schmidt as their leader.

According to Panek, physicists and astronomers have pretty different working styles, and it's hard not to root for Schmidt's team (the High-Z SN Search program), as it bucks the hierarchical customs by which "big gun" senior scientists take credit for the work done by junior team members. Nevertheless, if Perlmutter's team, the Supernova Cosmology Project (SCP), was less democratic, it still got important results. Both groups independently arrived at the conclusion that the expansion of the universe is accelerating (further evidence for the existence of both dark matter and dark energy), and the race was neck and neck all the way. (Essentially, it was a tie, but you wouldn't want to say so to a member of either team in a bar.)

They did this by observing supernovae, high-energy stellar explosions that, unlike most other cosmic events, take place over a period of time short enough that mere human beings can watch them unfold. Over the course of the century, astronomers have developed more and more exquisite ways to spot and analyze supernovae in order to determine how far away they are (that is, were -- since what we're really seeing is the light produced by events that happened billions of years ago) and how fast they're moving.

These efforts have been complicated by the discovery that there are several kinds of supernovae, and by the meddling of factors like cosmic dust. For example, the redness of the light emitted by a supernova can tell you how fast it's moving away from you (this is a distortion of light waves like the Doppler effect that you hear in sound waves as a siren drives past), but it could look redder than it really is if there's red dust between the telescope and the supernova.

The backbone narrative of "The 4 Percent Universe" is the story of how High-Z and SCP arrived at their discovery, with the astronomers talking trash about the physicists (and vice versa), duels over who gets time on the Hubble Space Telescope and more than a few dust-ups in the scientific press. The book is as much about how the science got done as about the science itself, and sometimes the false leads and wild goose chases can be confusing to the astronomical novice. Nevertheless, Panek, who has written early accounts of these matters for the New York Times, is a wondrously clear explicator of some thorny concepts, and by the end even cosmological dilettantes will chuckle knowingly upon learning of an e-mail Schmidt sent to one of his team in 1998, that read, "Well Hello Lambda!"

So yes, Alvy, the universe is still expanding, even Brooklyn, and it may indeed break apart someday. But until then, there is still the thrilling mystery of dark matter and dark energy to plumb, so in the meantime, for God's sake: Do your homework.

Books Our Picks Physics Science Science Books What To Read