Swearing off the rhetoric of violence 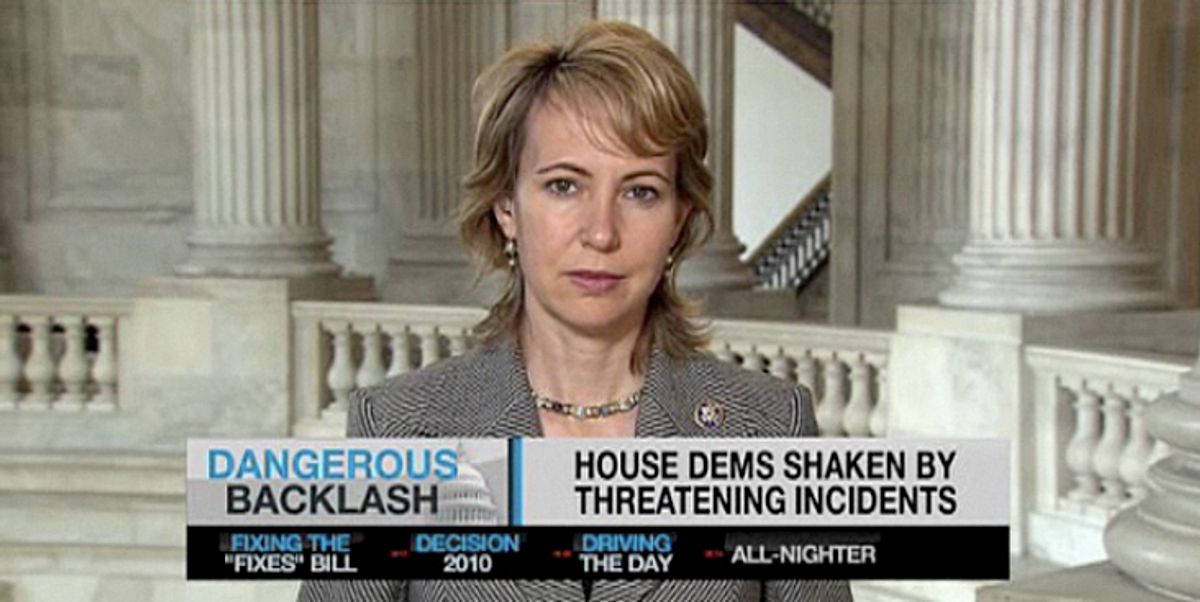 We won't know for a while exactly why the gunman identified as Jared Lee Loughner, 22, shot 18 people, including Arizona Rep. Gabrielle Giffords, and we may never know why. From the shards of maybe-evidence he left behind – to my knowledge it's unconfirmed whether any of the MySpace, YouTube or Facebook posts being cited were created by the suspect – people can find reason to call him a right-wing nut-job or a left-wing fanatic. He supposedly railed against the government like Tea Partiers do, he was a gold-fanatic like Glenn Beck, but he also listed the Communist Manifesto as a favorite book on his alleged MySpace page.

But while we wait to learn the motivation behind Saturday's shooting, which killed six, including federal Judge John Roll, nine-year old Christine Taylor Green and Gabe Zimmerman, Giffords' community outreach director, is it really controversial to suggest that the overheated anti-government rhetoric of the last two years, with its often violent imagery, ought to be toned down? Really?

Sadly, to my knowledge, no conservative leader has yet called for dialing back the rage on the right in the wake of the Giffords shooting. Sarah Palin sent condolences to Giffords' family, but said nothing about her unconscionable SarahPAC map putting 20 House members, including Giffords, in actual crosshairs for supporting healthcare reform, or her infamous Tweet telling conservatives "don't retreat, reload." Giffords' 2010 Tea Party challenger, Jesse Kelly, hasn't apologized for inviting supporters to "shoot a fully automatic M16" to "get on target for victory" and "remove Gabrielle Giffords from office." Nevada GOP Senate candidate Sharron Angle hasn't yet recanted her statement about the need to pursue "Second Amendment remedies" if political change lags behind the Tea Party's dreams.

Although there's no evidence Tea Party rhetoric had anything to do with Giffords' shooting, it can be no surprise that her father, when asked if his daughter had enemies, told the New York Post tearfully, "Yeah, the whole Tea Party."

Maybe in the days to come conservatives will listen to Pima County Sheriff Clarence Dupnik, who denounced "the vitriol that comes out of certain mouths about the government" at a Saturday night press conference. The 50-year law enforcement veteran, who courageously bucked his state's anti-immigrant racial profiling law last year, declared that "the bigotry that goes on in this country is outrageous, and unfortunately…Arizona has become the mecca for prejudice and bigotry." Dupnik noted that Giffords had a meeting disrupted in 2009 when "someone dropped a weapon out of their pants," that a door was shattered at her headquarters after she voted for healthcare reform last March, and also revealed that "a suspicious package" had been delivered to her Tuscon office and is still being investigated.

There's no evidence tying Loughner to any of the right-wing rhetoric used against Giffords, but it would be crazy not to notice that such rhetoric has already claimed victims, and will almost certainly continue to. I'll never apologize for suggesting that Bill O'Reilly's crusade against Dr. George Tiller – and his dozens of segments labeling him "Tiller the Babykiller" – might have created the context in which Tiller was murdered in May 2009. It shocked me watching cable news all day Saturday that almost no one talked about anti-tax nut Joe Stack flying his plane into an Austin IRS building as the Tea Party's anti-tax crusade took off, or Glenn Beck fan Byron Williams driving into San Francisco locked and loaded to shoot up the obscure left-wing Tides Foundation, which Beck had repeatedly railed against on Fox.

Rebecca Traister wrote a moving tribute to Giffords today, noting that the Blue Dog Democrat was to her right politically (and to mine as well) but that her vote for healthcare reform, in a conservative district, took real courage. That courage was on display Saturday, while Giffords was fighting for her life in a Tuscon hospital, as MSNBC repeatedly replayed an interview with Giffords last March, discussing the attacks on her office as well as Sarah Palin's "crosshairs" ad. If you haven't seen it, you should. It is devastating. Chuck Todd and Savannah Guthrie go out of their way to defend Palin and the GOP from any attempt to link their rhetoric with the attacks on Giffords and other Democrats, "In fairness, campaign rhetoric and war rhetoric has been interchangeable for years," Todd insisted, and Giffords graciously acknowledged "extremes on both sides, frankly, not just on the Republican side."

But she delivered a poignant patriotic defense of American democracy, which is "a beacon to the world," she told Todd, "because we effect change at the ballot box, not because of these outbursts of violence." She had the courage to name Palin: "We're on Sarah Palin's targeted list, but the thing is that the way that she has it depicted has the crosshairs of a gun sight over our district, and when people do that, they've gotta realize there are consequences to that action."

We have no idea why Loughner allegedly tried to kill Giffords Saturday. But the fact that a well-liked, centrist, pro-gun rights Democrat like Giffords faced threats and attacks for her healthcare vote, or that she was targeted with violent imagery by the 2008 Republican nominee for vice president as well as her 2010 GOP opponent, ought to make conservatives pause. More than pause, it ought to make them denounce those in their ranks who are using extremist, eliminationist rhetoric. Let's hope it does in the days to come. In the meantime, our prayers and good wishes are with Gabrielle Giffords and her family and all the other victims of Saturday's cruelty.