In the wake of the Giffords shooting, politicians look to addressing acrimonious political climate 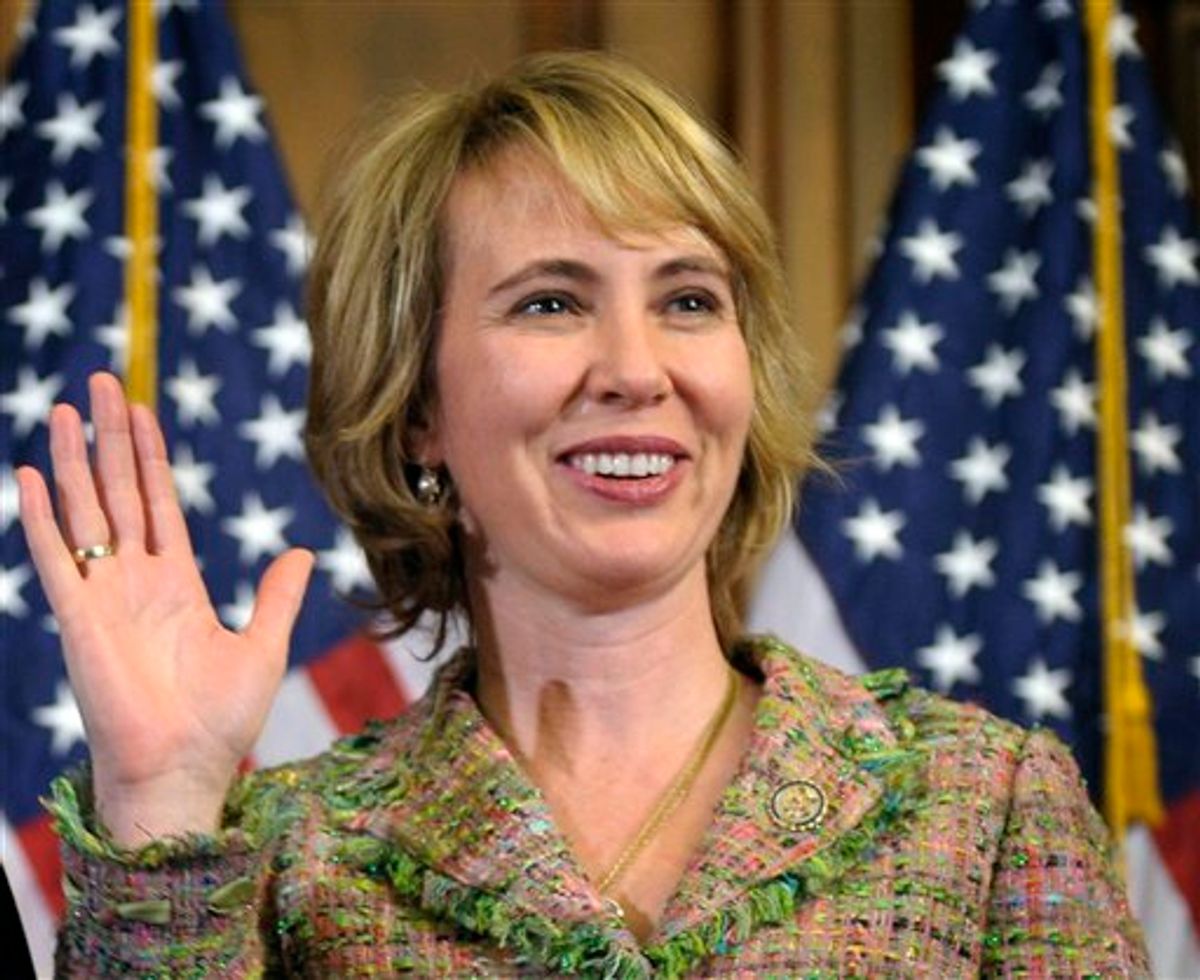 In this photo taken Wednesday, Jan. 5, 2011, Rep. Gabrielle Giffords, D-Ariz., takes part in a reenactment of her swearing-in, on Capitol Hill in Washington. Rep. Gabrielle Giffords of Arizona was shot in the head Saturday, Jan. 8, 2011 when an assailant opened fire outside a grocery store during a meeting with constituents, killing at least five people and wounding several others in a rampage that rattled the nation. (AP Photo/Susan Walsh) (AP)
--

The nation's caustic political climate has become a suspect of sorts in the rampage that left six dead and a lawmaker critically injured in Arizona. Already, appeals are being heard to tone down the rhetoric.

The captured suspect's motives remain unknown despite his online diatribes betraying resentment of the government and a scattered state of mind. Still, scrutiny is intensifying on how much is too much, and how hot is too hot, in political debate.

The attack on Democratic Rep. Gabrielle Giffords and those who were with her might be the work of "a single nut," said Democratic Rep. Raul Grijalva, whose Arizona district shares Tucson with Giffords' district. But he said the nation must assess the fallout of "an atmosphere where the political discourse is about hate, anger and bitterness."

In Washington, lawmakers from both parties were deeply shaken and the House's newly installed Republican leaders postponed Wednesday's scheduled vote to repeal the new health care law. That divisive issue was at the center of the harshest criticisms of Giffords and many other Democrats for the past two years.

The chief law enforcement official in the House, Sergeant-at-Arms Bill Livingood, said the Tucson attack did not appear to be part of a larger threat against Congress. Still, as a precaution, he advised each House member's office in an e-mail Saturday evening to get in touch with local law enforcement.

Washington and the nation have experienced a year or more of raw politics, with anger spilling over on both sides and gun-related metaphors coming loosely from the lips of some candidates and activists. Giffords, who had been a figurative target of the right, warned months ago that the verbal assaults were beyond the pale and could have dire results.

In Pima County, Ariz., Sheriff Clarence Dupnik suggested "all this vitriol" in recent discourse might be connected to Saturday's shootings. "This may be free speech," he told reporters, "but it's not without consequences."

Jonathan Cowan, president of the centrist Democratic group Third Way, said: "We do know that politics has become too personal, too nasty and perhaps too dangerous. Perhaps out of this senseless act some sense can return to our public discourse."

Many lawmakers, especially Democrats, felt the 2009-2010 debate over health care sometimes got out of hand. It began with emotional town hall meetings in the summer of 2009, when some critics warned of government "death panels."

Giffords, 40, was among lawmakers who reported 42 threats or acts or vandalism in the first three months of 2010, a big increase over the previous year, law enforcement officers said. Nearly all the threats dealt with the massive health care bill that Giffords and other Democrats enacted over fierce Republican opposition.

In March, someone kicked in or shot out a glass door and side window at Giffords' office in Tucson, a few hours after the House passed the health care measure with her help.

Giffords also was among about 20 Democrats opposed in last fall's elections by Sarah Palin, the 2008 GOP vice presidential nominee. Palin's Facebook page in March posted a U.S. map with the cross-hairs of a gun scope imposed over each of the 20 Democrats' districts. Gun imagery appeared in various ways in the campaign, often not connected at all with gun rights.

"We're on Sarah Palin's targeted list," Giffords said at the time. "The way that she has it depicted has the crosshairs of a gun sight over our district. When people do that, they've got to realize there are consequences to that action."

Palin's Facebook page after the shooting extended condolences to Giffords' family and the other victims.

The suspected shooter, Jared Loughner, complained about the government online and spoke of matters involving currency, terrorism and "mind control." But what might have driven him to violence has not been established.

"We don't yet know what provoked this unspeakable act," President Barack Obama said from the White House. "We are going to get to the bottom of this."

He said he's dispatched the head of the FBI to Arizona to oversee the investigation.