Liberals and conservatives claim the alleged killer's reading reveals his true ideology. They're both wrong 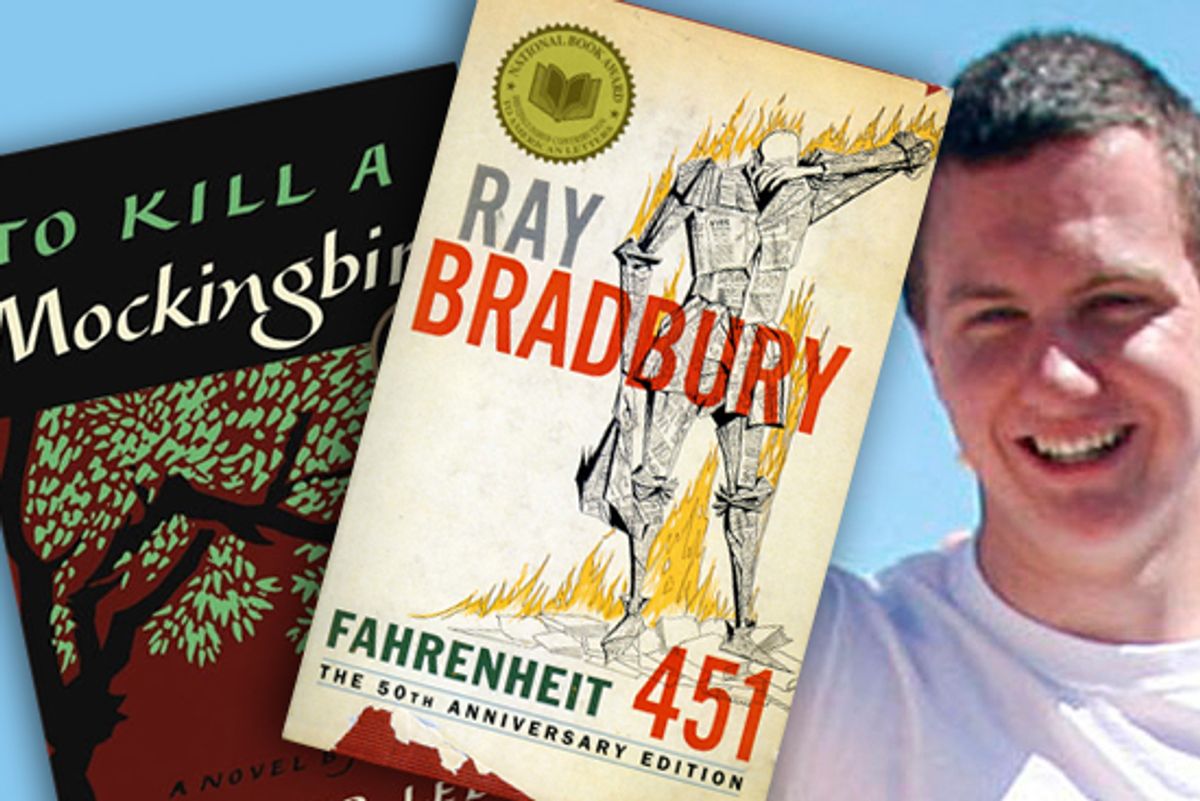 No sooner had the media discovered the YouTube profile page for Jared Lee Loughner -- charged with killing six people, including federal Judge John M. Roll and a 9-year-old girl, and wounding 13 others, including Rep. Gabrielle Giffords, D-Ariz., in a shooting in Tucson Saturday -- than speculation began about the favorite books Loughner listed there. Conservatives pointed to Loughner's citation of "The Communist Manifesto" as proof that he was a leftist maniac and liberals interpreted his enthusiasm for Ayn Rand's "We, the Living" as evidence that he was a right-winger.

Other books on Loughner's list (the profile was created on Dec. 20) include the children's classics "Alice's Adventures in Wonderland," "Peter Pan" and "The Phantom Tollbooth." He also claimed to have admired Adolf Hitler's "Mein Kampf." But the idea that this list will tell us much about Loughner and any political motives he had for shooting those 19 people is sorely misguided. Anyone who takes the time to watch the 22-year-old college student's videos ought to be able to see that clearly enough.

As the New York Times remarked on Sunday, the garbled, rambling and generally incomprehensible statements included in the videos (which consist of text only) are "consistent with the delusions produced by a psychotic illness like schizophrenia, which develops most often in the teens or 20s." Loughner's book list is also consistent with a bright, curious, rebellious teenager whose life has been arrested and derailed by just such an illness. In fact, the only surprising thing about that list is that it doesn't include "The Catcher in the Rye," a novel important to two other mentally ill shooters: Mark David Chapman (who killed John Lennon) and John Hinckley, who tried to assassinate Ronald Reagan.

The sole ideological thread running through Loughner's list is an inchoate anti-authoritarianism. It's likely that what attracted him to "Mein Kampf" and "The Communist Manifesto" was less the political thinking in either book than their aura of the forbidden, the sensation that he was defying the adults around him by daring to read either one. The rest of his favorites -- "One Flew Over the Cuckoo's Nest," "Brave New World," "Animal Farm" and "Fahrenheit 451" -- depict deceitful and oppressive regimes committed to squelching individual initiative and thought.

It's not hard to understand why Loughner might be drawn to such narratives. A young man whose slide into paranoid schizophrenia has been noticed and addressed (Loughner was suspended from Pima Community College and administrators insisted that he get a mental health evaluation before he would be allowed to return) probably would favor literature in which maverick truth-tellers are labeled as insane or criminal by self-serving authority figures.

By including Plato's "Republic" and "Meno" on his list of favorites, Loughner could imply, as many paranoids do, that by virtue of his superior intellect he was privy to hidden knowledge of how the world really works. Casting the delusional notions in his videos in the form of logical syllogisms ("If A.D.E. is endless in year, then the years in A.D.E don't cease. A.D.E is endless in year. Therefore the years in A.D.E. don't cease.") was surely also meant to insist that they were the product of rational thought, not insanity.

But Loughner is almost certainly insane and, like the countless other mentally disturbed people who send similar ravings to media outlets around the world, his ideas would have been ignored as incoherent and irrelevant if he hadn't fired a gun into a crowd of people Saturday. The fact that he did fire that gun, however, doesn't make his delusions suddenly meaningful. It doesn't make his list of favorite books significant. Crazy people who make headlines and change history are still crazy.

By studying Loughner's book list for clues to the political leanings that somehow "drove" him to commit murder, commentators are behaving a lot like crazy people themselves. Paranoids are prone to scouring newspaper articles and the monologues of late-night comedians for imaginary coded messages that confirm their "secret knowledge" about the world. But those coded messages aren't there -- it's just random stuff with no special significance. The truth about mental illness is that it strikes without regard to political affiliation or ideological orientation, and it turns beautiful minds into nonsense factories. We can debate a social order that allows its victims access to firearms and talk about finding better ways to intervene before the minority of mentally disturbed individuals with violent impulses are able to act on those impulses. But trying to find the cause for this disease in politics, ideas or books is just plain nuts.