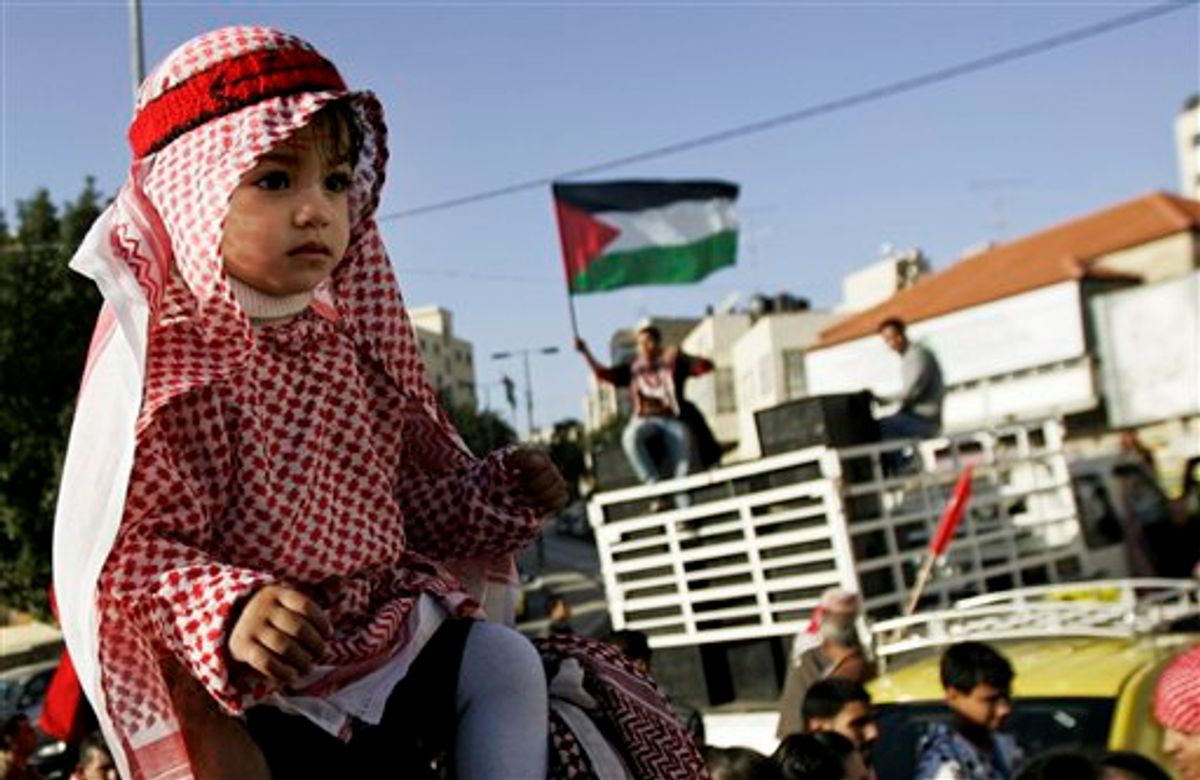 A Palestinian girl sits atop her father's shoulders as a Palestinian flag waves in the background during a march marking the 43rd anniversary of the leftist Popular Front for the Liberation of Palestine (PFLP) in the West Bank city of Ramallah, Saturday, Dec 18, 2010. (AP Photo/Majdi Mohammed) (AP)
--

The Palestinian foreign minister says he will seek United Nations recognition for a Palestinian state in September and is currently lobbying for votes worldwide.

The move is part of the Palestinians' so-called Plan B of pursuing an alternative to a negotiated peace deal while talks with Israel remain stalled. Riad Malki's announcement Sunday followed Chile's recognition of Palestine, making it the fifth South American country to do so recently.

While a majority for Palestine in the General Assembly seems possible, recognition by the Security Council -- whose decisions are legally binding -- would likely face an American veto.

The September target date has the month shaping up to be a crucial one for the Palestinians. It also marks the time frame for President Barack Obama's goal of reaching a peace deal and Palestinian Prime Minister Salam Fayyad's hope of having the foundations of the future state ready.

Fayyad has acknowledged that the recognition drive at the U.N. will not necessarily bring realization of a state. But it helps the Palestinians enshrine their demand that the 1967 borders serve as the basis for drawing their nation's shape. The Palestinians want their state in the lands Israel captured in the Mideast war that year -- the West Bank, Gaza and east Jerusalem.

"Such recognition would create political and legal pressure on Israel to withdraw its forces from the land of another state that is recognized within the '67 borders by the international organization," Malki, the foreign minister, told reporters in Ramallah.

He said the Palestinian Authority is working to attain as much recognition as possible for a state by September, when it will call for a U.N. vote. It will initially seek Security Council recognition but, failing that, will turn to the General Assembly, where the decisions are not binding but there is no veto.

The Palestinians have made South America a priority. Brazil, Argentina, Bolivia and Ecuador recognized Palestinian statehood last month, and Uruguay, Paraguay and Peru are expected to join Chile on that list in the coming weeks.

Malki said Asia, Africa and the Caribbean were next in line.

"In the Caribbean there are 12 small states ... but these countries have the same vote that China has in the U.N. General Assembly," he said.

About 100 other countries have recognized statehood -- most of them developing nations -- after the Palestinians declared "independence" in 1988, and a few others, mostly former Soviet republics, did so after the 1993 Oslo peace accords. In the mid- and late-2000s, Venezuela and Costa Rica followed suit.

Malki said the Palestinians have been talking to Honduras, Guatemala and El Salvador as well, and that Spain has promised to recognize Palestine in September.

Spain would be the first western European country to do so. Former Communist countries in eastern Europe, including Hungary, Bulgaria and Romania, were among those who recognized Palestine in 1988.

The Palestinians appear to have a majority in the General Assembly, but are unlikely to get the go-ahead in the Security Council.

Israeli officials have called the recognition declarations meaningless and counterproductive to the peace process. Israeli Prime Minister Benjamin Netanyahu opposes withdrawal to the pre-1967 lines, though he says he remains committed to negotiating a partition of the land.