Watering the tree of liberty 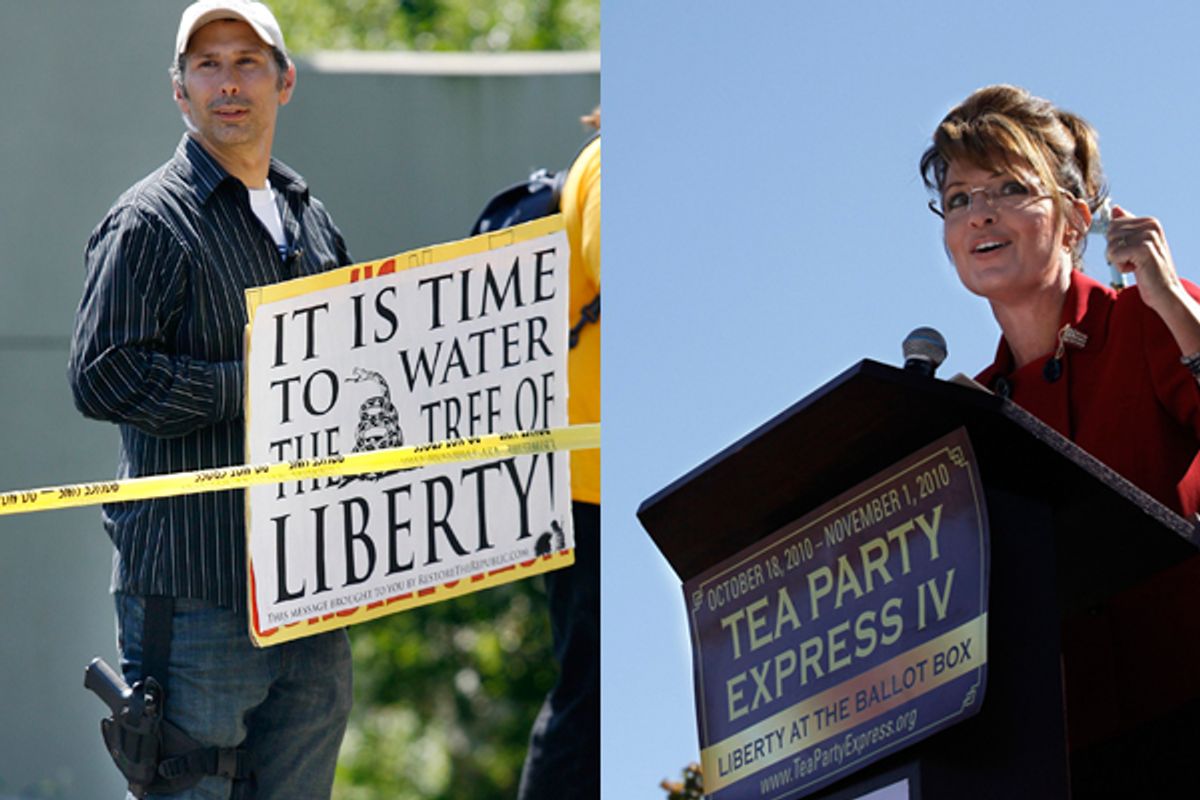 Whether Jared Loughner is a far-left nihilist or a right-wing racist or -- as he most likely is -- some weird politically incoherent amalgamation of extremist beliefs tinged with paranoia, he wasn't driven to murder by angry campaign slogans. Steve Kornacki's right -- Loughner was not a Gadsden Flag-wielding Tea Partyer incited to violence by the Twitter messages of Sarah Palin. But he is a product of the culture, and there's a reason he chose to attack a Democratic congresswoman. There's a reason why his paranoia was directed at an elected official, the closest representative of what he saw as in illegitimate government. The attempted assassination of a member of Congress seems depressingly like the inevitable conclusion of two years of hysterical revolutionary language suffusing every single domestic political debate.

The Tea Parties are based around the rhetoric of the American Revolution, which was a violent insurrection. It makes a sad sort of sense that a bunch of comfortable white reactionaries would dress up their childish tantrums with such grandiose language, because "desperately protecting your privilege in the face of what appears to be the demise of the empire" sounds much less inspiring than "defeating tyranny."

As the Republican Party has become more homogeneous, more regional and more reactionary, it has tended to make up for its growing demographic shortcomings by making sure its supporters are more motivated and energized -- and the most effective way to energize them has been to make sure they're constantly enraged.

When the GOP didn't have the votes to stop healthcare reform from passing, their strategy -- and it almost worked -- was to scare Democratic elected officials. That was the point of telling everyone to shout themselves hoarse at the town halls: to terrify House members. Convince them that their constituents were incensed. If some LaRouchites or other unclassifiable political entities got into the mix, fine -- more voices for the choir of rage. What was formerly a sort of uneasy tolerance of the extremists inched closer to open acceptance. Roger Ailes allows Glenn Beck to run amok spreading classic Bircher paranoia. Matt Drudge links to conspiracy-mad broadcaster Alex Jones. Everyone in the party had to pretend to be cool with idiot extremist Oath Keeper Sharron Angle, because the craziness the right wing whipped up led its primary voters to select her over the safe party hack who would've handily defeated Harry Reid. There are connections -- both direct and spiritual -- between the far-right Patriot movements that flourished in the '90s and some of the more out there elements of the Tea Parties.

When she's not talking about God, Sarah Palin's talking about guns. Practically all her rhetoric is blood-soaked, and proficiency with firearms is a key element of her persona. Her cult can claim her stupid map wasn't supposed to show rifle sights aimed at vulnerable Democratic districts, but anyone who's ever seen a violent movie -- which is to say, Americans of all ages -- knows what cross hairs look like. "Don't Retreat, Instead - RELOAD" isn't one unfortunate incident of over-the-top language, it's her mantra. "Going Rogue" begins with that line, attributed to her father.

Everyone uses battle-related language in politics, of course. "If they bring a knife to the fight, we bring a gun," candidate Barack Obama said in 2008. Rahm Emanuel's comically exaggerated speech is the stuff of (probably embellished) legend. It's perfectly legitimate, if also often counterproductive and stupid, to pretend politics is blood sport.

I'd also say that while you can argue the wisdom of either, there's a difference between using the imagery of politics as street fight and employing revolutionary rhetoric. And when you combine standard-issue violent political language with the idea -- stated and reiterated by nearly every prominent right-wing politician and media figure since Obama took office -- that the opponent is not simply wrong, but has illegitimately seized power, and is illegally exercising that power, the inevitable question raised is, "What do we do to stop them?" The correct answer is supposed to be "vote Republican and keep watching Fox," of course, but a good midterm for the GOP hasn't dethroned the socialist usurper-in-chief.

It's not strictly that language tinged with violent imagery is dangerous, or that heated denunciations of the motivations of your political opponents are out of line, or even that America's pervasive gun fetishization is to blame (though our gun culture is insane and bizarre to every single other developed nation in the world) for violent crimes. But when elites don't just condone but participate in the combination of that violent imagery with the idea that the government represents an existential threat -- that representatives of the government are domestic enemies, that your liberty and even your physical safety are in danger -- the idea of political violence is normalized. Terrorizing Congress members at town halls and "we surround you" and head-stomping and death threats and all the other bad craziness just becomes "the way we do politics in America."

The crazies are listening to the same media that the rest of us are. Charles Alan Wilson, the man arrested last year for threatening the life of Sen. Patty Murray, used the same language as Glenn Beck in his insane voice mails to Murray's office and borrowed Sarah Palin's death panels meme. (He also had a concealed weapons permit and carried a loaded .38 special.) When everyone's hoisting guns and shouting "tyranny" and playing at being a revolutionary, there will be a couple of people who don't see the wink.

Was Erick Erickson on CNN this weekend, to deliver his brilliant political analysis? I imagine he would prefer not to be reminded of the time he got himself all worked up about new regulations on dishwasher detergent, and wrote this stirring call to arms:

At some point soon, it will happen. It’ll be over an innocuous issue. But the rage is building. It’s not a partisan issue. There is bipartisan angst at out of control government made worse by dumb bans like this and unintended consequences like AIG’s bonus problems.

If the GOP plays its cards right, it will have a winning issue in 2010. But it is going to have to get back to "leave me the hell alone" style federalism where the national government recedes and the people themselves will have to fight to take their states back from special interests out of touch with body politic as a whole.

Were I in Washington State, I’d be cleaning my gun right about now waiting to protect my property from the coming riots or the government apparatchiks coming to enforce nonsensical legislation.

This, again, was in response to a mildly inconvenient ban on certain types of dishwasher detergent that are polluting fresh groundwater.

Will Joyce Kaufman be on WFTL tomorrow morning repeating her comments about what to do when voting doesn't produce the desired result?

There's Dick Morris on Fox just throwing this out there: Maybe "those crazies in Montana who say, 'we're gonna kill ATF agents because the U.N.'s going to take over'" are "beginning to have a case."

There's also Michele Bachmann more explicitly calling for a revolution, invoking Jefferson's famous "tree of liberty" line. (That appearance, on Hannity, was as insane as Bachmann ever gets, babbling about a world currency, warning that the "link" of "our very freedom" was about to "break.")

Even the goofiest of the sideshow midterm primary candidates presented themselves almost uniformly as not just the spiritual descendants of the Founders, but the would-be leaders of a new revolution. Alabama's Rick Barber is just sitting at a bar, chatting with Washington about how the IRS is the modern-day equivalent of George III:

Democrat Joe Manchin didn't feel he could win his Senate race unless he filmed himself literally shooting liberal ideals to death, with a gun:

Sharron Angle implicitly called for violence if Republicans couldn't win traditional elections. Some idiot from Glenn Beck's show says violent overthrow of the government is "on the table." Beck himself constantly presents the specter of vast cataclysmic violence as inevitable -- just around the corner, unless we turn back from liberalism soon.

This stuff infects the whole culture. When this is the bed you make, you can't be too shocked when monsters hide under it.