In which Sarah slams her talking points once more, this time on a literal gold dig 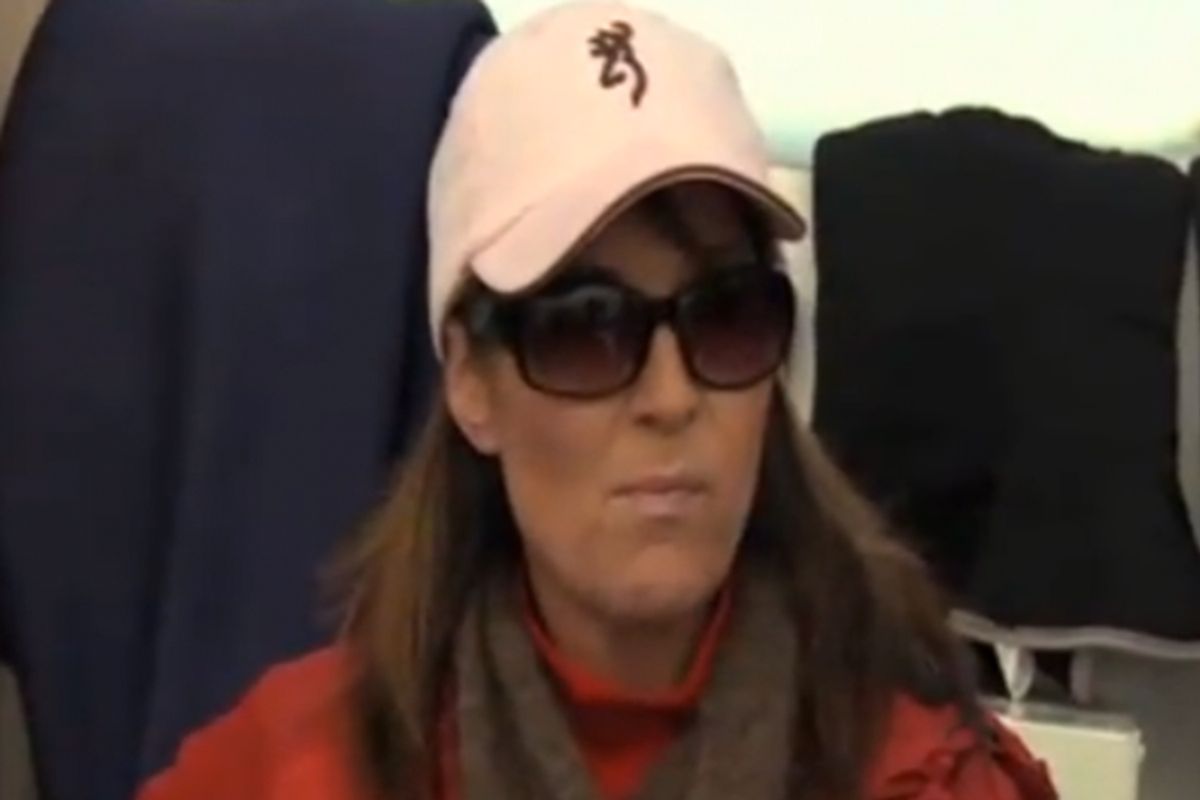 Sarah Palin in the season finale of "Sarah Palin's Alaska"
--

This week's episode served as the final episode in the 8-part marketing presentation that brilliantly defined Sarah Palin as a political brand while simultaneously putting the nail in the coffin of her presidential ambitions. It seemed like a good idea I suppose -- using the ruse of an Alaskan documentary to produce a long-form political ad -- but even her most hardcore fans must have had a hard time buying the Mama Grizzly crap that she was selling. And she never stopped selling it to the bitter end.

For people like me, and probably for the majority of those of us who have witnessed Sarah Palin's rise to prominence, her allure as a personality is both mysterious and depressingly obvious. In an age where solid branding is the only way public figures can attract a dedicated following, Sarah developed her talking points and stuck to them religiously -- especially during the course of this program. Throughout the eight episodes, we were sold the image of a hard-working, blue collar everywoman who values family above all else and who will protect that family, and her country, by any means necessary -- and preferably with a firearm. She's become an iconic character -- a modern day Annie getting her gun -- embodying badass, maternal and "naughty librarian" appeal in one package. Not an easy feat.

Unfortunately this past Saturday we realized a nasty consequence of the anger that Sarah Palin has come to symbolize -- anger made all the more insidious by the pretty package it was sold in. By almost all accounts, Congresswoman Giffords and the victims of Saturday's shootings were gunned down by a troubled, mentally unbalanced young man -- and that was not Sarah Palin's fault. But as has been pointed out by former President Bill Clinton (among others), the vitriol and anti-government sentiment perpetuated by Sarah and her ilk can be heard by everyone -- mentally stable or not -- and using graphics like the infamous tea party target map from November's elections (with rifle crosshairs over target districts, including Congresswoman Gifford's) can only serve to potentially further incite the passions of those who may not be able to control them. And, like it or not, as a society we all have to take responsibility for those people.

Sarah doesn't seem to understand this perspective - not that we expected her to. Nor does she seem to even acknowledge that her imagery was what it appeared to be. A spokesperson for Sarah's PAC explained that the crosshairs were never intended to be interpreted as rifle sites -- a ridiculous explanation given that her rhetoric has always been defined by Clint Eastwood bravado (perhaps she'll next be trying to convince us that her "Don't retreat, RELOAD" reference evolved from Willow's unwillingness to do laundry). I would have had more respect for her if she made the argument that crosshairs on a map doesn't lead people to commit murder -- a point certainly worth debating.

In this installment we visited a reindeer farm, traveled to Nome and Valdez to mine for gold, took a quick detour to Anchorage for an airshow and ended up at the family compound to celebrate Sarah's parents' 50th wedding anniversary. 11-year-old daughter Piper played the role of student to Sarah's teacher for this hour, and delivered perhaps the most unintentionally astute line of the entire series as they flew into their first destination.

"Down below is the 800 miles of trans-Alaskan pipeline," Sarah explained to Piper as they descended into Valdez, "it travels over three different mountain ranges -- and guess where it ends up?"

"In the water?" Piper quips.

Their first adventure was a kayak trip on Valdez Glacier Lake. Apparently the glacier has thinned over 300 feet in the last century, and seemed to be deteriorating at a rapid rate during their journey as pieces of ice and debris rained down around them -- not that anybody mentioned it. The main purpose of the trip was to recreate part of the journey that prospectors took during the Klondike gold rush of the late 1800s, and to pan for gold on the beach shore. When Piper didn't find enough bling in Valdez, they jetted to Nome where they panned for more gold on a beach lined with people who looked like they were engaged in Alaska's equivalent of playing the slots. As Palins dug and shook sand and ran around, Sarah went on and on about how life was all about competition and hard work and Alaska -- like she was that kid in elementary school who wouldn't stop tapping you on the shoulder saying "guess what?" -- and everyone sighed and said "we know, WE KNOW," hoping somebody -- anybody -- would come along and ask for her autograph so she would leave them alone.

From Nome, they met Todd at the Anchorage Air Show where Sarah talked about crying at the sight of Blue Angels (we're assuming she was referring to the planes) before traveling back home for her parents' 50th anniversary. In the final scene of the series, Sarah and family presented her parents with pieces made from the gold that they had harvested -- and everyone talked about love and family and being true Alaskans and I barfed and it was OVER.