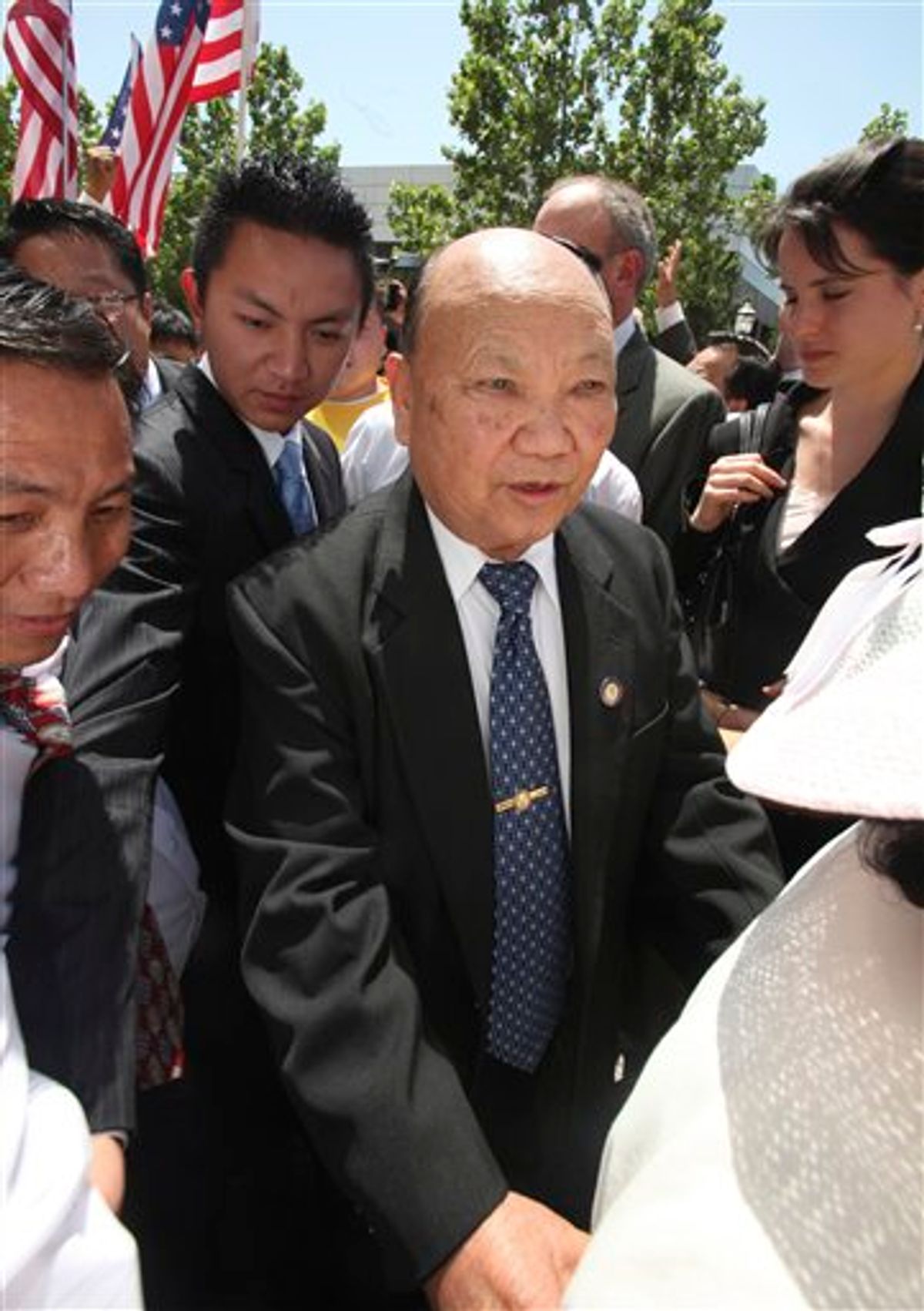 FILE - In this May 11, 2009 file photo, Former Laotian General Vang Pao, center, is escorted by supporters to the federal courthouse, in Sacramento, Calif. Pao, a former general in the Royal Army of Laos who led thousands of Hmong mercenaries in a CIA backed secret army during the Vietnam War, has died. He was 81. Pao died Thursday, Jan. 6, 2011, after being hospitalized for about 10 days, said Michelle Von Tersch, a spokeswoman for Clovis Community Medical Center. (AP Photo/Rich Pedroncelli, File) (AP)
--

Federal prosecutors on Monday dropped all remaining charges against a dozen men once accused of plotting to violently overthrow the communist government of Laos, a move that suddenly ends a 3 1/2-year-old international case that reverberated with the last echoes of the Vietnam War.

Charges against 11 members of California's Hmong community and a former U.S. Army officer were dismissed "in the interests of justice," according to court documents filed in U.S. District Court in Sacramento and obtained by The Associated Press.

The general led Hmong guerrillas in their CIA-backed battle against communists in the 1960s and 1970s. He is revered as a father figure by the 240,000 Hmong now in the U.S., many living in California's Central Valley and the Upper Midwest.

Thousands of Hmong journeyed to Sacramento's federal courthouse to wave American flags in peaceful protests each time there was another hearing in the case.

"They should have dropped it a long time ago," said Blong Xiong, a Fresno city councilman and the first Hmong-American in California to win a city council seat. "We're just happy that it's over with. The cloud over the community is gone, and it will allow the community to mourn the death of the general."

Vang Pao was the target when prosecutors first brought charges in June 2007, based on information provided by an undercover federal agent who showed weapons to the general and others outside a Thai restaurant in Sacramento.

Prosecutors dropped Vang Pao from the case in 2009, however, leading U.S. District Judge Frank Damrell Jr. to wonder in October who remained as the alleged ringleader. The judge dismissed key parts of the case a month later, including the government's charge that the men violated the federal Neutrality Act.

The act prohibits people in the United States from taking part in a military action against the government of another nation with which the U.S. is at peace.

Prosecutors re-evaluated their case after Damrell's ruling, said U.S. Attorney Benjamin Wagner, then "decided that under the totality of circumstances, it is not in the government's interest to continue this prosecution."

Prosecutors faced another key hearing in February, when defense attorneys planned to argue that the case was built on lies and omissions by the Bureau of Alcohol, Tobacco, Firearms and Explosives undercover agent.

"The allegations ... were serious. Preventing violent crimes against a foreign country and its population is our obligation under federal law," Wagner said.

Wagner's spokeswoman, Lauren Horwood, could not say how much the government spent to investigate or prosecute the case. The case produced more than 30,000 pages of evidence and wiretap transcripts, many in foreign languages.

The decision to drop the prosecution was made in collaboration with the U.S. Justice Department's National Security Division, Horwood said. Justice Department attorneys flew repeatedly to Sacramento to help with the sensitive case, which had international diplomatic and national-security overtones.

"Hopefully, the word 'terrorism' now won't be thrown around like nickels, it will be reserved for real threats to American security," said defense attorney Mark Reichel. "It is a great tribute prior to the funeral of Vang Pao. It will allow the celebration of his life to be complete and unblemished at his funeral."

Relatives said they are planning a February memorial service for Vang Pao, who died Thursday after battling pneumonia in a Clovis hospital, located near one of the largest populations of Hmong immigrants in the United States. The general's family is seeking a burial at Arlington National Cemetery in Virginia.

"It's over," said Daniel J. Broderick, a federal defender who represented former Army Lt. Col. Harrison Jack, of Woodland, a Vietnam veteran who was accused of helping to organize the plot. "I can only say, thank heavens. He's extremely grateful they took a long hard look at the case, and we agree this is the absolutely appropriate response."

The government could have pursued charges left in place by Damrell, including conspiracy to violate the Neutrality Act, or could have filed an amended complaint after the judge ruled prosecutors had failed to clearly show that that a military operation existed.

Damrell, who formally dismissed the case Monday, also said the government failed to specify what role each defendant allegedly played, or when the purported military effort began.

"It's never too late to do the right thing," said defense attorney Bill Portanova.