Hubble telescope zeroes in on green blob in space 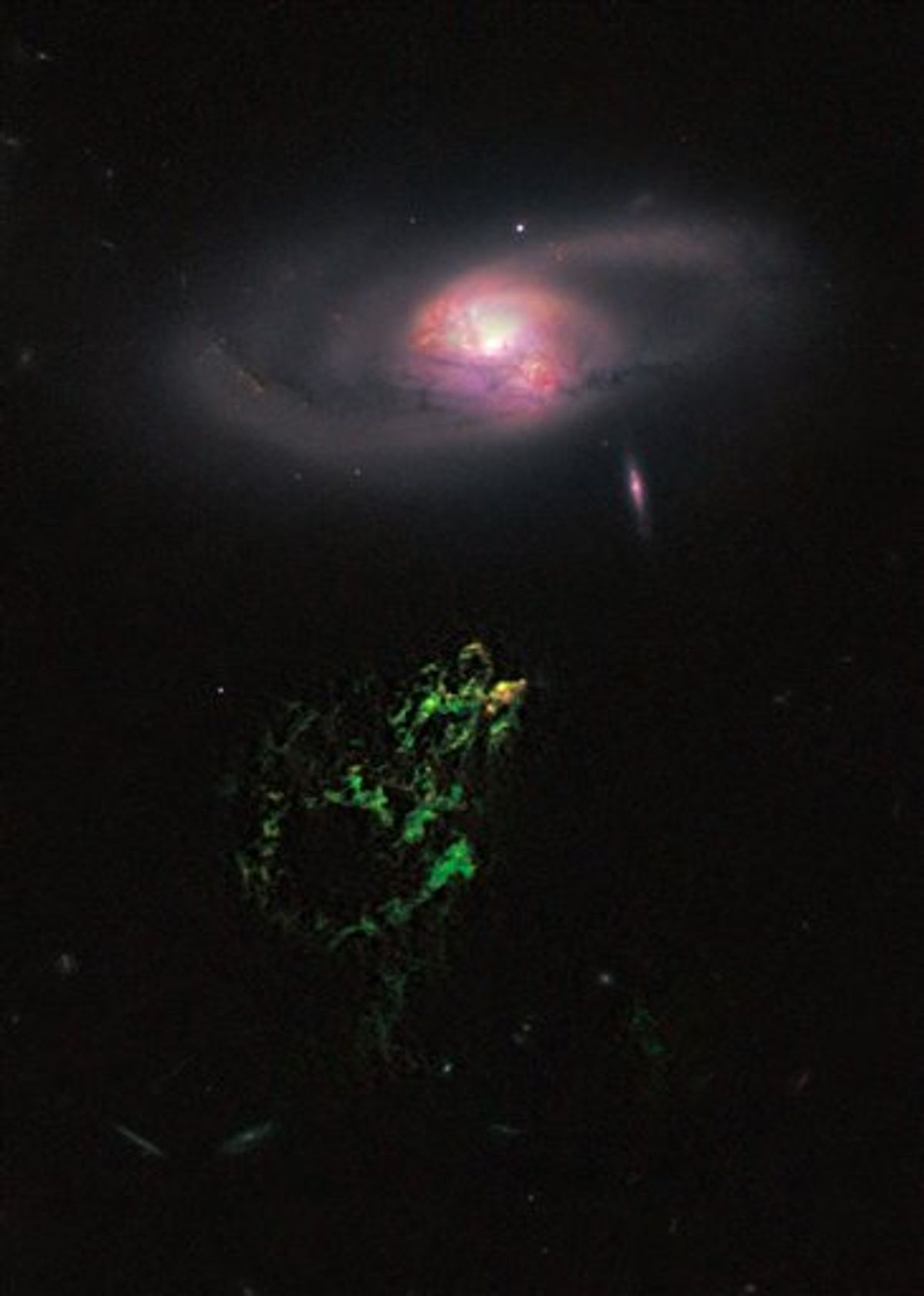 This handout photo provided by NASA, taken April 12, 2010 by the Hubble Space Telescope, shows an unusual, ghostly green blob of gas appears to float near a normal-looking spiral galaxy. NASA released Monday the Hubble Space Telescopes first picture of the mysterious giant glowing green blob of gas called Hannys Voorwerp. The blob is the size of our Milky Way galaxy and is 650 million light years away. Each light year is about 6 trillion miles. The blob was discovered in 2007 by Dutch school teacher Hanny van Arkel. (AP Photo/Hubble Space Telescope Science Institute) (AP)
--

The Hubble Space Telescope got its first peek at a mysterious giant green blob in outer space and found that it's strangely alive.

The bizarre glowing blob is giving birth to new stars, some only a couple million years old, in remote areas of the universe where stars don't normally form.

The blob of gas was first discovered by a Dutch school teacher in 2007 and is named Hanny's Voorwerp (HAN'-nee's-FOR'-vehrp). Voorwerp is Dutch for object.

Parts of the green blob are collapsing and the resulting pressure from that is creating the stars. The stellar nurseries are outside of a normal galaxy, which is usually where stars live.

That makes these "very lonely newborn stars" that are "in the middle of nowhere," said Bill Keel, the University of Alabama astronomer who examined the blob.

The blob is the size of our own Milky Way galaxy and it is 650 million light years away. Each light year is about 6 trillion miles.

The blob is mostly hydrogen gas swirling from a close encounter of two galaxies and it glows because it is illuminated by a quasar in one of the galaxies. A quasar is a bright object full of energy powered by a black hole.

The blob was discovered by elementary school teacher Hanny van Arkel, who was 24 at the time, as part of a worldwide Galaxy Zoo project where everyday people can look at archived star photographs to catalog new objects.

Van Arkel said when she first saw the odd object in 2007 it appeared blue and smaller. The Hubble photo provides a clear picture and better explanation for what is happening around the blob.

"It actually looked like a blue smudge," van Arkel told The Associated Press. "Now it looks like dancing frog in the sky because it's green." She says she can even see what passes for arms and eyes.

Since van Arkel's discovery, astronomers have looked for similar gas blobs and found 18 of them. But all of them are about half the size of Hanny's Voorwerp, Keel said.