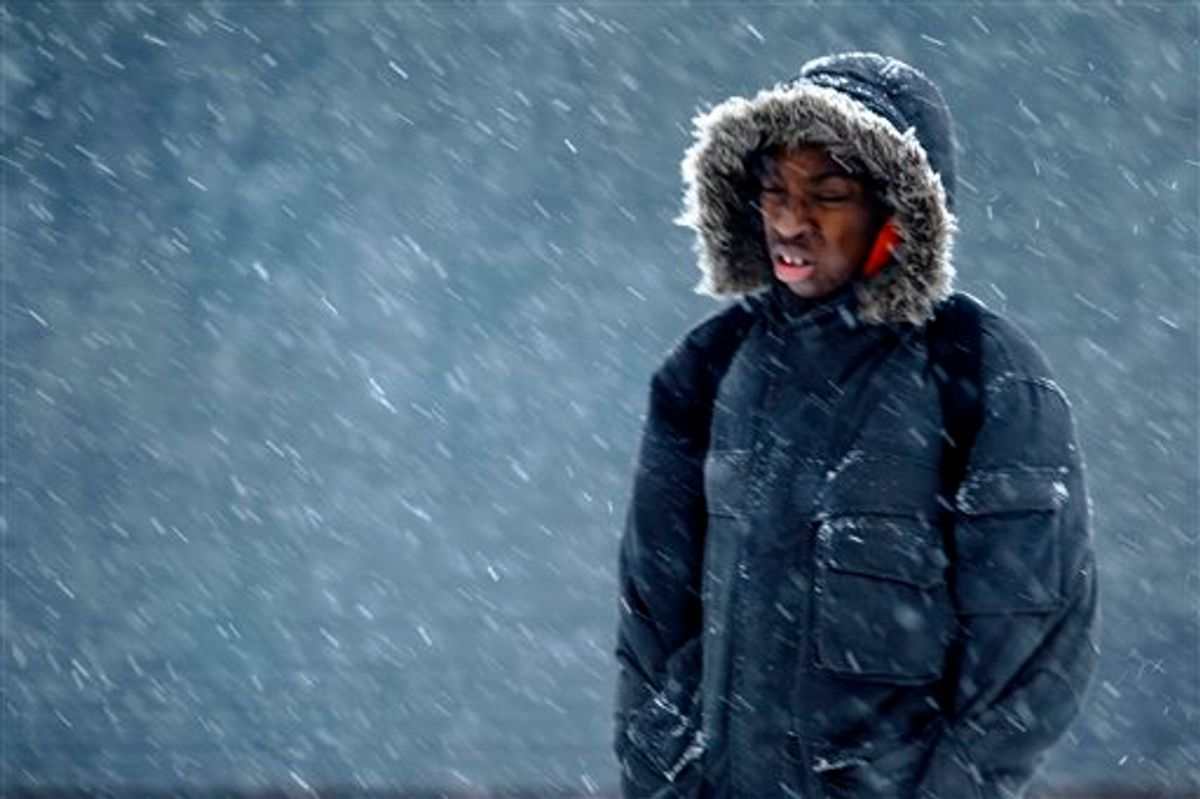 ATLANTA (AP) -- Stranded vehicles littered roadsides Monday as several inches of snow and sleet coated Atlanta and other parts of the South, freezing the morning commute in many areas and canceling thousands of flights at the world's busiest airport.

Sleet, ice and several inches of snow -- as much as 9 inches in some places -- blanketed states from Louisiana to the Carolinas mostly unaccustomed to arctic weather and caused at least one death in Louisiana.

In Atlanta, under three to four inches of snow and ice, state officials were forced to move Monday's inauguration of newly elected Gov. Nathan Deal from the state Capitol steps inside to the shelter of the House chamber. The inaugural gala was scrapped to keep supporters off treacherous roads.

The winter weather began rolling across the South on Sunday, coating bridges and roads with snow, sleet and freezing rain. The governors of Louisiana, Alabama, Georgia and Tennessee declared emergencies and schools and colleges called off classes. Snow and ice had blanketed several cities, including up to 3 inches in parts of Atlanta, which rarely gets so much.

Julie Camardella, an employee of The Smith House Restaurant and Hotel in Dahlonega, said she packed up some clothes and food and stayed the night at the north Georgia hotel so she could be at work early Monday.

"I'm looking out at the square right now, and it's deserted," Camardella said, adding the area got between six and seven inches of snow. "I haven't seen a single car drive by. Everyone is staying in and staying safe."

In Alabama, roads were coated with ice in Shelby County, just south of Birmingham, where Waffle House waitress Stephanie McGougin served eggs and grits to the few diners who could make it inside early Monday. There were plenty of empty seats at the restaurant, which is normally busy but was virtually deserted.

"I think we're about the only place open," McGougin said.

Despite officials imploring people to stay off the roads, interstates around Atlanta were clogged with cars early Monday.

Georgia was expecting up to 6 inches in the northern mountains from the powerful storm that also dumped snow and ice in Mississippi, Alabama, Tennessee, Oklahoma, Arkansas and Texas. Forecasters said the front could also bring sleet and freezing rain lasting into Tuesday in Georgia.

Highway crews were working to keep major roads passable. Georgia Department of Tranportation spokesman Rick Parham said Monday morning that at least one lane was open in each direction on all major highways.

Unlike other times when an inch or two of snow coats the ground, temperatures were not expected above freezing into Tuesday, so it won't melt.

"Since it's going to be pretty cold over the next few days, we could see whatever accumulates sticking around for a few days," National Weather Service meteorologist Daniel Lamb said.

Outside Nashville, Carla Gaster, the facilities manager for 20/20 Research, looked out her kitchen window in Ashland City before dawn Monday and said snow was still falling.

"It's really soft, fluffy and pretty," Gaster said, adding she was glad she didn't have to drive in it.

"I work for a company that allows me to work from home," she said.

Tim Loucks, general manager of the Pilot Truck Stop in the northwestern Louisiana town of Haughton, said he had an empty diner as truckers who slept on his lot during the night were pulling out.

"Interstate 20 is open, but it's moving slow," Loucks said. "There's ice on the bridges and overpasses."

Loucks said the situation was different for drivers trying to drive on local roads. "If you're off the main roads, it's a skating rink," he said.

As snow began falling in downtown Atlanta on Sunday evening, a couple could be seen making snow angels in a park. Later, a few people ventured out from nearby hotels to throw snowballs as snowflakes fell.

In northern Louisiana, state police said a woman died Sunday in a single-vehicle crash on an ice covered highway. Kaneshia Logan, 30, died when her SUV slid down an embankment on Interstate 20 and hit a tree, trooper Cordell Williams said.

The storm caused a second death in Louisiana on Sunday evening. Trooper Mark Dennis says that in Lincoln Parish, a 62-year-old woman died Sunday evening after a car she was riding ran off a state highway and struck a tree. Guadalupe Marroquin died at a Ruston hospital a short time later. Dennis says troopers reported icy roads in the area at the time.

Alabama Gov. Bob Riley said workers had readied snow and salt trucks to help clear icy roads, and he asked all residents to stay home through Monday unless it is imperative to travel.

The snow in downtown Atlanta came down heavily for hours. Other areas were experiencing thunder snow and even lightning.

Cars were having trouble on the slippery streets and highways all over the South, with numerous slideoffs, though there were no immediate reports of serious accidents. Off and on, the snow was mixing with sleet around Atlanta, said National Weather Service meteorologist Robert Beasley.

Thousands of flights were canceled at Hartsfield-Jackson Atlanta International Airport, the world's busiest.

Associated Press writers Carol Druga and Debbie Newby in Atlanta, Jay Reeves in Birmingham, Ala., Holbrook Mohr in Jackson, Miss., and Schuyler Dixon in Dallas contributed to this story.