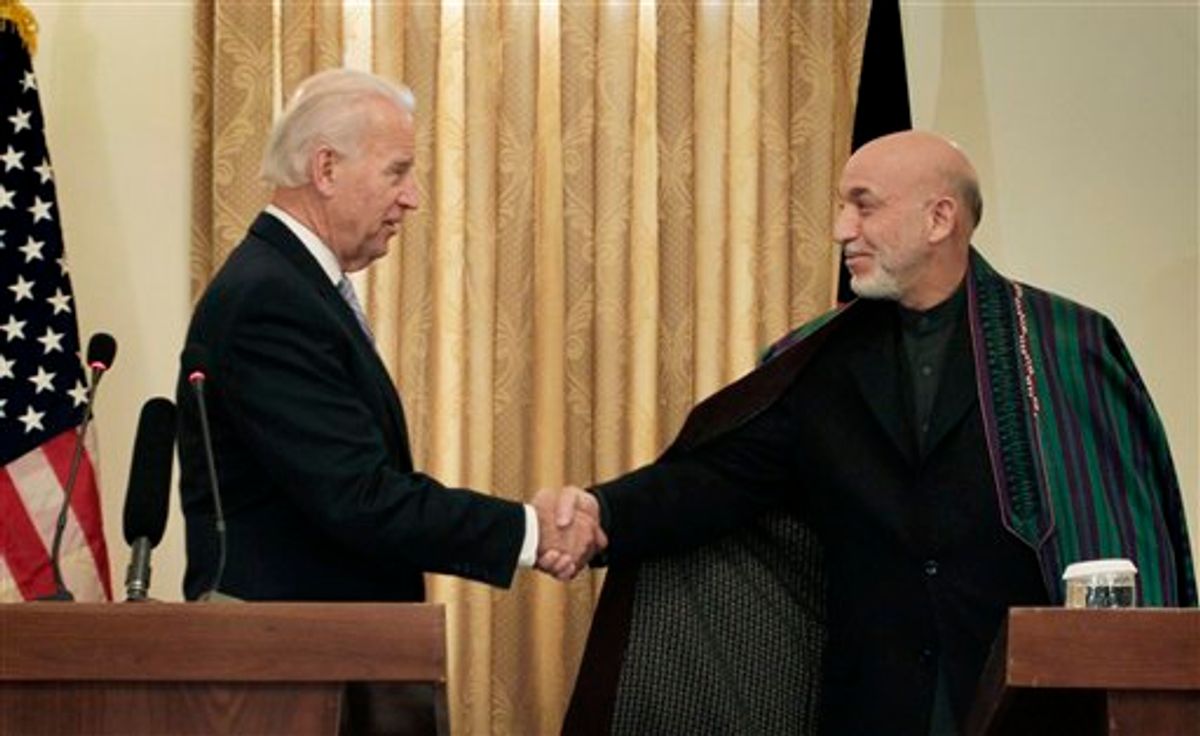 Vice President Joe Biden assured Afghan President Hamid Karzai on Tuesday that the United States will not abandon the country after 2014 when the U.S.-led coalition plans to hand over control of security to the Afghans.

After months of acrimony over corruption and intensified NATO military operations, Biden said the two countries are now on the same page. He also assured the mercurial Karzai that the United States was not in his country to "govern" and said Afghans are capable of building up their own institutions.

"It is not our intention to govern or to nation build," Biden said, adding that if "the Afghan people want it, we won't leave in 2014."

President Barack Obama has discussed maintaining a counterterrorism capability in Afghanistan after 2014 and the Afghan security force training program is expected to last until 2016. As recently as Dec. 16, Obama said the U.S. and its NATO allies would have an enduring presence there after 2014, although the details of that were unclear.

Biden's positive remarks seemed to be part of a broader effort to improve an often rocky relationship between the U.S. and Karzai. His visit, which began Monday, comes at the start of what has been described by NATO officials as a crucial year in the fight to break the Taliban.

"I think it's fair to say that we've largely arrested the Taliban momentum here in some very important areas, particularly in Helmand and Kandahar. But these gains as you pointed out to me Mr. President, as we know, are fragile and reversible. And as the president knows, sustaining them is going to require the Afghans to assume the responsibility for security and governance," Biden said at a joint news conference.

Although military forces are making headway against the insurgency and have reclaimed parts of the south, it remains unclear if the gains will be permanent. The Obama administration acknowledged in a year-end review that while Taliban momentum has been stopped in some areas and reversed in others, "gains remain fragile and reversible."

Military commanders argue they now finally have the troops and equipment they need to pursue a campaign that went fallow in the years following the invasion of Afghanistan. The buildup of forces began in the summer of 2009 as troops were freed up from Iraq and peaked at 140,000 in August, with the infusion of 30,000 additional U.S. troops.

Obama also needs some measure of success to boost support for what has become an unpopular and very costly war, both at home and among the nations supplying troops to the coalition.

The U.S. has said repeatedly that July 2011 will mark the beginning of the troop withdrawals and that their size would depend on military conditions. Military officials have said privately they expect the reductions to be small.

Just ahead of their news conference, Karzai said they had worked "on the transition," a reference to the decision made last November at a NATO summit in Lisbon to transfer responsibility for the security of the country to Afghan forces within four years.

Biden thanked Karzai for his efforts at the summit and said: "I think it's gotten us on the same page."

Tensions have surfaced between the Obama administration and an increasingly nationalistic Karzai, whose government is plagued by charges of corruption. U.S. officials have expressed grave concerns about how corruption is affecting efforts to stabilize and rebuild the country.

Last week Karzai shot back, complaining that foreign powers were meddling in the country's internal affairs.

Karzai has in the past also expressed his concerns about some of NATO's military operations aimed at crushing the insurgency, specifically night raids carried out by special forces. NATO says the night raids have taken a significant toll on the leadership of insurgent networks.

Karzai's office said Tuesday that a delegation sent to Kandahar to assess the effects of an offensive which started there in the spring has identified $100 million worth of damage. A statement said the delegation determined that homes, fruit orchards and crops were unnecessarily destroyed, and that the operation was conducted during harvest time. NATO did not immediately respond to a request for comment.

But none of that tension was visible at their news conference, where both men lavished each other with praise. Biden, who in the past has been critical of Karzai, lauded the courage he showed when he took over the government after the Taliban were ousted.

"I also want to point out and pay tribute to not just your leadership, Mr. President, but in those days, in the circumstances, people forget is the extraordinary personal courage, physical courage, you showed. It is, it was notable then and it's worth noting now," Biden said.

Biden's visit could be aimed in part at smoothing things over with Karzai.

A senior administration official, speaking on condition of anonymity because he was not authorized to talk publicly with the media, said Obama asked Biden ahead of the meeting to relay his disappointment to Karzai that he was unable to travel to Kabul last month during his one-day trip to Afghanistan on Dec. 3. The White House said foul weather foiled plans to take Obama to the presidential palace in Kabul from the Bagram Air Field military base, where he landed. The change of plans was seen by some in Karzai's circle as a snub.

A spokesman for Karzai, Siamak Herawi, said that Biden brought a "very clear" message from Obama that "the United States is fully supporting the government of Afghanistan and all its decisions."