Who's afraid of Frances Fox Piven?

Glenn Beck says the elderly professor is as dangerous as the armed Hutaree militia. That's not extreme rhetoric? 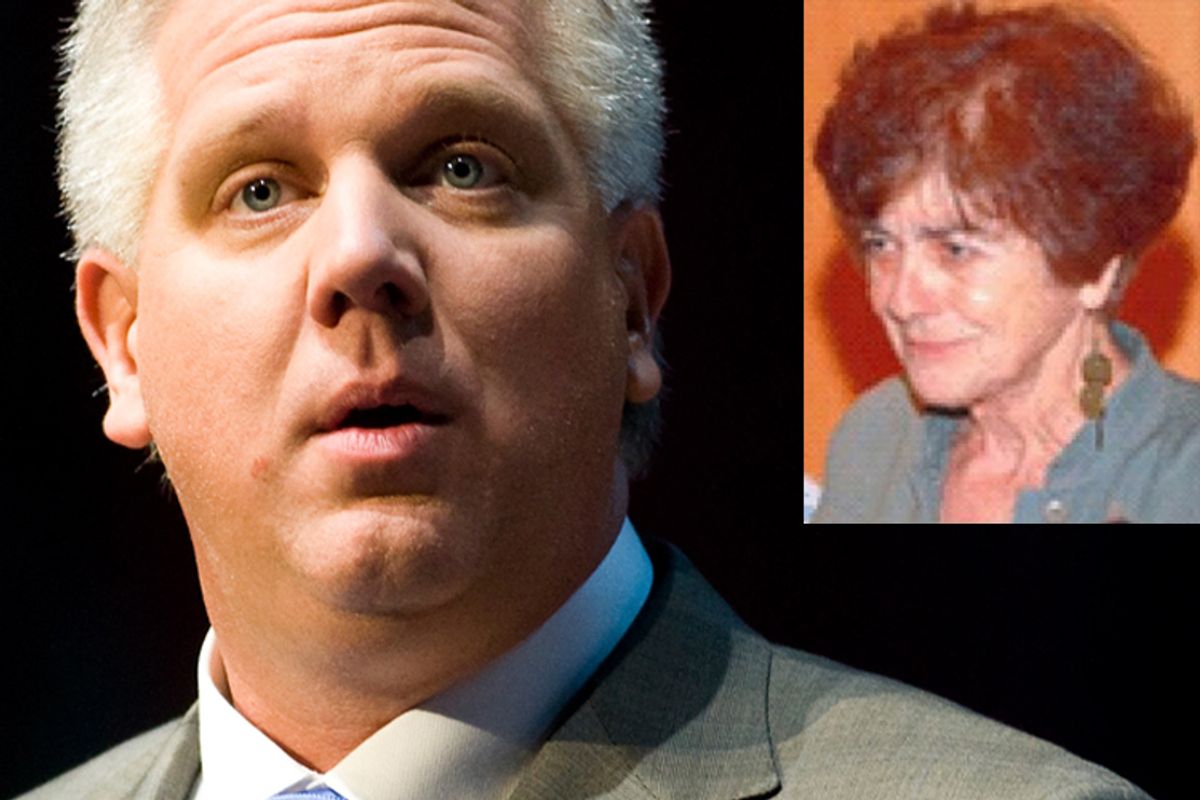 Before I get to Glenn Beck's latest crazy talk, I want to acknowledge some conservatives who've done the right thing since the Tucson, Ariz., massacre. Very few have condemned the violent, eliminationist rhetoric of their ideological colleagues -- in fact, most have done the opposite, trying to at once deny politics had anything to do with Jared Lee Loughner's attempt to assassinate Rep. Gabrielle Giffords, while also insisting he's a leftist because he listed "The Communist Manifesto" as a favorite book.

But MSNBC's Joe Scarborough is a rare exception: On "Morning Joe" Monday the former GOP congressman said he thought Sarah Palin should apologize for the "violent imagery" she's used on the campaign trail.

Is this not a time for people, like Sarah Palin, who have used violent imagery – she just has. I know some of my conservative friends and family members won’t like that reality. Or, Michele Bachmann, who said she wants Minnesotans armed and dangerous. Isn’t this an opportune time for them to apologize -– not saying that it led to anything — but just saying that they’ve been irresponsible in their rhetoric and they’re going to be more careful moving forward?

Likewise, David Frum wrote on Sunday that "as we acknowledge that extremist rhetoric did not incite this crime, it should also be acknowledged that the rhetoric has been extreme, and potentially dangerously so" (a point Frum made, to his credit, in August 2009, when Tea Partyers began toting guns to President Obama's speeches and breaking up congressional town halls). On Monday Frum criticized Palin's decision to merely send "condolences" to the Giffords family Saturday, and ignore the controversy around her SarahPAC map that put Giffords in gun sights last March. The statement, Frum noted:

[W]as about Palin, not about Giffords. It was defensive, not inspiring. And it was petty at a moment when Palin had been handed perhaps her last clear chance to show herself presidentially magnanimous.

There: Was that so hard? It must be: Scarborough and Frum are virtually alone on the right; most commentators are still railing against anyone who suggests the violent political rhetoric of the last two years might possibly have helped create a climate where violence seems acceptable. But the fact that those two conservatives were able to form a simple, lucid statement -- that the personal demonization of liberals has maybe gone too far on the right -- makes the right-wing braying seem even crazier: How hard is it to say, "Hey, we can live without putting candidates in cross hairs!" Or, um, surveyors' marks.

Instead, Palin and Glenn Beck had a pity party on Monday, with Beck telling Palin she should protect herself because she could be the next victim of violence. "Sarah, as you know, peace is always the answer. I know you're feeling the same heat -- if not much more -- on this. I want you to know you have my support. But please look into protection for your family. An attempt on you could bring the republic down." Palin replied with fractured gratitude: "Our children will not have peace if politicos just capitalize on this to succeed in portraying anyone as inciting terror and violence. Thanks for all you do to send the message of truth and love and God as the answer."

But Beck went on to say he denounced violence in a loony statement Alex Pareene detailed here. The worst thing in Beck's grandiose "open letter" was this line:

I denounce violent threats and calls for the destruction of our system – regardless of their underlying ideology – whether they come from the Hutaree Militia or Frances Fox Piven.

Yes, Beck compared Frances Fox Piven, an elderly university professor, with members of an armed, violent anti-government militia broken up by the government last year. If you follow Beck's rantings, you know Piven is the object of feverish hatred on the paranoid right for her role in the welfare rights movement of the 1960s. In 1966 she and her late husband, Richard Cloward, wrote an article for the Nation that laid out a plan to radicalize poor people and shake the welfare system by signing up everyone eligible for public aid, demonstrating society's inability to accommodate them and precipitating a "crisis" that would "lead to legislation for a guaranteed annual income and thus an end to poverty." Revolutionary!

Actually, if you read the Piven-Cloward piece 45 years later, you'll recognize that back then, lefty rhetoric was in fact a little overheated. I'd argue, also with hindsight, that Piven and other folks' work on welfare rights for the poor should have been accompanied by more agitation to demand employment rights. I don't believe welfare created a "culture of poverty," but I think it's one of many social developments that excluded and marginalized the poor, especially in the nation's crumbling inner cities.

Also with hindsight, it's clear that the Piven-Cloward strategy was kind of, well, wrong: It hurt the Democrats, as it was actually designed to (read on), but instead of giving us federal legislation for a "guaranteed national income," it helped give us 45 years of Republican domination. Here's what they thought:

"Widespread campaigns to register the eligible poor for welfare aid, and to help existing recipients obtain their full benefits, would produce bureaucratic disruption in welfare agencies and fiscal disruption in local and state governments. These disruptions would generate severe political strains, and deepen existing divisions among elements in the big-city Democratic coalition: the remaining white middle class, the white working-class ethnic groups and the growing minority poor. To avoid a further weakening of that historic coalition, a national Democratic administration would be constrained to advance a federal solution to poverty that would override local welfare failures, local class and racial conflicts and local revenue dilemmas."

And deliver that guaranteed national income we've enjoyed as a basic human right since ... oh wait, that never happened.

Instead, in 2011, nutty right-wingers are acting as though Piven could still bring down American capitalism. And Fox News' marquee banshee Glenn Beck is singling her out as someone who shares the goal of an armed anti-government militia. That's dangerous to Piven, and to American political debate. Let's hope we see more encouraging signs of conscience on the right in the days to come.