My husband brought a knife to a political rally

After a tragedy, people heap blame on the mentally ill and their families. For us, getting help was near impossible 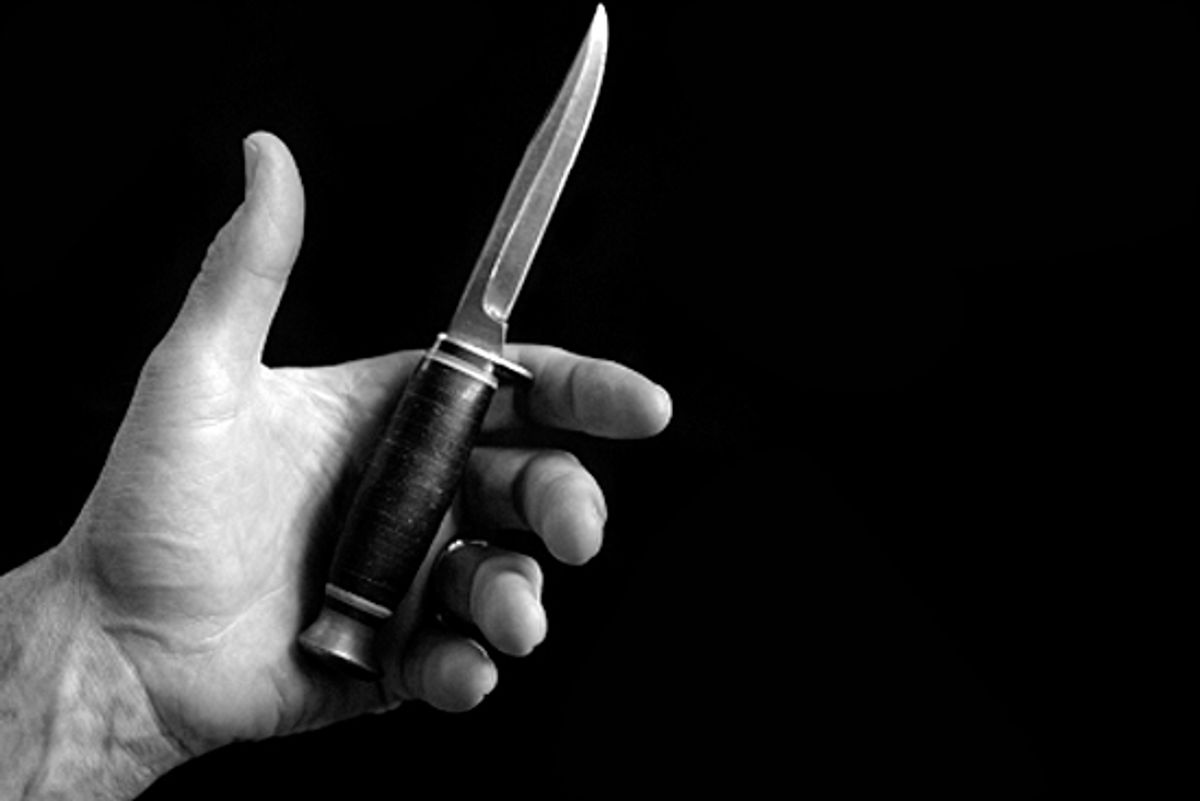 My husband, Stew, died of cancer three years ago, but he also was severely mentally ill. He was more than depressed, more than anxious, he was occasionally a full-blown psychotic. Over the years he was diagnosed as paranoid schizophrenic, schizo-affective, borderline, bipolar, depressed and with major anxiety.

I've recently seen comments on websites regarding the Arizona shootings: People say the shooter should have gotten help, that his parents should have done something, that something should be done about crazies before a thing like this happens.

As if we hadn't considered that before.

Let me tell you what happened with us. I was already married to Stew when he started becoming mentally ill. It was a slow descent. We kept thinking that he was getting better, or would get better, and when necessary, when he was suicidal, which he was several times before the Great Psychotic Break that led to years of uncertainty and pain, he would even take himself to the hospital. He was good about that, about seeking help. At the time he had a job, and health insurance. He worked for a large health insurance company, so insurance was a given. But what could they do for him at the emergency room? Talk to him, make him promise not to hurt himself, and then send him home again, that's what.

So we'd go home again and hope things would get better.

When the Great Psychotic Break came it brought with it blood, all his, and I took him to the E.R. They signed him up for daily outpatient treatment, and he couldn't return to work for weeks. When I went to tell his boss what was going on he stood there and listened, and then visibly stepped back from me, as if I might infect him with the contamination of mental illness. He began backing away, waving feebly as if to shoo me and mental illness away.

Despite having been a valued employee and a likable guy, Stew's co-workers ignored him during this period. Perhaps they thought the less said the better, but Stew would have greatly appreciated knowing anyone cared. After having contributed to cards when others were sick and helping others out when they needed it and then being ignored during his crisis, he felt more isolated than ever.

This is how it starts, the isolation. Let's ignore the mentally ill guy and no one will catch it.

He returned to work and everyone pretended nothing had happened. But it had. Anyway, he didn't get better. He'd get far worse before he'd get better.

Stew lost his job because he couldn't work. He had six months of disability, and during that time we had insurance through Cobra. He had a psychiatrist, a therapist and many meds. Some made him sleepy, some made him angry, mostly they made him dull and foggy, and he became a ghost of himself. He saw things that weren't there. He heard voices that weren't there. He struggled with knowing what was real and what was not.

The diagnoses changed, he didn't fit into a category. And then the disability and the health insurance ran out.

So then what? We struggled through. His meds cost several hundred dollars a month. His psychiatrist eventually fired him because we couldn't afford her. His therapist hung in there and kept treating him even when we could only make token payments. I was working, but I spent at least several hours every day making sure he was safe and not suffering too much, so my income was spotty and I was always tired. His parents sent money. We went various places to see if he could get help. By then he was living in his own apartment. One agency told us there was nothing they could do because he still had a roof over his head. "Come back when you're on the streets," they said, "And then we can get you on the list."

Oh good. I left messages with no return calls. I insisted his psychiatrist, who had dumped him, provide a prescription so he could keep getting his anti-psychotics. She did so grudgingly. I monitored his medications. I kept track of him. And both of us lived in a state of isolation. Sometimes we both collapsed under the weight of our isolation and desperation. I sold anything I had that had any value.

And one day he went to a political rally with a knife. I'm not sure why, but I knew he was angry and thought that a candidate had to be stopped. Who knows why these things happen? His rages were legendary, though he never ever hurt anyone. The political rally was a bust because he couldn't find a parking space. Sometimes no parking is a good thing, no? He had no plan for what he would do once he got there. He was passionate about politics, always had been, and was knowledgeable and well-read. It was not that his political views were askew. The problem was his idea that it was up to him to do something about it, something that no one else would do.

When he came back to my apartment and told me, I was straight with him. "If you ever do anything like that again, or give any indication you might, I will have to call 911 on you."

And I would have.

Dealing with mental illness is really hard. If you haven't had voices in your head telling you to cut your own throat you may not understand how very difficult it is, how very isolating, how it can be so very hard to tell the difference between reality and what's only in your own head.

When Stew was dying of cancer he was more at peace than I'd seen him for years. He wanted to live, and he'd begun recovering from his demons. But once he was told he was terminal he realized that this was one way to ensure he'd be free of the demons forever. Death could not compete with mental illness. For him, it was a release.

Monique Colver is currently working on a memoir about her husband's struggles with mental illness.