Forget, for a moment, Manhattan and New England, and let the Caribbean's sun and sea take over

By Be Felicia Lee 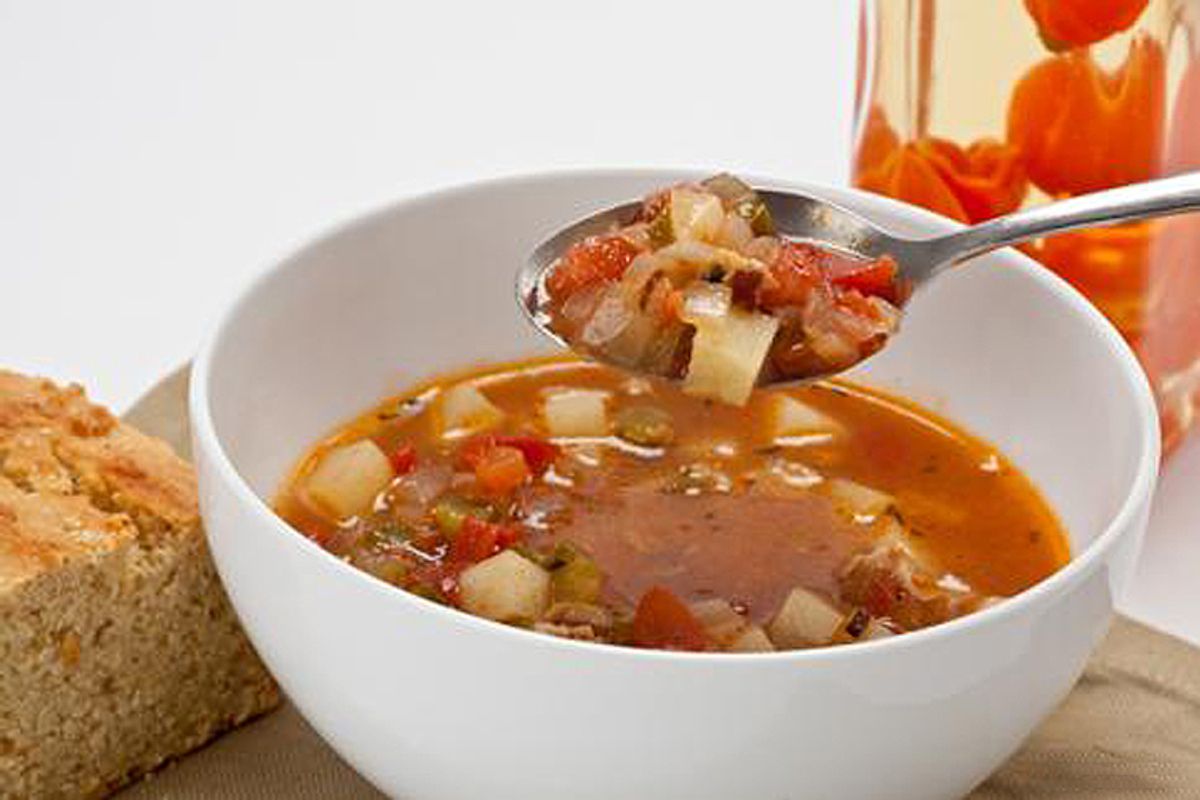 When most people think of a steaming hot bowl of clam chowder, they don’t think of Florida. But they should.

I didn’t think about clam chowder when I moved out here, either. But I did think a lot about how bummed I was to leave behind the culinary bounty of Los Angeles, where I had spent much of my life in a state of joyful gluttony. There are certain bragging rights to growing up in the town that invented French dip sandwiches, chili burgers, the Cobb salad, and kimchee-topped tacos.

My soon-to-be hometown of Gainesville, Fla., on the other hand, is known for only one contribution to the culinary world: Gatorade. And the few other Floridian specialties I’d heard of are tasty but shamelessly brainless celebrations of sea, sun and culinary sloth: key lime pie (made with a store-bought crust and a filling based on canned condensed milk). Stone crab claws (boil, chill and you’re good to go). Smoked mullet (invariably smoked by someone who's not you).

There was no escaping facts: Life in Gainesville was going to be a bore, at least where food was concerned.

But then I discovered a surprise: Flipping through a copy of the late, lamented Gourmet shortly before moving out here, I found Jane and Michael Stern’s review of O’Steen’s, a modest seafood shack in St. Augustine – only an hour’s drive from Gainesville. Besides delectable fried shrimp enrobed in a gossamer batter, the Sterns wrote, O’Steen's boasted a hyper-local specialty little known even in Florida: Minorcan clam chowder, a smoky, spicy, tomato-based concoction utterly unlike the goopy white stuff called clam chowder up north.

I knew I had to make a trip to St. Augustine to try some once I settled in. And when I finally did, I fell in love with both the town and the chowder.

While Florida’s best-known places and foods reflect a carefree celebration of sea and sun, St. Augustine (and Minorcan clam chowder) are products of a darker and lesser-known set of Florida traditions: slaughter, servitude and lots of hot peppers.

St. Augustine has its share of gorgeous beaches, but it’s not a place for a spring break blowout, unless your idea of a blowout involves 17th century Spanish architecture and tales of murder. Founded in 1565, St. Augustine is the oldest continuously inhabited settlement in the U.S. The Matanzas River, which runs through the city, is named for the Spanish word for "slaughter" – it was by this river that the colonial Spanish captured and killed 250 shipwrecked French Huguenots in 1564. And friends from other parts of Florida tell me that the best touristy thing to do in St. Augustine is to take a nighttime ghost tour: apparently, there are few places in the historic old quarter not associated with a gruesome death or two.

The Minorcan immigrants who brought their clam chowder to St. Augustine had better luck in the town than the poor Huguenots, but their odyssey began badly. They initially arrived near present-day New Smyrna in the 18th century as indentured servants contracted to work on indigo plantations. Many died on the journey from Minorca, and yet more soon died from overwork or succumbed to starvation and malaria.

After being released from their indentures (how they got released is an intriguing story, but unrelated to the matter of clam chowder), the Minorcans moved up the coast to St. Augustine and settled in as farmers and fishermen. Descendants of these settlers still live in the area and boast of local roots spanning 11 or more generations.

Minorcan clam chowder -- tomato-based and flavored with bay leaves, bacon and hot peppers -- bears a superficial resemblance to Manhattan-style clam chowder, but with a distinctively Mediterranean vibe of its own. Its defining feature, which makes it uniquely Minorcan, is the presence of datil peppers -- fiery little flavor bombs with a crazy-good aroma of pineapple and passion fruit. How datils came to be grown by, and intimately associated with, Florida's Minorcan community remains a mystery: The peppers are native to the Caribbean, rather than the Minorcans' Mediterranean homeland.

Like the dishes they appear in, datils remain a local specialty: Even now, they are commercially grown only in and near St. Augustine. (I bought a very prolific datil bush at a farmers’ market this year; it’s one of the wisest investments I’ve ever made.)

Like many Florida specialties, Minorcan clam chowder is a product of sunshine and the sea. But its history and its layers of heat, smoke and spice evoke not so much a day on the beach as sunshine on ancient cobblestones and a surging Atlantic bearing ships full of strangers with unknown intentions. When you live in a place defined by sunshine, lingering in the shadows can be a joy.

There is not much variation among recipes for Minorcan clam chowder; the choices of vegetables included may vary a bit, and some recipes may call for salt pork instead of bacon. But all include a single bummer of a caveat: If it doesn’t include actual datil peppers, it’s not the real deal.

My version is a composite of several recipes. The recipe below makes two changes from some of the "authentic" recipes I’ve seen. First, most recipes add the clams close to the beginning of the cooking process, cooking them -- along with the vegetables and seasonings -- for an hour or more. I don’t want my poor little clams reduced to shriveled bits of rubber, so I prefer to add mine at the end of the cooking process.

Second, given that a vast majority of the world’s population lives nowhere near St. Augustine, I offer a pragmatically serviceable alternative to datil peppers: habanero chiles, which are closely related to them and very similar in appearance and (kick-ass) heat level. Like datils, habaneros have an alluring tropical fruit aroma -- just not the same one. But if you can beg, borrow or steal a datil, do it; you won’t regret it.

While a chowder made from habaneros may not boast the exact same flavor -- nor the same cultural and historical resonance -- as one made with datils, it will still be magnitudes better than most pasty New England or one-note Manhattan clam chowders you’ve ever had.

MORE FROM Be Felicia Lee