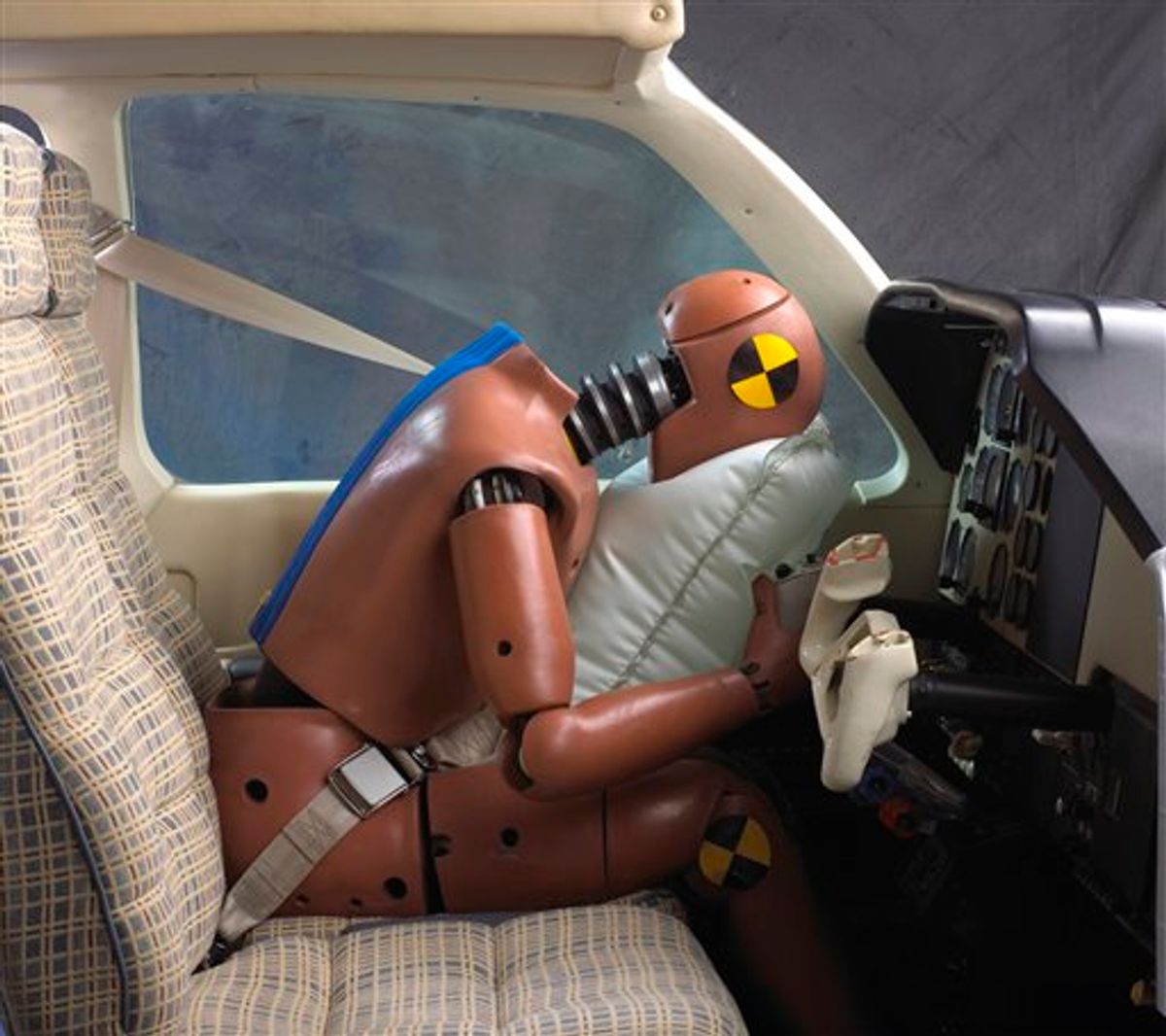 This image provided by AmSafe Inc., demonstrates an aviation airbag using a crash dummy. The airbags are located on the shoulder harness and deploy on impact. The National Transportation Safety Board is set to release a study on Tuesday, Jan. 11, 2011, of 138 accidents involving planes equipped with air bags. (AP Photo/AmSafe Inc.) (AP)
--

Federal safety officials urged Tuesday that aircraft owners be required to retrofit small planes with shoulder-lap seatbelts, but stopped short of calling for the installation of air bags.

A three-year study of small plane accidents released by the National Transportation Safety Board found several cases in which air bags prevented serious injuries or fatalities. But investigators said that since only about 7,000 planes have air bags, there haven't been enough accidents yet to judge whether they should be required on all planes.

Although airbags have been mandated in automobiles for over a decade, the aviation industry has no such requirement for small aircraft.

"The good news is that over 30 manufacturers have stepped up to the plate and offer air bags as standard or optional equipment," NTSB chairman Deborah Hersman said.

There are more than 200,000 general aviation aircraft, mostly small, single-engine planes, NTSB officials said. The average age of the planes is about 40-years-old, officials said.

A second study, also released by NTSB on Tuesday, concluded that fatalities and serious injuries are 50 percent more likely to occur in accidents where pilots and passengers are wearing lap-only belts, rather than shoulder-lap belts. The study looked at 37,000 accidents involving single-engine planes between 1983 and 2008.

The board estimated that between 13 percent and 26 percent of small planes don't have shoulder belts. The cost of adding shoulder belts ranges from about $150 to $300 per seat, officials said.

The board is only able to make nonbinding recommendations.

FAA first approved air bags for use in small planes in 2003. Some aircraft manufacturers, including Cessna and Cirrus, voluntarily began including them as standard equipment on new planes beginning in 2005.

AmSafe Inc. of Phoenix, the only U.S. maker of air bags for planes, has documented 20 cases over the past several years in which its air bags were important to the survival of general aviation pilots and passengers, Joseph Smith, an AmSafe manager, said in an interview.

There were 474 people killed in 1,474 general aviation accidents in 2009, the latest year for which NTSB figures are available. While accident rate for commercial airlines has dropped significantly over the past decade, the general aviation rate for the same period has remained largely unchanged.

Unlike automobile air bags, AmSafe air bags are integrated into either the shoulder harness or lap portion of airplane seatbelts.

AmSafe doesn't make air bags for helicopters, but there's no reason why it shouldn't be possible, Smith said.