Verizon iPhone 4: Everything you need to know

After months of speculation, Apple announced this morning it would offer a Verizon iPhone. What's the difference? 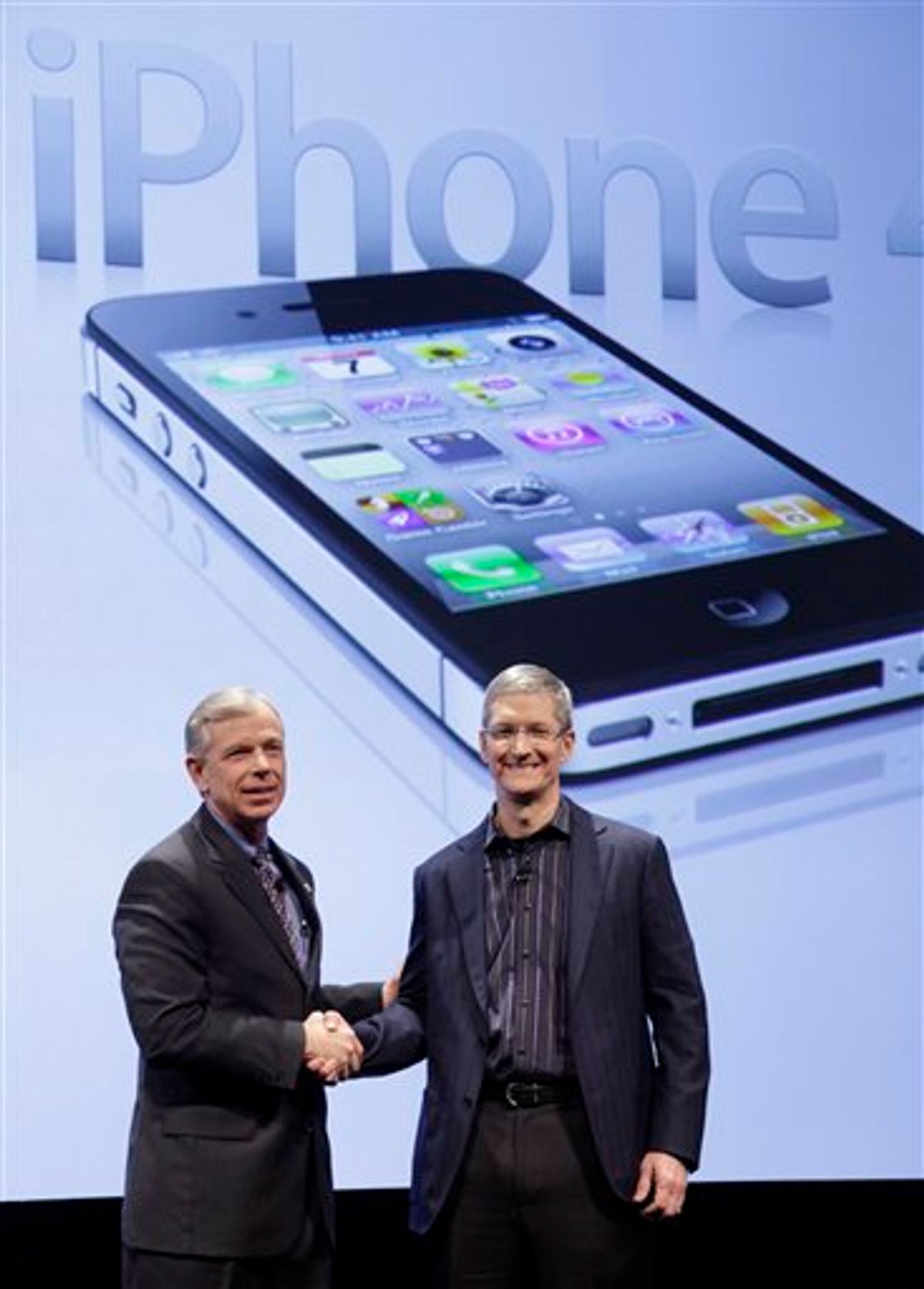 Lowell McAdam, left, Verizon President and COO, and Tim Cook, COO of Apple, announce that Verizon Wireless will carry Apple's iPhone, Tuesday, Jan. 11, 2011 in New York. Verizon Wireless and Apple@ today announced that the iPhone@ 4 will be available on the Verizon Wireless network beginning on Thursday, February 10. Qualified Verizon Wireless customers will be given the exclusive opportunity to pre-order iPhone 4 online on February 3, ahead of general availability.(AP Photo/Mark Lennihan) (AP)
--

The Verizon iPhone is a huge deal, to people who care about Apple products, mostly, but also to the communications industry as a whole. Since that world-stopping, heartthrobbing day in June 2007 when Steve Jobs took the stage at Macworld wearing that outfit and that smirk, the iPhone has served as a pacemaker for the mobile device industry. And now that the once verboten Verizon network is iPhone-enabled, upward of 12 million more people will be staring at Apple-emblazoned handsets.

So whether you own slash love your iPhone, can't wait to get one on the Verizon network or really just don't understand why any of this matters, read on. Or just skip to the end where I listed the key details.

First things first. The Verizon iPhone 4 is almost identical to the AT&T iPhone 4. No new whistles, no new bells, and perhaps not even an improved antenna. Same price, same screen, same restricted app store. It's sexy because it's Verizon. (Yes, that's the last time I describe Verizon as sexy, but some people are seriously excited about this.)

Nevertheless, there are six key differences between the AT&T iPhone 4 and the Verizon iPhone:

1. The Verizon iPhone plan is more expensive. Even though the phones themselves both start at $199 for 16GB, Verizon's cheapest plan costs $75 a month for 450 minutes, 250 texts, unlimited data. AT&T starts at -- the still kinda pricey -- $59 for fewer texts and limited data. So I guess that might work out to be about the same.

2. The Verizon iPhone will not work everywhere abroad. Only about 40 countries will support the CDMA chip that powers the Verizon network. So think twice before thinking you can Google Map your way to the Eiffel Tower on that Valentine's Day trip to Paris you're planning. AT&T's GSM is far more universal around the globe.

3. The Verizon iPhone does not support Web surfing or e-mail while talking. This one kinda stinks. Ever wanted to call your mom on the phone to describe how your new puppy ate your couch and send her a picture of the wreckage at the same time? (I have.) Well, you can't with the new Verizon iPhone.

4. The Verizon iPhone might have a better network. The reason you can't use the CDMA-powered phone in other countries is also the reason that many believe that the Verizon network will produce better reception and fewer dropped calls. AT&T's GSM-powered network is newer than CDMA so there are fewer towers and more congestion. But as Salon alum Farhad Manjoo points out on Slate, it all depends on where you live. Areas with a lot of iPhones will experience a lot of congestion and dropped calls, regardless of the network.

5. The Verizon iPhone creates a Free Wi-Fi Hot Spot??? Yes! While AT&T also offers this type of service -- it's called "tethering" -- they charge a fee for it. But then again, the monthly service plan costs more to begin with.

6. The Verizon iPhone 4 will likely have a shorter shelf life. Since Apple cranks out new iPhone models every June, there's a good chance this exciting new phone will be a boring old phone in five months.

Well, that sounded more negative than I'd expected. The Verizon iPhone 4 is better than the Apple Newton. It's probably not as robotic as the Droid. But if you've been waiting three years to buy one, now you finally can.

(Full disclosure: I'm an AT&T customer. And I think the phone service is awful, the bills are too expensive, and the iPhone culture is ultimately a little bit destructive to old-fashioned American fun. But new-fashioned fun is gonna be all the rage in 2011.)