At last! Bitter blockers promises that you will never have to taste bitterness again. Literally. Does it work? 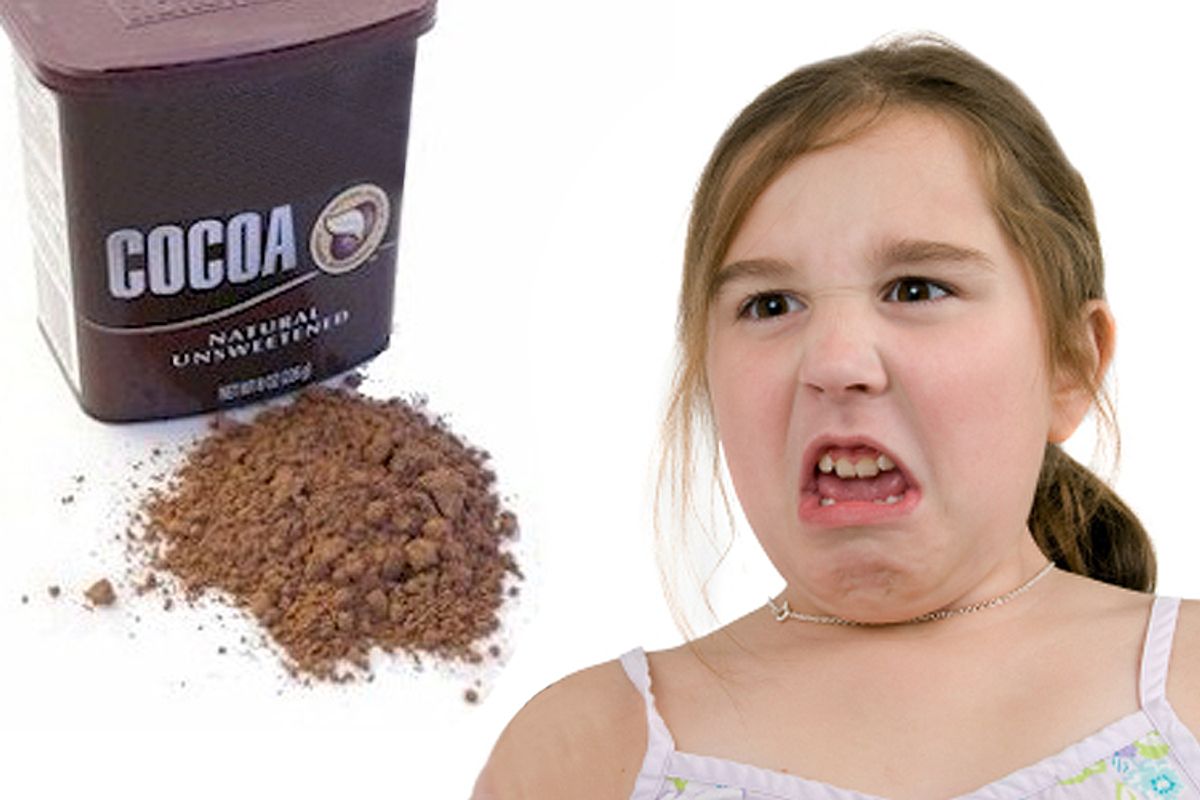 For a couple of weeks last year, we experimented with fascinating pills and powders that did weird things to our tongues. A fruit concentrate from Africa magically turned sour things sweet; a powdered herb from India blocked our ability to taste sweet things at all. More than just fun party tricks (I go to lame parties), they were fascinating lessons in how we perceive taste, and an important way to understand how we taste food.

Now, thanks to chemist/bartender/soda historian Darcy O'Neil (yes, that is what he does for a living and no, I don't know if he's single), I have my grubby little hands on another palate-modifier, a symbolic doozy for the new year: a bitter blocker. Technically known as Adenosine 5'-Monophosphate, it's a compound that promises to prevent me from ever knowing bitterly the bitter taste of bitterness ever again. No more tears, no more jealousy, just clear sailing. It's like an antidepressant for your tongue, only without the suicidal thoughts and libido issues.

But what is it about bitterness that is so, well, bitter? Our predilection for tastes and flavors is mainly learned (how many things do you love now that you used to hate?), and yet we mostly try to avoid bitterness; even the word itself is loaded with negative meaning. Just as researchers have posited that our love of sweetness comes from our bodies' understanding that it signals the presence of easy sugar calories, the prevailing thinking is that we also instinctively know that most toxins are bitter-tasting, so we know to stay away. (As one of my teachers in cooking school once said, "You are all the descendants of cavemen who knew not to eat the wrong thing.")

Yet, we enjoy plenty of things that are plenty bitter: chocolate, which we tame with sugar and sometimes milk. Coffee. Booze. And so what would it be like to be able to taste these things without their bitterness? Would they be unrecognizable? Would we like them more? Or would the taste balance be thrown all out of whack, and not in a good way?

Joining me in this little taste experiment were Nils Noren and Dave Arnold, the French Culinary Institute's SuperFriends of food technology, the men behind the super-geek-awesome Cooking Issues blog and the creators of flaming beer cocktails and ketchup that hardens and melts like chocolate. Deep in their lab, they are inventing new techniques that soon all your favorite chefs will be lining up to learn. Walking into their converted mop closet-cum-office, I spot a DVD sitting on Dave's desk. Discomfitingly, it's titled "America's Atomic Bomb Tests: Operation Tumbler Snapper (declassified June 1997)." Minutes later, I learned from him that if you try to Google "poisonous Thai" the autofill suggests "poisonous Thai transvestite gang." This, ladies and gentlemen, is where the future of what you'll be eating is born. Ahem. To the tasting, shall we?

We began by adding the AMP solution, one drop at a time, into Campari and other drinks, and Nils and I bravely fought reality to find any effect. "I think it tastes kinda different," isn't really a statement of ringing success, so I tried drinking a few drops in a splash of water. After another 45 minutes of false starts and saying goofy things like, "The attack of bitterness seems calmer, but it flares up in the back end, maybe on the receptors in the throat," I had enough of this foolishness. I emptied a full dropper of the stuff directly on my tongue, swishing it around and wondering if my epitaph writers would be kind enough to skip the part that I sound like a drowning gorilla when I gargle.

Dave gave me a test: a container of quinine solution, the stuff that makes tonic water so gnarly. To demonstrate its potency, he took a lick off his finger, and all of a sudden he's walking around in mad circles, furiously shaking his hands, as if trying to throw the taste off his body. He winced, and then brought it to a chef in the next room. The chef tasted it, unsuspecting, and he proceeded to look like a robot having a short circuit. I began to wonder how often people in this building grab their knives when Dave Arnold comes up to them and says, "Hey, taste this!"

"Here, now you try," he said to me with just the slightest hint of a sadist's sparkle. I steeled myself, getting ready to put the lotion in the basket. I did it. And I said, "That's fine." Dave looked at me in disbelief. He made me do it again. And again. And with each passing moment, I felt stronger. I AM INVINCIBLE! Like how a boy feels when he's in a raincoat and booties! Now give me things to taste!

Baking chocolate/cocoa powder: 100 percent baking chocolate suddenly tastes like hardly anything at all, and that's when I thought I realized that so much of chocolate's charms actually ride on the bitterness and the sugar; without those characteristics, it tastes mainly like ... dirt. Kinda stale dirt. Dirt that's been sitting around for a while ... wait a minute, this is just bad chocolate! Dave took a deep whiff out of the box and immediately left the room. He came back a minute later with some plain cocoa powder, nice stuff, and we taste that. Magic! Like nuts, toasted nuts, deep and rich, like a driving bass line. It doesn't have the high, fruity flavors of really nice chocolate, but it's surprising how much flavor cocoa powder can have, when usually I just think of it as a pale shadow of chocolate. Well, that's a lie. Mainly I just think of cocoa powder as something you break out when you want to get all your clothes stained. So it's surprising that it can have so many varied, compelling flavors once you see beyond the bitterness. Also surprising is the fact that a box of chocolate so stale it could have come back with Columbus can be found in one of the finest culinary schools in the country. But maybe they got it out of the school's museum.

Grapefruit: When I was a kid, I remember my mom putting half of a grapefruit in front of me because I was finally old enough to enjoy it like an adult and ... I broke her heart. It was disgusting, the flavor of a poisoned orange, and it would be decades before I actually came to enjoy it. (Especially with a little shake of sugar and a blowtorch to caramelize it.) But today this … this THING! IS HORRIFYINGLY SOUR! Shake-your-head sour. Which is really weird, because before the AMP kicked in, it was sweet and pleasant. But without the grounding foundation of bitterness, the acidity just flies off the charts. Lesson: If food is too bitter, maybe some citrus or acid will help curb it. Also, while we're talking about kids eating grapefruit:

Beer (Stoudt's Pils, for you keeping score at home): To be honest, I'm not really the biggest fan of hoppy beers, and so at first, this one tasted exactly like the kind of thing I would try to avoid embarrassing myself with around my beer-geek friends. A thoughtful nod and pensive silence can get you out of all kinds of trouble. "It's interesting." But no, I'm not really interested because it makes me grit my teeth. With my palate shielded from bitterness, though, now I can find all kinds of things to like about this beer: it's savory taste, a quality of umami, with a tiny tart tang and the flavor of wheat and minerals. Maybe I should carry a bottle of AMP to the bar with me next time.

Bread, burnt to holy hell: This is kind of amazing. I normally run from burnt toast like it's waving a knife in my face, the acrid taste of charred bread being one I can't even humor. But now, even though this bread has been utterly charcoalized on the outside, it's totally palatable. In fact, it doesn't taste much different from normal toast, and I think that means that all the complex flavor changes -- the caramelization, the browning -- stop happening as you go from "toasted" to "burnt." Except, of course, that burning produces bitter compounds.

Orange peel: By now, I'm feeling great about my tongue of steel. A great chef once said to me, "Everyone says orange peel is bitter, and so everyone avoids it. But have you ever actually eaten an orange peel?" I said no, not other than a little bit of the zest that you shave off. "See?" he said. "You have only listened to others, but not tried it yourself." Well, today, emboldened, I ate that orange peel, chef. I chewed it up and ... I spit it out. Which was tame, because really what I wanted to do was punch out a window, claw out my tongue, and chop down an orange tree for good measure. It was unpleasant, and not just because my entire head suddenly smelled like an orange. The bitterness was awful. "What happened?" I asked, falling like Superman before some stupid green rock.

"I wonder if it only works with certain bitter compounds," Dave said. "You know, we have like 50 different kinds of bitter receptors." Good God, man, now you tell me! I felt like Achilles, on his deathbed, going, "Hey, great job on that whole heel thing, Ma."

But now recovered, I wonder if that doesn't actually make sense, according to the toxin-detector theory of bitter receptors. It is the taste we are most sensitive to. You might not even be able to taste a single grain of sugar on your tongue, but ingesting the same amount of toxin would have your palate screaming signals at your brain, because it could probably kill you. If it doesn't make you feel like you want to die first.