John Boehner on gun control reform: Not under my gavel

Guns are more profitable than ever, and -- no matter what Bloomberg says -- GOP leaders won't back reform 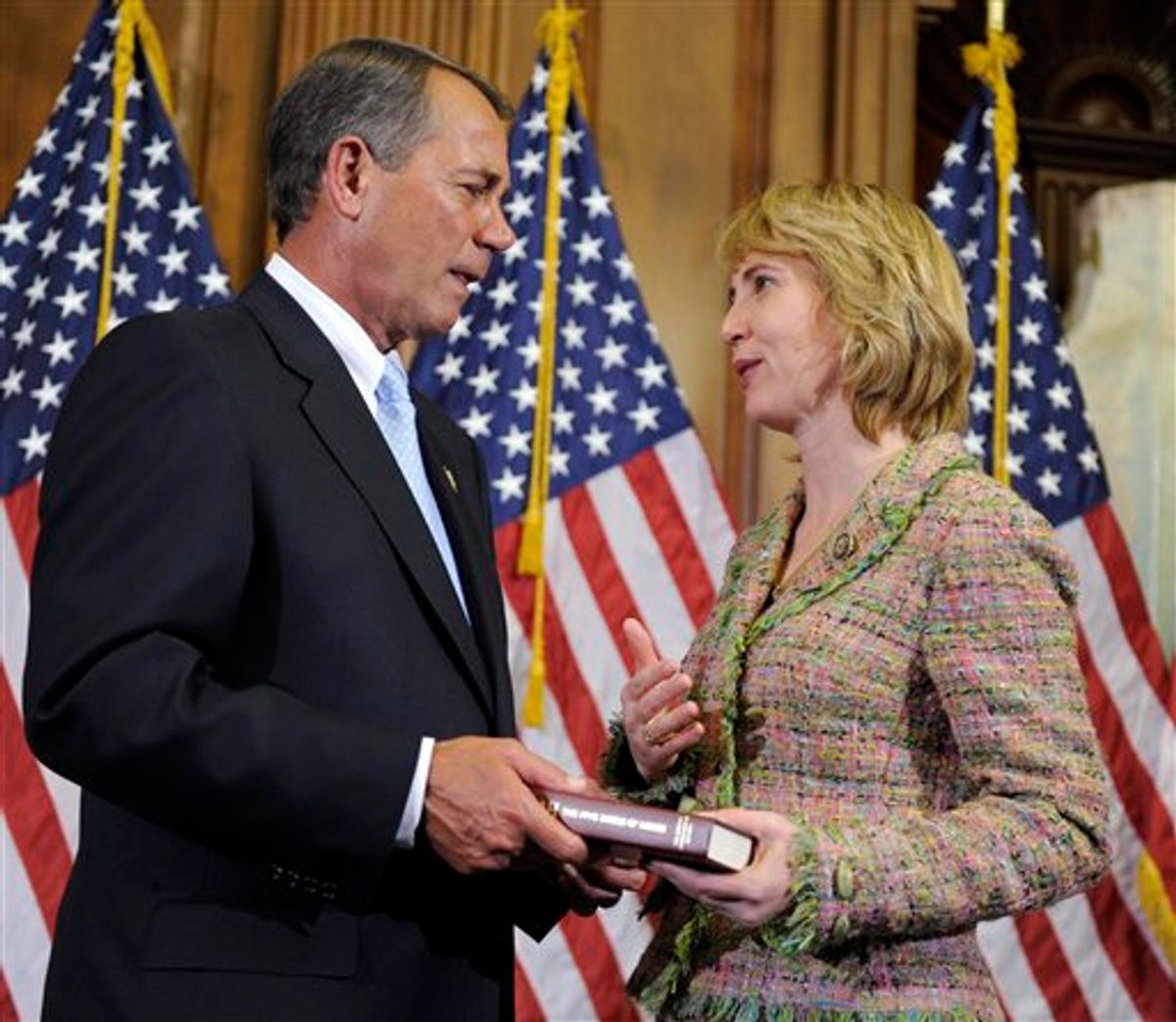 FILE - In a Jan. 5, 2011 file photo, House Speaker John Boehner of Ohio reenacts the swearing in of Rep. Gabrielle Giffords, D-Ariz., on Capitol Hill in Washington. She loves motorcycles and yoga, and is as comfortable in a business suit walking the halls of Congress as she is clad in leather riding gear at the famed Sturgis Motorcycle Rally. She holds a master's degree in urban planning, yet can mount a tire in a flash. Pretty and petite, sometimes soft-spoken, she will take on even her most ardent adversaries and try talking them down with a firm hand but also a smile. Said one friend of Gabrielle Giffords: "She really pretty much defies a lot of description." (AP Photo/Susan Walsh, File) (AP)
--

The new Speaker of the House seems predictably dismissive about upcoming gun control legislation. Despite the fact that a young man sprayed bullets from a Glock with a once-banned illegal weapon into a crowd killing children, federal employees and severly wounding Rep. Gabrielle Giffords, John Boehner is pushing back against non-NRA-friendly laws.

As perhaps the only Republican Member of Congress championing gun control, King's planned legislation would make it illegal to carry a gun within 1,000 feet of a government official.  Boehner will not support the legislation says spokesperson, Michael Steele.

So what gives, John? Even Eric Cantor taking a little time to think about this one -- believing "it's appropriate to adequately review and actually read legislation before forming an opinion about it” according to The Hill.

Here are a few key facts about guns and gun control in the context of the Giffords shooting:

And it's not just the Republicans steering the conversation on Capitol Hill. Sen. Joe Manchin, a Democrat from West Virginia, won his seat after running an ad in which he fires a bullet through federal legislation. Literally:

In a statement released after the shootings, Manchin sums up perfectly the Second Amendment paradox:

We should not group law-abiding Americans who own guns -- and who have the right to own guns -- with a deranged madman.

This is the old saying about how guns don't kill people, people kill people. (Also, bullets.) But is this just a chicken and egg conversation? Until the country gets better at identifying and treating mental health, it may be tough to single out the madmen from the crowd of regular law-abiding Americans.