Why feminism was good for marriage 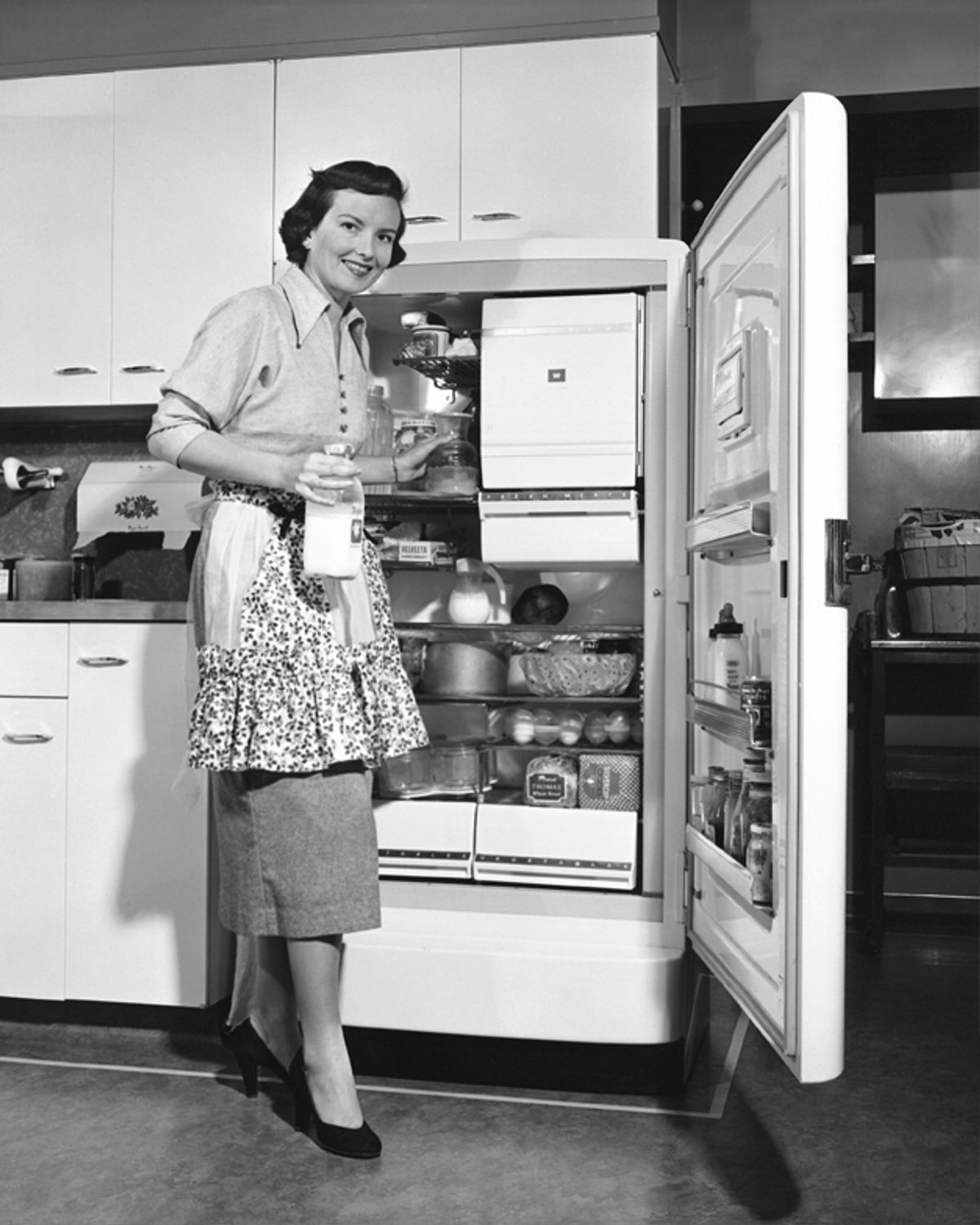 Believe it or not, Betty Friedan was a romantic. The author of the groundbreaking 1960s treatise "The Feminine Mystique" may have detested certain traditional values, but she clung to the fantasy of heterosexual love and marriage -- here's the key -- among equals. In fact, Friedan once said that her tombstone should read: "She helped make women feel better about being women and therefore better able to freely and fully love men" -- and yet she had been memorialized by many as anti-male and anti-marriage.

These are just a few of the untruths that historian Stephanie Coontz exposes in her new book, "A Strange Stirring: The Feminine Mystique and American Women at the Dawn of the 1960s." It is essentially a book about a book -- but it's actually far more interesting than that sounds. She takes us back to the 1920s to illustrate the disappointment and yearning that led to "The Feminine Mystique," then to the release of the book in 1963 and, through nearly 200 interviews with women and men who read Friedan's book when it was first published, Coontz explores why it had such a profound impact on the so-called Greatest Generation. It was such a pervasive cultural influence that many, including Coontz herself, believed that they had read the book, even though they had never actually cracked the cover.

"A Strange Stirring" gives voice to women whose lives were transformed by Friedan's book, but most compellingly, it sets the historical record straight as far as its impact on families. Coontz, the author of "Marriage, a History," uses data available today to show that the changes Friedan and other feminists of her time agitated for have actually been good for marriage. The divorce rate has fallen and actually tends "to be lowest in states where more than 70 percent of married women work outside the home," she reports. What's more, "The specialization into separate gender roles that supposedly stabilized marriages in the 1950s and 1960s actually raises the risk of divorce today." As for happiness in the marital bed: "Whether a woman is a homemaker or works a paid job -- part-time, full-time, or even more than full-time -- does not affect the couple's sexual satisfaction or the frequency of sex. But job satisfaction does."

Salon spoke with Coontz by phone from her home in Olympia, Wash., where she teaches history and family studies at the Evergreen State College, about the decline of the "feminine mystique" and the new mythologies that have replaced it.

How has marriage changed since "The Feminine Mystique" was published?

I went back and actually looked at the marriage advice books, what psychologists were telling women and what women expected of themselves. I was stunned by the contrast. Less than 50 years ago, just a month before an excerpt from "The Feminine Mystique" was first published in Lady's Home Journal, the Saturday Evening Post did a big Gallup interview of housewives and they said over and over again, "A woman needs a master-slave relationship, the man must be the boss." And the experts said if there's something wrong in the marriage, ask yourself what you did to contribute to it.

So, marriage has become much fairer. It's also become much more satisfying for men and women, when it works. On the other hand, there's a lot less support for the new model of marriage -- which is that women as well as men should be breadwinners, and that men as well as women should be nurturers. Our whole political system, job structures and social expectations around work are based on the idea that the person who works will be totally available and will have someone else to take care of obligations. So, women end up trying to go back and forth between the roles, and men don't really get access to both.

Men consistently report in interviews, and I've certainly heard them tell me in focus groups, that on the one hand they see the kind of pressure that their wives are under to be everything -- super-achiever wives and mothers at the same time. For men, though, the pressure is often the opposite. They will often pretend that they have a doctor's appointment rather than say to the boss, "I have to leave on time," or "I have to leave early because it's my turn to be with the kids." That tends to devalue them in the workplace.

I think it's important to note that women are no longer doing the "double day of work." They're putting in a few more hours than men are, but it's no longer a "double day." Men have really stepped up to the plate at home, but our employers and our work system has not stepped up to the plate to make it possible for a man to be a worker without having a full-time wife. Both men and women are spread really, really thin.

That may speak to this question: What are the "mystiques" of this current age?

There are two new "feminine mystiques." I don't think they're as pervasive as the old, but they can be dangerous. One of them kicks in during the teen years, and that's what I call "the hottie mystique." The idea is that young women have to not only achieve in ways you were never expected to achieve before, but to compensate for that achievement they must show that they are completely hot, sexual and desirable. I think a lot of women grow out of it, but it can really derail some youngsters.

The other mystique, of course, is one that has been described by people like Judith Warner [in her book "Perfect Madness"], and that is "the motherhood mystique." The idea is that you have to be there constantly to do everything for your kid. I think that's been accelerated by our economic problems. As the gap between rich and poor has widened, and the middle class has hollowed out, parents are ever more concerned that their kids won't do as well as they did. I think moms in particular feel this tremendous pressure to make every moment a teachable moment and get them into all the things that will help them succeed.

For men, you still have the old-fashioned "masculine mystique" that says you must be tough, strong and the provider. Finally, [for both sexes] there is the "career mystique," the idea that a real career has got to be full-time and year-round -- particularly during the period when you are young and climbing up the job ladder, which is exactly the period when you're forming your family. What's wrong with the "career mystique" is that you prove yourself by being the last one to leave the office. It's the flip side of the "feminine mystique," and it can only work as long as you do have one-half of the population that is taking care of the careerist. It doesn't work if we're both interested in having careers and having families.

Looking forward, how can we expect marriage to change?

For reasons other than feminism, and other than Betty Friedan, marriage has become more optional. It used to perpetuate inequality, but it used to also be an economic and political arrangement. It was the only way that a woman could find economic security. It was the only way that a man could achieve political and economic respectability. Back in 1964, Rockefeller couldn't run for president because he'd been divorced. Unmarried men were often denied promotions and bank loans. People were funneled into marriage and kept there by a whole set of economic, cultural and political practices.

As women have gained the economic clout to leave a marriage, they have demanded divorce. They have become more reluctant to enter a marriage unless it is one that lives up to their satisfactions. A lot of people say that we expect too much from marriage right now, and that may be partially true, but, gosh, you go back to the marriages of the 1950s and '60s and how little they expected of them and I don't think anybody in their right mind, certainly not a woman, would want to go back to the low-expectation marriage.

Looking back now, what did Friedan get wrong?

She got a lot of things wrong. People generally critique her for not addressing herself to African-American women, and that’s really true. She also had an elitist approach to work and didn't really recognize that working-class women could take pride in their job. She had a lot of the same prejudices of her era, even though she turned them upside down. She had the same prejudices against homosexuality, and she perpetuated the same female-blaming that was going on in pop culture -- that women were nagging their husbands and smothering their kids -- only, she turned it on its head and said it was because they weren't allowed to have other aspirations.

What do you make of claims that these very changes have prompted a "masculinity crisis"?

People have been proclaiming a "masculinity crisis" since the 1890s and, actually, it's very interesting that when you go back to the 1940s and '50s, a lot of the vitriol directed at women was because they thought there was a "masculinity crisis" at that time. The idea was that domineering women in the home were expecting too much of their husbands and were driving them to work too many hours.

I think what we're facing now is that men are in fact struggling to take on new roles; many men have begun to really increase their sense of themselves as family members. They're discovering new meaning in their lives in the same way women have, but in the opposite direction -- they're adding family. On the other hand, there has not been the same type of cultural revolution for men that women have had, one that says, "It's OK if you want to do this even more than your old role." That's still not acceptable for men. They're still being given the message that they must be the main provider, and the strong, protective one who can get rid of the mouse -- but they're also being told that they have to be sensitive and nurturing. There have been improvements, but we haven't yet gotten a new culture of manhood in place.