Salon vs. Salon: Violence and the political climate 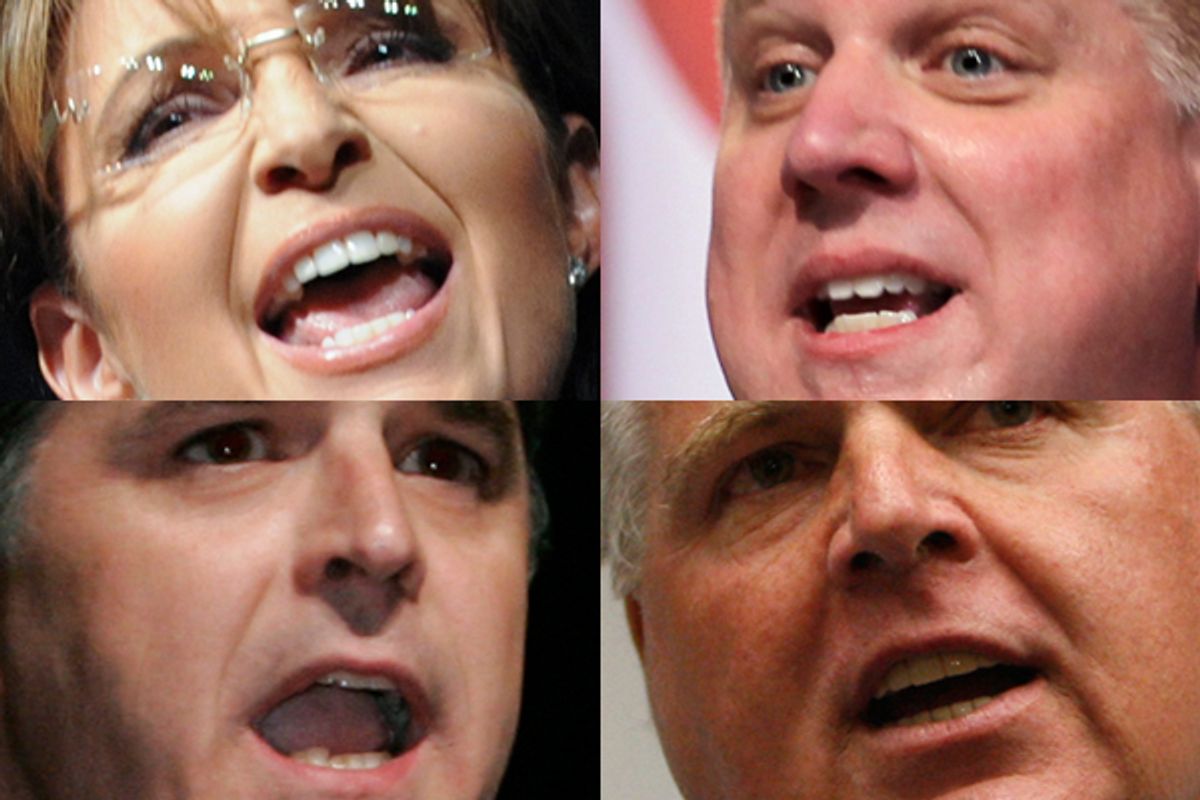 Everyone understands that Jared Loughner, the 22-year-old who tried to assassinate Gabrielle Giffords over the weekend (and who did kill six others), is a madman -- and that he is the sole person directly responsible for the carnage in Tucson, Ariz. But a debate has sprung up over whether some right-wing leaders may have, through overheated rhetoric and antics these past few years, helped create a climate that tipped Loughner over the edge.

Alex Pareene, a senior writer at Salon, believes there may be something to this; Steve Kornacki, Salon's politics editor, sees it as a backdoor effort by some on the left to attach blame to Sarah Palin and the Tea Party without any meaningful evidence. They discussed their clashing interpretations in an instant messenger conversation.

Steve Kornacki: So ... our commenters seem a lot happier with you this week than with me. Which I understand: Like I wrote, my instinct last Saturday was to assume this was the work of a Tea Partyer. But clearly, it wasn't. And I've seen no evidence that there's any kind of connection -- direct or indirect -- between Jared Loughner's actions and the rhetoric of the right. So I just sort of wonder: Why are we all suddenly talking so much about Tea Party rhetoric? I mean, it's an awful coincidence that the congresswoman whose district was framed by cross hairs on Palin's site has been shot -- but it really does look like it is just a coincidence. Claiming the political environment made it more likely that Loughner would do this just feels slippery to me -- a backdoor way for columnists to write the "Now you've really done it, Sarah!" pieces that they were all mentally preparing Saturday afternoon.

Alex Pareene: Yeah, he's no Tea Partyer. He's a complete nut. It's silly to obsess over "tone," as if arguing on TV caused this. Cross hairs on a map is rude, but didn't lead directly to this. But there are hints of far-right rhetoric in Loughner's Internet trail. In addition to the passing mention in his YouTube videos of currency backed by gold or silver, he was said to have gone off on "a rant about the Constitution" at his school. There are varieties of far-right extremist belief that seriously appeal to, shall we say, troubled young men convinced of their own intellectual superiority. That's the Ayn Rand demographic, basically.

This is just sort of listening for echoes of understandable rhetoric in the ravings of a madman, and there's no politician or media person who should be held personally responsible for any of this guy's crimes, but the direction his madness took was inspired by something. There's a reason he was fixated on the illegitimacy of the government, there's a reason he was fixated on his member of Congress, there's a reason he decided to shoot her instead of, say, shooting up the community college that kicked him out. I think it's likely he was drawn to some of the really nutty, out-there kind of individual sovereignty stuff, and I also think that the fact that there's been so much intense media noise concerning the supposed illegitimacy of the federal government over the last couple years probably had an effect on this guy's obsessions.

S.K.: I'll be ready to go down that road when I see some clear evidence. Right now, I've been most struck by the Mother Jones interview with Loughner's (only?) friend, who said that Loughner's vendetta against Giffords seemed to begin when he approached her at an event in 2007 and asked, "What is government if words have no meaning?" Not surprisingly, Giffords apparently had no idea what he was talking about and blew him off, which enraged him. I don't see any signs of Tea Party/Ayn Rand influence in that question; it seems to refer to a theory being pushed by a crackpot whom the New York Times tracked down the other day. He's just a random nut who has a bizarre, incomprehensible theory about the government controlling grammar. And apparently, his ideas excited Loughner.

I suspect that's the level of what we're dealing with here. It seems to me that so much of the commentary about this just assumes that Loughner perceived the political culture like we all do -- or that he was even aware of it. But his friend is talking about his obsession with lucid dreaming and grammar. I wonder if he even recognized the term "Tea Party."

A.P.: Right, it's totally correct to say we need to have evidence before we start definitively saying Loughner was inspired by this or that. His epiphany that words have no meaning, and that grammar controls thinking, is classic stoner logic. Honestly, he was probably inspired by "The Matrix" and "Inception" more than anything else, when it came to his odd philosophy. But Rand's "We the Living" was on his book list. It's the story of "the individual against the state," according to Ayn, and it's not really a book that lefties read. Heavy metal and Objectivism didn't make this guy kill.

But I think it's reasonable and maybe even necessary to look at the culture as a whole and try to see what sort of threads a guy like this picked up on. I think Loughner didn't listen to talk radio or watch 24-hour cable news networks or read Daily Kos or Michelle Malkin, but there are a million Alex Jones-y corners of the Internet where people with bizarre beliefs congregate -- he was apparently a regular on a UFO forum, which is nonpartisan but speaks to anti-government conspiratorial tendencies -- and I would be shocked if he wasn't exposed to some bizarre far-right rhetoric that shaped his thinking. (And that language nut from the Times is popular in the Sovereign Citizen anti-tax movement, for his argument that the government has no authority over people who are prepositional phrases.)

It's more complicated than any dumb cable news segment, because it's not "mean language caused murder," but the fact that extremist right-wing rhetoric, which hasn't been this prominent or mainstream in years, has already had violent consequences, so it is reasonable to ask if it had any effect here.

S.K.: Yes, reasonable to ask. But don't you feel that some (a lot?) of the commentary has demonstrated an eagerness to force the connection? To start with the conclusion that this is tied to violent right-wing rhetoric, and then to work backward looking for supporting evidence? I have friends who in the late '90s bristled at the idea that the content of music/video games/television/movies could inspire kids to kill -- and who are now pointing their fingers at the Tea Party.

A.P.: Oh, sure. I think that's basically because a lot of commentary about any major event tends to be simplistic and misguided. The "video games cause violence" argument is facile, but I would entertain complex arguments about video games and their relationship to America's gun culture, or something. Some people are working backward trying to force a connection, and while I'd be fairly infuriated by that if I were a right-winger, there hasn't been much introspection about why so many people immediately connected this to right-wing rhetoric. I don't think most of the people making the connection are doing it out of a cynical desire to score partisan points; I think they sincerely believe that violent eliminationist rhetoric is dangerous. (Not that good intentions are a good defense for bad analysis.)

S.K.: I said to someone earlier today that in one obvious way, this is the best time to have a discussion about how inflamed political rhetoric may influence our society, but that in another way, it's also the worst.

A.P.: Yeah, totally. It's depressing how quickly people went into "rapid response" mode, and once that happens, there's no talking about anything without people assuming bad faith. I mean, my basic point has been, a lot of really, really crazy, irresponsible stuff has been said, and serious conservatives respond either by screeching about how I want to censor everyone or by saying, "Well, they started it." Press release from the in box: "RADICAL LEFTIST PUNK BAND INSPIRED ACCUSED GUNMAN."

S.K.: Ha. Well, like you said, I kind of get their frustration at this point. It looks like Loughner isn't anything like what just about everyone on the left first assumed he was -- but liberal commentators and liberal sites are still using the occasion to trot out every gun/war/revolution-themed utterance from Palin et al. Maybe some are doing this out of a heartfelt desire to tame the political climate, but I can see why the right would take umbrage. It does feel like a slippery way of saying, "The Tea Party didn't cause this -- but really, it did."

I guess my main point is that it's entirely possible that, as out there as it has been at times,  the right's rhetoric and tactics had absolutely no direct or indirect role in what happened on Saturday. And -- for now -- I haven't seen any compelling evidence that suggests otherwise.

A.P.: Right. Well, I can't argue with that. My main point is simply that people -- even crazy, incomprehensible people -- are products of the culture. It's foolish to try to definitively prove a direct link, and as you say there's absolutely no evidence for Loughner having anything resembling conservative principles as they're generally understood, but we're all shaped by media and environment. (In other words, I totally blame Anti-Flag, just like the guy from WND.com who is available for interviews.)