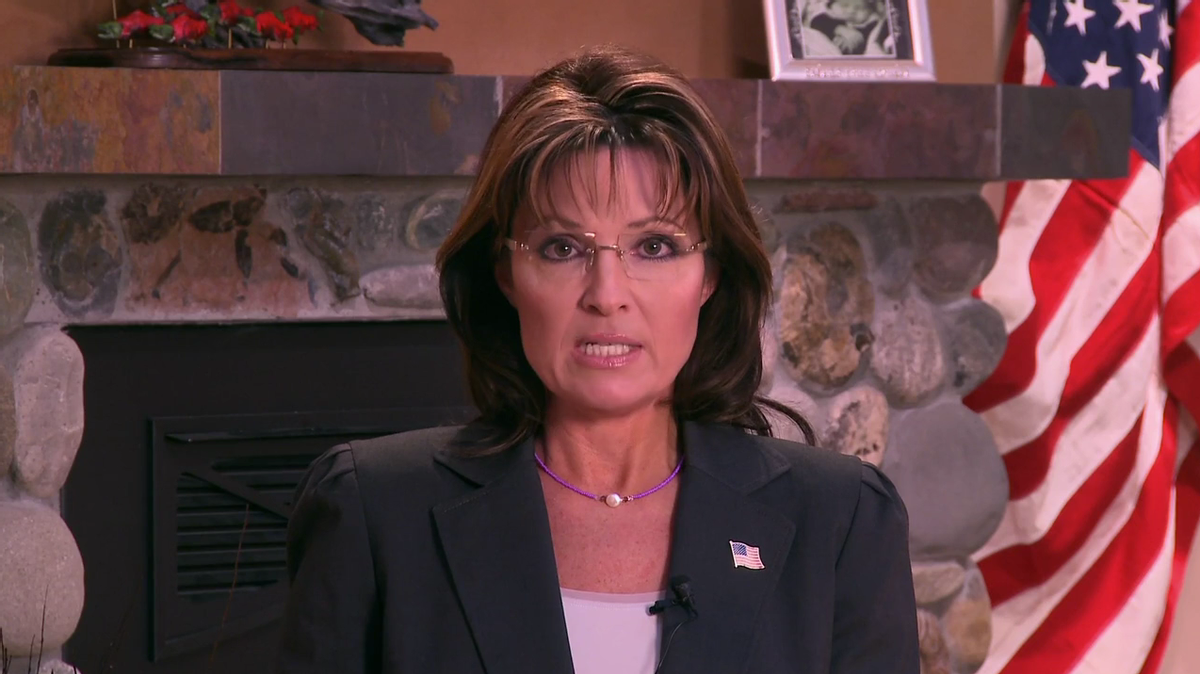 Palin posted an 8-minute video to Facebook the Wednesday morning after the shootings.
--

Salon's own Steve Kornacki explains that "This is why Palin '12 just won't work:"

Memo to conservative morons: there's a perfectly good all-American term to express your perpetual feeling of victimhood. It's called "waving the bloody shirt."

Adam Serwer goes in depth on "The foolishness of the 'blood libel' charge:"

"Blood libel" is not wrongfully assigning guilt to an individual for murder, but rather assigning guilt collectively to an entire group of people and then using it to justify violence against them.

This is a new low for Palin, but outsize comparisons of partisan political conflict to instances of terrible historical oppression is a fairly frequent rhetorical device among conservative media figures.

Jonah Goldberg, similarly, on the attempt to coopt a very old (and loaded) phrase:

I should have said this a few days ago, when my friend Glenn Reynolds introduced the term to this debate. But I think that the use of this particular term in this context isn’t ideal. Historically, the term is almost invariably used to describe anti-Semitic myths about how Jews use blood — usually from children — in their rituals. I agree entirely with Glenn’s, and now Palin’s, larger point. But I’m not sure either of them intended to redefine the phrase, or that they should have.

Today has been set aside to honor the victims of the Tucson massacre. And Sarah Palin has apparently decided she's one of them.

Dave Weigel reacted somewhat light-heartedly at first via Twitter but then speculates about what Sarah was up to in between Saturday and today in his early morning post:

It's the other part, that the coverage of Palin served "to incite the very hatred and violence" that liberal pundits were condemning. She doesn't say it, but I assume Palin got angry or hateful e-mails, and possibly some death threats, in the wake of the shooting.

After nearly a week of silence and waves of bad press, Sarah Palin finally speaks. To Facebook.

Since journalists and pundits are manufacturing "blood libel," the former Alaskan governer must want to speak directly to the people. However, as The Guardian points out, she probably could've picked a better phrase to describe the media's unified attack against her use of violent rhetoric -- most notably putting Giffords in the crosshairs on a campaign poster distributed before the shootings.

"Blood libel" according to Wikipedia:

Blood libel (also blood accusation) refers to a false accusation or claim that religious minorities, almost always Jews, murder children to use their blood in certain aspects of their religious rituals and holidays. Historically, these claims have–alongside those of well poisoning and host desecration–been a major theme in European persecution of Jews.

UPDATE: Palin has also posted the video's transcript on Facebook:

Like millions of Americans I learned of the tragic events in Arizona on Saturday, and my heart broke for the innocent victims. No words can fill the hole left by the death of an innocent, but we do mourn for the victims’ families as we express our sympathy.

I agree with the sentiments shared yesterday at the beautiful Catholic mass held in honor of the victims. The mass will hopefully help begin a healing process for the families touched by this tragedy and for our country.

Our exceptional nation, so vibrant with ideas and the passionate exchange and debate of ideas, is a light to the rest of the world. Congresswoman Giffords and her constituents were exercising their right to exchange ideas that day, to celebrate our Republic’s core values and peacefully assemble to petition our government. It’s inexcusable and incomprehensible why a single evil man took the lives of peaceful citizens that day.

There is a bittersweet irony that the strength of the American spirit shines brightest in times of tragedy. We saw that in Arizona. We saw the tenacity of those clinging to life, the compassion of those who kept the victims alive, and the heroism of those who overpowered a deranged gunman.

Like many, I’ve spent the past few days reflecting on what happened and praying for guidance. After this shocking tragedy, I listened at first puzzled, then with concern, and now with sadness, to the irresponsible statements from people attempting to apportion blame for this terrible event.

President Reagan said, “We must reject the idea that every time a law’s broken, society is guilty rather than the lawbreaker. It is time to restore the American precept that each individual is accountable for his actions.” Acts of monstrous criminality stand on their own. They begin and end with the criminals who commit them, not collectively with all the citizens of a state, not with those who listen to talk radio, not with maps of swing districts used by both sides of the aisle, not with law-abiding citizens who respectfully exercise their First Amendment rights at campaign rallies, not with those who proudly voted in the last election.

The last election was all about taking responsibility for our country’s future. President Obama and I may not agree on everything, but I know he would join me in affirming the health of our democratic process. Two years ago his party was victorious. Last November, the other party won. In both elections the will of the American people was heard, and the peaceful transition of power proved yet again the enduring strength of our Republic.

Vigorous and spirited public debates during elections are among our most cherished traditions. And after the election, we shake hands and get back to work, and often both sides find common ground back in D.C. and elsewhere. If you don’t like a person’s vision for the country, you’re free to debate that vision. If you don’t like their ideas, you’re free to propose better ideas. But, especially within hours of a tragedy unfolding, journalists and pundits should not manufacture a blood libel that serves only to incite the very hatred and violence they purport to condemn. That is reprehensible.

There are those who claim political rhetoric is to blame for the despicable act of this deranged, apparently apolitical criminal. And they claim political debate has somehow gotten more heated just recently. But when was it less heated? Back in those “calm days” when political figures literally settled their differences with dueling pistols? In an ideal world all discourse would be civil and all disagreements cordial. But our Founding Fathers knew they weren’t designing a system for perfect men and women. If men and women were angels, there would be no need for government. Our Founders’ genius was to design a system that helped settle the inevitable conflicts caused by our imperfect passions in civil ways. So, we must condemn violence if our Republic is to endure.

As I said while campaigning for others last March in Arizona during a very heated primary race, “We know violence isn’t the answer. When we ‘take up our arms’, we’re talking about our vote.” Yes, our debates are full of passion, but we settle our political differences respectfully at the ballot box – as we did just two months ago, and as our Republic enables us to do again in the next election, and the next. That’s who we are as Americans and how we were meant to be. Public discourse and debate isn’t a sign of crisis, but of our enduring strength. It is part of why America is exceptional.

No one should be deterred from speaking up and speaking out in peaceful dissent, and we certainly must not be deterred by those who embrace evil and call it good. And we will not be stopped from celebrating the greatness of our country and our foundational freedoms by those who mock its greatness by being intolerant of differing opinion and seeking to muzzle dissent with shrill cries of imagined insults.

Just days before she was shot, Congresswoman Giffords read the First Amendment on the floor of the House. It was a beautiful moment and more than simply “symbolic,” as some claim, to have the Constitution read by our Congress. I am confident she knew that reading our sacred charter of liberty was more than just “symbolic.” But less than a week after Congresswoman Giffords reaffirmed our protected freedoms, another member of Congress announced that he would propose a law that would criminalize speech he found offensive.

It is in the hour when our values are challenged that we must remain resolved to protect those values. Recall how the events of 9-11 challenged our values and we had to fight the tendency to trade our freedoms for perceived security. And so it is today.

Let us honor those precious lives cut short in Tucson by praying for them and their families and by cherishing their memories. Let us pray for the full recovery of the wounded. And let us pray for our country. In times like this we need God’s guidance and the peace He provides. We need strength to not let the random acts of a criminal turn us against ourselves, or weaken our solid foundation, or provide a pretext to stifle debate.

America must be stronger than the evil we saw displayed last week. We are better than the mindless finger-pointing we endured in the wake of the tragedy. We will come out of this stronger and more united in our desire to peacefully engage in the great debates of our time, to respectfully embrace our differences in a positive manner, and to unite in the knowledge that, though our ideas may be different, we must all strive for a better future for our country. May God bless America.