The Minnesota governor's new book slams the bailouts of 2008, but at the time he was striking a very different tone 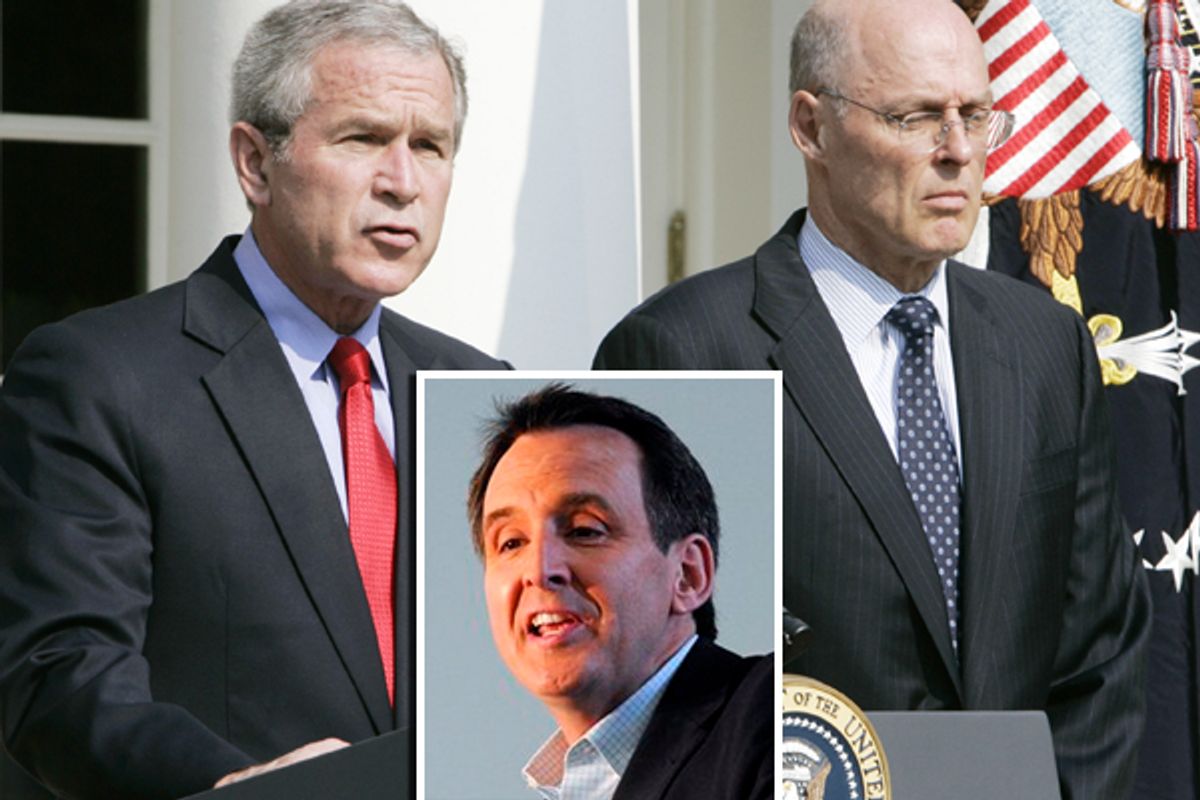 Former Minnesota Governor Tim Pawlenty is expected to run for president, and part of that is writing a campaign autobiography. And part of that, if you're going to vie for GOP primary support in 2012, is slamming the bailouts of 2008.

Thus, just a few pages into Pawlenty's new "Courage to Stand: An American Story," he starts after TARP, metaphors blazing:

When the rain started to fall on America's picnic, Washington hung up a big old plastic tarp to protect us from the deluge. (Ever wonder why they call some of these things "TARP funds"?] Good intentions? Maybe. But a bad decision. The problem was, the rain just kept coming. The tarp started sagging in the middle and filling up with water. Poke it with a broom handle all you want, try to drain some of that rainwater over the sides, but the blanket below is getting awfully wet in the meantime. Everyone can see the tarp's starting to tear at the seams, and we've run out of duct tape. This whole thing's going to collapse-and the picnic will simply be over. Time for a new plan.

The bailouts come in for a lot more abuse throughout the book (sample: "folks at the top get a bailout, and the rest of us get our wallets out.")

But here's the thing. Pawlenty was already a national figure around when these bailouts were passing through Congress at the urging of the Bush administration. As Minnesota governor he had the luxury of not having to actually cast a vote in Congress on TARP in October 2008. But Pawlenty was making the national media rounds as a surrogate (and potential vice presidential pick) for John McCain.

I've reviewed the transcripts of Pawlenty's statements on the bailouts in that summer and fall, and it's clear he was careful, when he was voicing support for the measures, to frame the statements as what McCain believed. But still, he was hardly railing against the bailouts the way he is now. If anything, he was voicing reluctant support.

At the time, Pawlently's public statements were so mealy-mouthed, that U.S. News &World Report writer Jim Pethokoukis even rendered his position on TARP this way on Sept. 26: "Pawlenty says he is reluctantly for it."

Here's an exchange that Pawlenty had with Matt Lauer in mid-September regarding the $85 billion bailout of AIG, a couple weeks before TARP passed:

MR. LAUER: Governor Pawlenty, yesterday on our program, your presidential candidate, John McCain, said he did not think the government should bail out AIG. The government did. Did he get it wrong? Did he not understand it?

GOV. PAWLENTY: Well, certainly Senator McCain doesn't support the bailout of AIG in a philosophical or ideal level, Matt. But as you look at the practicalities or the implications of letting AIG fail in terms of what it would mean to average citizens and the destabilizing of the credit markets and the financial markets, something needed to be done. So he's willing to at least look at these kinds of options.

MR. LAUER: Well, wait a second. He did not think it should happen. So did he not understand the impact that AIG's failing would have on those average citizens you just talked about?

GOV. PAWLENTY: Well, I think he does understand it. He doesn't -- like he said yesterday, he doesn't support the bailout, but he also understands that something needed to be done to try to minimize or mitigate the consequences of these kinds of institutions crashing.

"Something needed to be done" -- those are hardly the words of an anti-bailout crusader.

And here's Pawlenty on August 6, 2008, at an event at the National Press Club:

MODERATOR: Another questioner asks, "How can you be such an advocate of marketplace economics when airlines, banks, and trillion- dollar mortgage insurers like Fannie Mae and Freddie Mac are in need of rescue by the American taxpayer?"

But markets are imperfect, but they self-correct. And so in an ideal marketplace, you'd allow those entities to fail. But if you allow those entities to fail, the consequences are so severe for innocent bystanders, namely average Americans who rely on the markets, rely on those mortgages, you know, the consequences are too severe.

So from a pure marketplace principle, you would not bail them out. But we also have to measure that against the consequences to the rest of the country. And, you know, that is an imperfect solution, but, like has been said, they are too big, the consequences are too severe for innocent bystanders to allow them to fail. So it's an imperfect solution, but you also have to be pragmatic about getting the mess cleaned up.

Those entities, in my opinion, should have been privatized a long time ago. You know, Fannie Mae and Freddie Mac have served a good purpose and a good role, but they basically privatized the gain and made public the losses.

Again, that's pretty much a statement of reluctant support for bailouts on practical grounds.

Look for Pawlenty's shift on bailouts to come up in the GOP primary, with a potential candidate like Mike Huckabee (also not in Congress at the time) touting his early and vocal opposition to TARP.