Fanning the flames of paranoia 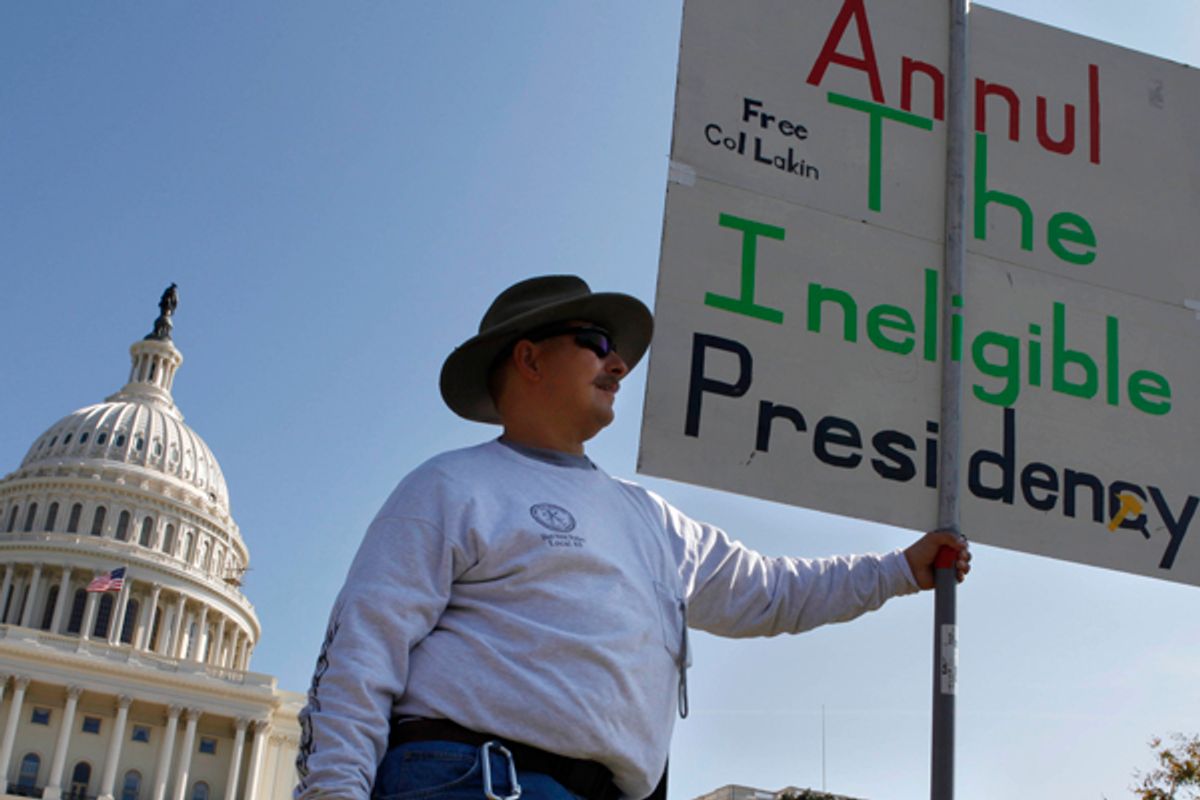 Like everyone else, in the wake of the killings in Tucson, Ariz., I've been thinking about paranoia. I have worked with the disorder for the whole of my psychiatric career. Early in my residency, at Yale, I was identified as "good with paranoids." I doubt that I began with any special talent. The claim that I did allowed colleagues during residency to avoid these patients and send them my way.

Diagnosis was less critical then, 30-odd years back, but the people I treated probably had paranoid schizophrenia, bipolarity and what is now called delusional disorder, formerly paranoia. My favorite was an annoyed and critical woman who said that CIA agents had damaged her car ignition and then followed her everywhere on the bus, so that she could not travel to see me -- and why should she, since I was probably part of the conspiracy? When the Blizzard of 1978 swept through New England, I was held over at the Connecticut Mental Health Center -- actually, I had managed briefly to get away and had used cross-country skis to return on the empty New Haven streets. At her appointment time, there, all alone, was my beleaguered patient, sitting on the molded Eames chair in the darkened hallway, waiting for her opportunity to give voice to her suspicions.

The experience in my training years made me comfortable with paranoia. As a result, I have always had one or two paranoid patients on the roster in my private practice here in Providence, R.I. I should stress that no one I see resembles Jared Lee Loughner. I travel a good deal, and I can't leave the covering doctor with potentially violent patients. When my patients have schizophrenia or related conditions, they tend to be the most accomplished, most reliable, and nicest people to suffer these terrible afflictions. Their needs are serious enough.

Not much specific is known about how to treat paranoid patients. Generally, they don't come in hoping to lessen their delusions, which can be wholly convincing to them. They want relief from depression or insomnia -- or from an employer who has insisted they get help. Their mood symptoms may respond to medication, and they may even become less isolative, but generally the system of thought does not budge. After months of trials of different drugs, the patient will be less agitated and less pained but still solidly convinced that he is being watched and threatened. Always, too, there are prices to be paid in terms of medication side effects.

Paranoia the disease and paranoia the symptom are something like orphan conditions, understudied and therefore subject to untested remedies. You can go to a large general psychiatric meeting and not find a single lecture on the topics. Current research techniques have opened windows onto autism and schizophrenia; those good beginnings have led to funding for further studies. Paranoia simply has not been the subject of "scientific opportunity." The condition is probably highly heterogeneous, in terms of what can cause it, and no one has found a way in.

My paranoid patients throw me back on skills I learned early in my training, when the efficacy of psychotherapy was never in question and the use of medication was a sign of desperation on the part of the doctor. We sit and talk. I try not to make matters worse. (One of my mentors stressed that in the face of paranoia, empathy consists in not offering strikingly accurate insights.) Once we have established what therapists call a working alliance, I will try to induce the tiniest wakening of doubt about conspiracies. I consider this effort crucially important, but it is fraught with difficulty. I lose patients over it; seeing that I don't accept their premises, they flee. Others stay and become heartbreakers. They slide ever further into their delusions. I conduct a rear guard action, trying to slow the march toward ever greater certainty about the dark forces.

If I cannot induce doubt, I try to make clear to the patient that others do not believe as he does. Likely he will lose his job if his beliefs emerge even in subtle fashion -- and it is critical for him to keep his job, however humble. If a supportive family is available -- and sometimes it is not, since genetics play their role -- that safe haven can be of enormous help to patients. But my focus is generally on employment. Work is where skills count, where you can be valued despite your quirks. Work is where, if you are lucky, people will come to know and like you over time, even if you are "hard to live with." Work is where you can interact with people without having them intrude.

Beyond the workplace, another source of unobtrusive connection (so I find) is radio. Television serves, too, as does the Web, but to a lesser extent. I have written elsewhere about how a quite troubled patient with no interest in cars found solace in the company of hosts Tom and Ray Magliozzi when she listened to "Car Talk." Over the years, that program has charmed various of my paranoid patients. I see "Click and Clack" as co-therapists; they demonstrate a relaxed way of responding to life's inevitable frustrations. On the whole, public radio has this reasonable tone. I don't love it when patients spend the morning in bed listening to NPR, but there are worse influences. I certainly have had many patients who are mesmerized by the rant media and the politicians they feature and who come in wanting to discuss the outrage of the moment. I find that attachment less reassuring.

Because of what he is accused of doing, Loughner is an unsympathetic, even a horrifying figure. But Loughner's efforts to find work struck a responsive chord in me, as a clinician. According to the Wall Street Journal, Loughner had asked posters to an online forum, "How many applications .... is a lot?" He had listed 21 retail outlets he had approached, including Domino's Pizza and Wendy's. He said he had lost or left jobs at Peter Piper Pizza, Quiznos and others. Although Loughner was disturbed, he did not at that point sound like an utterly alienated man -- rather, one looking for acceptance somewhere. The attempts to study at Pima Community College also suggest some remnant of openness to social integration.

What did Loughner watch or listen to? We do not know. The Web and the media contain ideas as extreme as anyone might want. According to Newsweek, Loughner posted anti-government writings and videos based on the views of the right-wing conspiracy theorist David Wynn Miller. Did more mainstream media influence Loughner? Did fear- and hate-mongering pundits or politicians play a role?

Respected colleagues and columnists have been quick to say no. Shall we give Fox News, Glenn Beck, Sarah Palin and the others a quick pass? It is true that the biology of mental illness has its own imperative. But along with most other people, I do imagine that in a general sense social forces can mute, inflame or redirect impulses. That's what the time in the clinical office is about, in part: the use of interpersonal influence to moderate or channel emotions. Much political speech has the same aim.

The work that I do makes me suspect that creating a hysterical political environment has its costs. Many writers have commented on the corrosive effects of casual references to violence, along with the demonization of public figures and the glorification of gun ownership. I want to add a further consideration, implicit in the others, but worth separating out: tolerance, in the public sphere, for paranoia itself.

Two days before the shooting spree in Tucson, Brian Williams asked House Majority Leader John Boehner whether he would confront the claim that Barack Obama is not a natural-born citizen. In measured tones, Boehner gave a coy response: Hawaii's word is good enough for him, but it is not for him to tell others what to think. Watching the clip when it first aired, I thought, that stance must be risky, using a wink and a nod to leave the door open to patent falsehoods. I meant risky politically, in every sense. After all, the birther claim is a true conspiracy theory, dependent on the premise that government institutions are abetting a complexly plotted fraud.

When they argue their case that the plots they discern are real, paranoid patients arrive armed with examples of views more outlandish than their own. After all, my patients do not deny Darwinism or global warming. If they claim that the president of the United States is a conspirator secretly intent on socialism, it's a sign that they are far down a sad road. The public embrace of implausible beliefs creates a context of credulity. For my purposes, journalists and politicians who countenance conspiracy theories are the opposite of co-therapists; they are enablers. They stand as exemplars of a mode of being that scorns doubt, celebrates grievances, and reframes ordinary disagreements as indicators of sinister intent.

In the context of demonization and demagoguery, this embrace of paranoia helps to compose a politics of constant rage. It is convenient and convincing to say that no particular public figure is directly implicated in Loughner's actions. But I wonder whether finally the imputation of some responsibility is so easy to shed.

Peter D. Kramer is the author of "Listening to Prozac" and, most recently, "Freud: Inventor of the Modern Mind." He practices psychiatry in Providence, Rhode Island, where he is Clinical Professor of Psychiatry at Brown University.