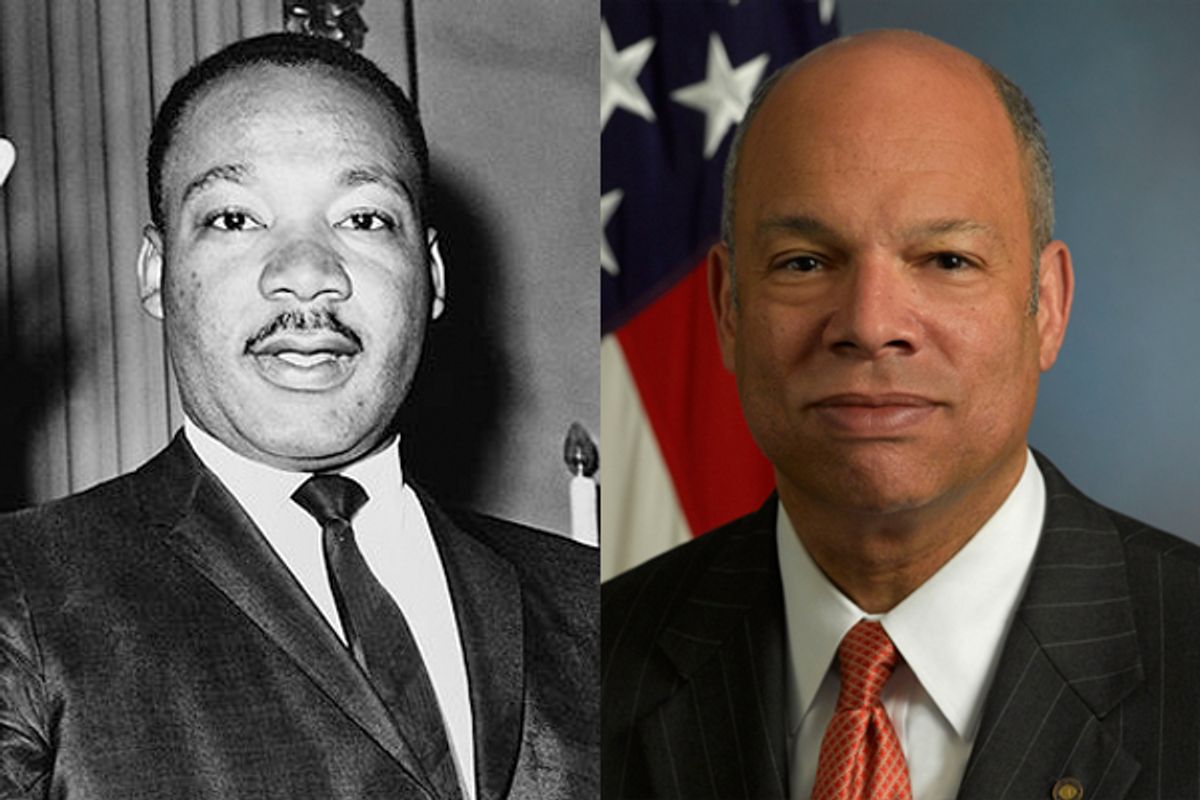 (UPDATED)With Martin Luther King Jr. Day right around the corner, attempts to misuse and/or whitewash his legacy are to be expected, particularly on the right.

But this, from Defense Department general counsel Jeh Johnson, is brazen even in the annals of misappropriations of King:

WASHINGTON, Jan. 13, 2011 – If Dr. Martin Luther King Jr. were alive today, would he understand why the United States is at war?

In the final year of his life, King became an outspoken opponent of the Vietnam War, Johnson told a packed auditorium. However, he added, today’s wars are not out of line with the iconic Nobel Peace Prize winner’s teachings.

“I believe that if Dr. King were alive today, he would recognize that we live in a complicated world, and that our nation's military should not and cannot lay down its arms and leave the American people vulnerable to terrorist attack,” he said.

Johnson goes on to argue that American soldiers play the role of the Biblical Good Samaritan cited by King because they "have made the conscious decision to travel a dangerous road and personally stop and administer aid to those who want peace, freedom and a better place in Iraq, in Afghanistan, and in defense of the American people."

Journalist Jeremy Scahill calls the speech "one of the most despicable attempts at revisionist use of Martin Luther King Jr. I've ever seen."

Obviously it's not possible to know what King, if he were alive, would think of any piece of U.S. foreign policy. But his political philosophy, as outlined in his landmark 1967 speech against the Vietnam War, strongly suggests that he would be an opponent of the wars in Iraq and Afghanistan, and, for that matter, the secret wars in Yemen and Pakistan.

Remember, this is the speech in which King assailed the U.S. government as "the greatest purveyor of violence in the world today." He targeted the "the giant triplets of racism, materialism, and militarism." He opposed the U.S. for  dropping "thousands of bombs on a poor, weak nation more than 8000 miles from its shores." And:

A nation that continues year after year to spend more money on military defense than on programs of social uplift is approaching spiritual death.

All of these arguments are echoed by antiwar advocates today. The whole speech is always worth a listen:

UPDATE 3 p.m. ET, Jan. 14: I wanted to append a transcript of Johnson's remarks to this post, but so far the Defense Department is not making them available. While the DOD press shop has already posted a transcript of remarks made by another official at the same MLK event, Johnson's speech has not been posted. A DOD spokesman told me that it will be posted at some point, but he's not sure when.