No, it's not exactly the fault of Rush, or Newt or Sarah. But they could at least show some introspection 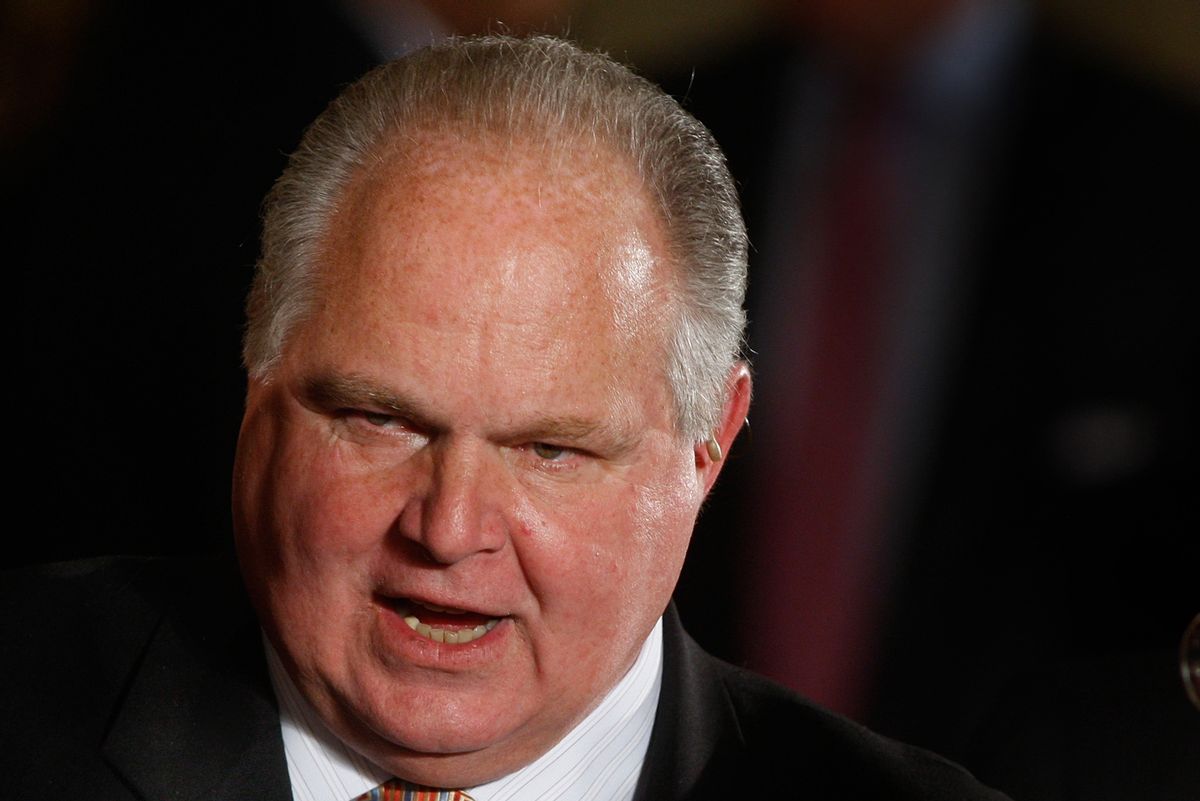 Probably every decent American had the same emotional reaction as former Supreme Court Justice Sandra Day O'Connor to the appalling events in her home state of Arizona. "It sounds like something that might happen in some place like Afghanistan," O'Connor told the New York Times. "It shouldn't happen in Tucson."

Less successful attempts were also made against presidents Gerald Ford and Bill Clinton. Prior to the grievous wounding of Rep. Gabrielle Giffords and the murder of six innocent bystanders, the only member of Congress assassinated in office was Rep. Leo Ryan, in Guyana, in connection with the 1978 Jonestown suicides -- an episode of mass psychosis unique in our lifetimes.

To be a high-profile politician or charismatic celebrity in the United States is to wear a target -- with or without Sarah Palin's help. That's along with events like the Columbine, Virginia Tech and Fort Hood massacres.

Indeed, madmen with guns and obscure, often quasi-political motives have become such a common feature of American life that it takes either a high-profile victim or a high body count to make national TV news -- often the killer's fervent ambition.

Atrocities occur so regularly that most of us know the post-traumatic debate almost by heart. What drove the killer around the bend? Why didn't people who knew him do something? They often say nobody could have predicted, but often somebody did. Why was such a disturbed individual walking around untreated? Don't we have hospitals for people like that?

Finally, how can such a lone demento gain access to semiautomatic weapons? Shouldn't we keep deadly weapons out of the hands of crazy people? Goodness, we license dogs and motorcycles. We regulate fireworks and pain pills. Why not guns? Has America developed a collective death wish?

But never mind the Freudian claptrap. We also already know the answers. In our fragmented society, the archetypal paranoid loner is often cut off from family or community. (This appears not so with Rep. Giffords' assailant, Jared Loughner, although much remains unknown.) Most people who glimpse their psychoses feel no responsibility. It's safest to tiptoe away.

In most jurisdictions, it's far too hard to have people committed to overcrowded, understaffed psychiatric hospitals. The college that expelled Loughner pending a mental-health evaluation appears never to have considered stronger actions. They would likely have been futile. Current law often reflects overblown fears evoked by pop-culture confections like "One Flew Over the Cuckoo's Nest," in which romantic rebels are persecuted for being different.

The vast majority of people with brain diseases are actually less dangerous than the average man in the street. But partly because cases like Loughner's get so much attention, American mental health care remains both less robust and compassionate than it should be.

As for guns, what's left to say? It's come to this: Sen. Frank Lautenberg's, D-N.J., big reform idea is to outlaw 30-round ammo clips. So instead of carrying one Glock 9mm with three clips, the next mad assassin would need to pack three Glocks for whacking congresswomen, judges, senior citizens and little girls.

Alas, the argument over firearms has been lost to hairy-chested right-wingers for whom guns are totems: symbolic projections of manliness, virility and patriotism. What Sarah Palin -- that name again -- calls "Real Americans." Given Arizona's anything-goes climate, Jared Loughner broke no laws until he pulled the trigger.

My own view is that what guns signify as political symbols, as opposed to tools, is a decidedly unmanly fear and lack of self-confidence. I would cite Loughner, a psychotic child playing cowboys in a suburban Safeway, as Exhibit A. But the argument's lost for the foreseeable future.

Which brings us back to Sarah Palin. No, it's not her fault in any legal or moral sense, although if somebody shot Palin herself after, say, Michael Moore put Alaska in the cross hairs, there would be hell to pay.

It's all just high jinks, satire, harmless joking. It's also not Rush Limbaugh's fault, nor Newt Gingrich's for writing that a Democratic president's "secular-socialist machine represents as great a threat to America as Nazi Germany or the Soviet Union once did."

But you know how we're constantly being told how the Democrats are the party of no consequences, no personal responsibility and crippling moral relativism?

It turns out they're not the only ones.