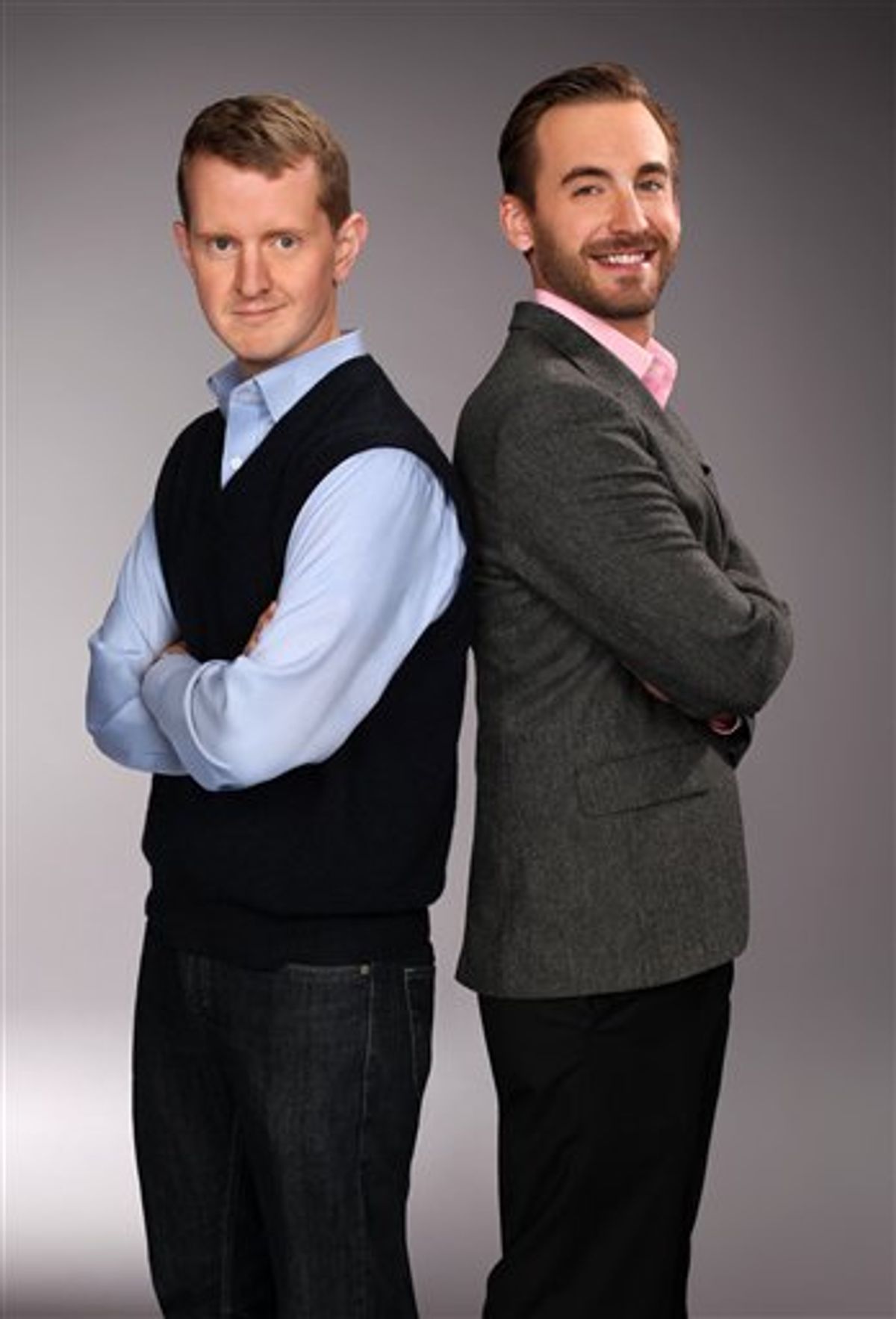 In this undated publicity image released by Jeopardy!, Ken Jennings, left, and Brad Rutter, two of the most successful contestants on the game show "Jeopardy!," are shown. Jennings and Rutter two of the venerable game show's most successful champions, will play two games against "Watson," a computer program developed by IBM's artificial intelligence team. The matches will be spread over three days that will air Feb. 14-16, the game show said on Tuesday, Dec. 14, 2010. (AP Photo/Jeopardy!, Charles William Bush) (AP)
--

It's the size of 10 refrigerators, and it swallows encyclopedias whole, but an IBM computer was lacking one thing it needed to battle the greatest champions from the "Jeopardy!" quiz show.

It couldn't hit a buzzer.

But that's been fixed, and on Thursday the hardware and software system named Watson was to play a practice round against Ken Jennings, who won a record 74 consecutive "Jeopardy!" games in 2004-05, and Brad Rutter, who won a record of nearly $3.3 million in prize money.

"'Jeopardy!' felt that in order for the game to be as fair as possible, just as a human has to physically hit a buzzer, the system also would have to do that," IBM spokeswoman Jennifer McTighe said. "Now Watson has its own real buzzer."

The practice round was to be played on a stage at an IBM research center in Yorktown Heights, 38 miles north of Manhattan and across the country from the game show's home in Culver City, Calif. A real contest among the three, to be televised Feb. 14-16, also will be played at IBM, but the date hasn't been made public.

The winner of the televised match will be awarded $1 million. Second place gets $300,000, third place $200,000. IBM, which has headquarters in Armonk, said it would give its winnings to charity while Jennings and Rutter would give away half theirs.

The practice round is the first public demonstration of the computer system, IBM said. But Watson, which is named for IBM founder Thomas J. Watson, has been engaging in secretive practice rounds with other past "Jeopardy!" contestants, McTighe said. The company won't say how Watson did in those sparring matches.

The system, which is powered by 10 racks of IBM servers running the Linux operating system and has 15 terabytes of random-access memory, or RAM, has been in the works for four years. It has digested encyclopedias, dictionaries, books, news, movie scripts and more, IBM says. It has access to the equivalent of 200 million pages of content. It is not connected to the Internet, so it does not do Web searches.

The company says Watson rivals a human's ability to answer questions posed in natural language -- rather than computer code -- with speed, accuracy and confidence. Unlike earlier computers, it can deal with "Jeopardy's!" subtleties of language, including puns and riddles.

IBM scientist David Ferrucci, a leader of the Watson team, said last month that using "Jeopardy!" to develop the computer system "is going to drive the technology in the right directions."

"It asks all kinds of things," he said. "It has the confidence aspect -- don't answer if you don't think you're right. You also have to do it really quickly."

Watson is reminiscent of IBM's famous Deep Blue computer, which defeated chess champion Garry Kasparov in 1997. But while chess is well-defined and mathematical, "Jeopardy!" presents a more open-ended challenge.

Winning at "Jeopardy!" is not the main prize, IBM says. The technology could mean speedier diagnosing of medical conditions and researching of legal case law, for example.

"This could be something important," said "Jeopardy!" executive producer Harry Friedman, "and we want to be a part of it."

Each contestant will have a podium, just as on normal "Jeopardy!" shows hosted by Alex Trebek. But given the size of the servers, Watson will be represented by an IBM Smart Planet icon on an LCD screen that fluctuates to reflect its processes.

And just as humans have been doing for 47 years on the game show, Watson has learned to come up with an answer in the form of a question.