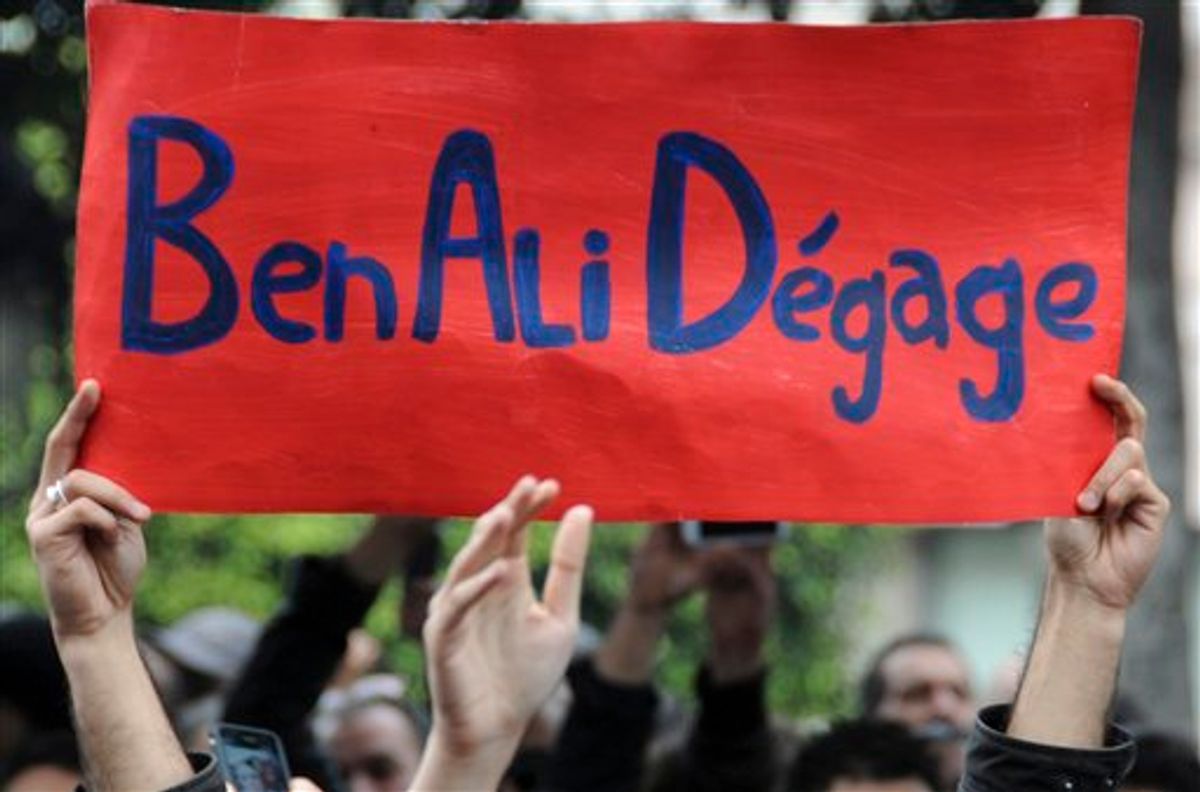 Protestors hold a banner reading "Ben Ali get out", calling for the resignation of Tunisia's President Zine El Abidine Ben Ali, in the capital, Tunis, Friday, Jan. 14,2011. Thousands of angry demonstrators marched through Tunisia's capital Friday, demanding the resignation of the country's autocratic leader a day after he appeared on TV to try to stop deadly riots that have swept the North African nation. (AP Photo) (AP)
--

Thousands of demonstrators from all walks of life mobbed the capital of Tunis on Friday to demand Ben Ali's ouster, the culmination of weeks of protests that have swept the country. Prime Minister Mohammed Ghannouchi went on state television to announce that he is assuming power in this North African nation known for its sandy beaches and ancient ruins.

The shakeup was certain to have repercussions in the Arab world and beyond -- as a sign that massive public outrage could bring down a leader as entrenched and powerful as Ben Ali.

The president tried vainly to hold onto power amid Friday's riots, declaring a state of emergency, dissolving the government and promising new legislative elections within six months. A day earlier, he had promised not to run for re-election in 2014 and also slashed prices on key foods such as sugar, bread and milk.

Yet Friday saw the largest demonstrations in generations. Police repeatedly clashed with protesters, some of whom climbed the walls of the dreaded Interior Ministry, site of torture reports for years. Clouds of tear gas and black smoke hung over the city's whitewashed buildings, and tour operators hurriedly evacuated thousands of tourists.

"I take over the responsibilities temporarily of the leadership of the country at this difficult time to help return security," Ghannouchi said in a solemn statement. "I promise that when I take this responsibility, to respect the Constitution and work on reform of economic and social issues with care and to consult with all the sides."

The 74-year-old leader came to power in a bloodless coup in 1987, taking over from a man called formally President-for-Life. Ben Ali seized power from Habib Bourguiba, the founder of modern-day Tunisia who set the Muslim country on a pro-Western course after independence from France in 1956.

Ben Ali removed Bourguiba from office for "incompetence," saying he had become too old, senile and sick to rule. Ben Ali promised then that his leadership would "open the horizons to a truly democratic and evolved political life."

But after a brief period of reforms early on, Tunisia's political evolution stopped.

A U.S. diplomatic cable released by WikiLeaks called Tunisia a "police state" and says Ben Ali has lost touch with his people.