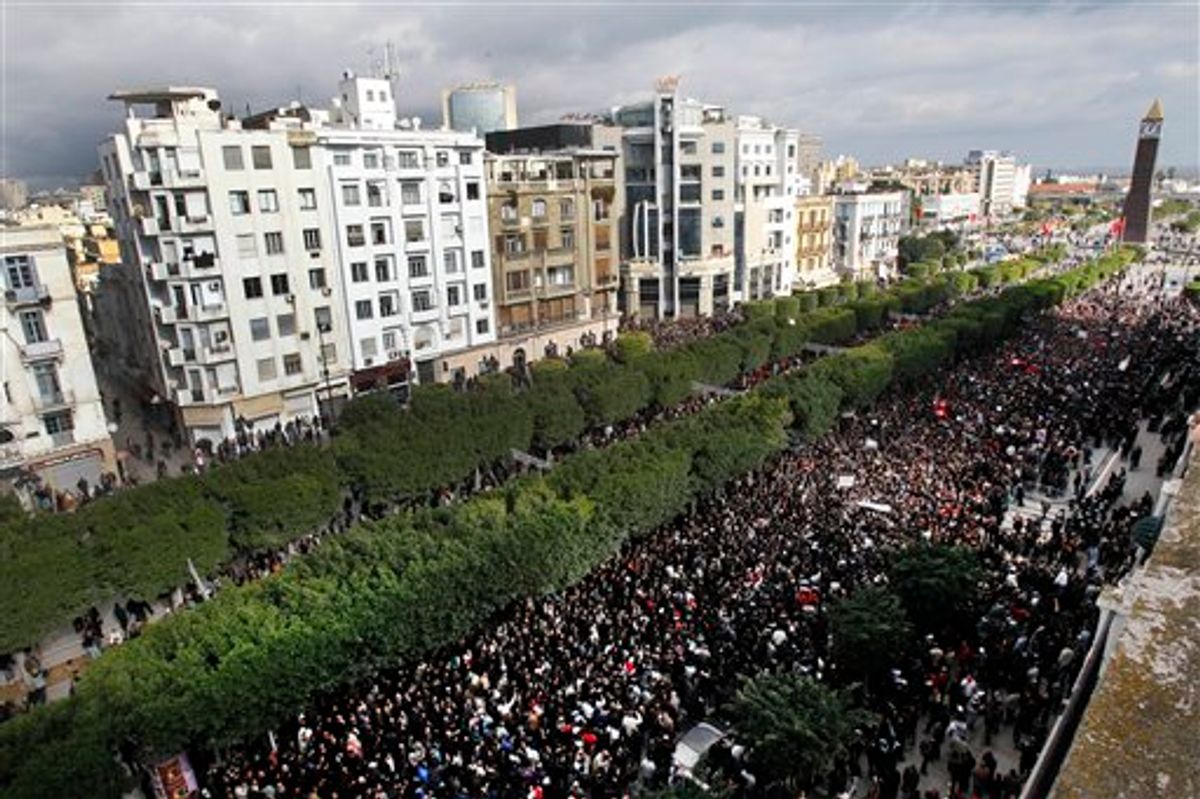 Protesters chant slogans against President Zine El Abidine Ben Ali during a demonstration in Tunis, Friday, Jan. 14, 2011. Thousands of angry demonstrators marched through Tunisia's capital Friday, demanding the resignation of the country's autocratic leader a day after he appeared on TV to try to stop deadly riots that have swept the North African nation. (AP Photo/Christophe Ena) (AP)
--

Today, Tunisia is burning. Tear gas hangs thick in the air and police are in riot gear as citizens have taken to the streets in Tunis, the capital. The president has fled to France. Some speculate that Twitter brought the conflict to its breaking point, but it's more complicated than that.

In the latest episode of a popular uprising against the authoritarian regime, Tunisians took to the streets to protest the regime of President Zine El Abidine Ben Ali. Protesters are calling the leader an "assasain" in reference to recent deaths caused by police bullets from the past few weeks of anti-government action and Ali's slow response in addressing the issues at stake. High unemployment and government corruption top that list of issues.

The trouble started about 3,000 years ago.

Positioned at the northernmost tip of the African continent, Tunisia has always been an exceptional country. Home of the legendary city of Carthage -- home of Hannibal and his especially great war elephants* -- present day Tunisia would become known as the "bread basket" of the Roman empire. Like many a country of rich resources, the area suffered through a long string of abusive foreign empires. After Rome fell, the Vandals occupied the nation until the Byzantine emperor reconquered the region in the sixth century until its dissolution.

Following a series of local Muslim dynasties, the Ottoman Empire took over in the 16th century, only to be taken over by Napoleon in the 19th century. The French Empire, which also controlled neighboring Algeria, left the most indelible mark on the country and contributed to Tunisia's fairly prominent role in World War II.

Tunisia proclaimed its independence in 1957 under the leadership of Habib Bourguiba who helped modernize the country and would remain in power for 30 years. The nation never managed to shake itself free from the shackles of empire. It's struggled through the last 50 years under authoritarian regimes.

President Ben Ali took power in 1987 after doctors declared Bourguiba medically unfit to hold office. The government under French-educated Ben Ali has long been regarded as corrupt and less than humane. Through the 1980s and 1990s, Tunisia frequently topped Amnesty International's list of countries to watch for human rights abuses.

In 2009, the country held national elections. Ben Ali won with 90 percent of the vote -- despite Tunisian citizens living in what Amnesty described as "conditions of repression." Due in part to the global economic slump, Tunisia descended into a state of disarray with soaring unemployment, poor living conditions and continued reports of disingenuous government activity between then and now.

The protests that are making headlines today have actually been going on since December, and they've been serious. On Jan. 4, one man, Mohanmed Bouazizi, set himself on fire in order to protest the government's confiscating his vegetable cart. While the mainstream U.S. media overlooked the story, Tunisia has been trending on Twitter and Facebook for a few weeks.

Today, the dissent came to a head. Ben Ali has dissolved the government and fled to France. Airlines have frozen air space above Tunis and other cities. The country is in chaos. But perhaps, for once, on the road to democracy.

* - My high school Latin teacher actually had a degree in history. Today, I don't know a lick of Latin, but I'm a whiz in Roman trivia!