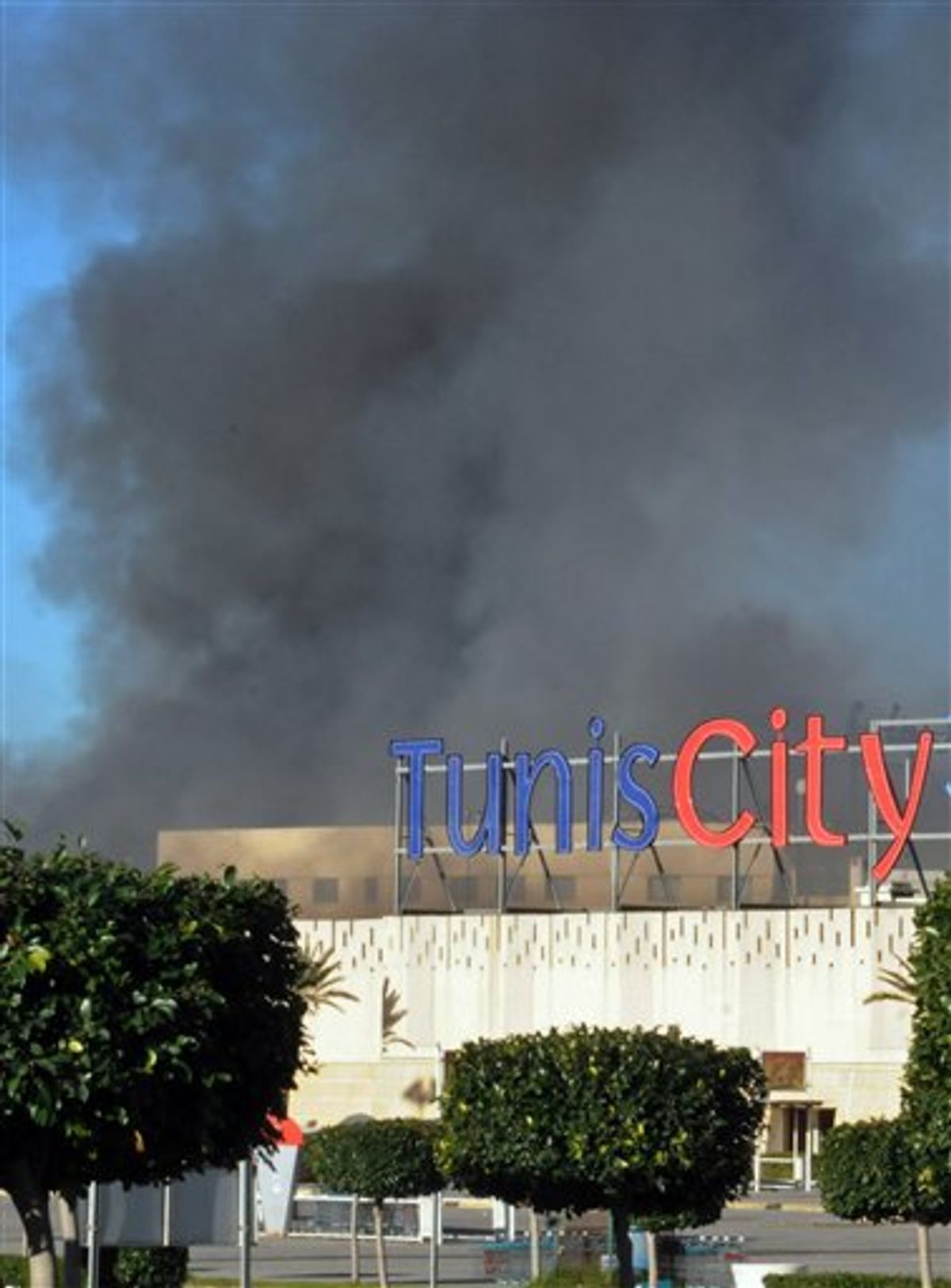 Soldiers and police have exchanged fire with assailants in front of Tunisia's Interior Ministry amid unrest after the longtime president was ousted.

Associated Press reporters saw the shootout Saturday that left two bodies on the ground on a big square in central Tunis. It was not clear whether the two were dead or injured, or who they were.

Snipers could be seen lying down on top of the ministry's roof.

The exchange came soon after Tunisia swore in a new interim president on Saturday. The country has been grappling with looting, deadly fires and widespread unrest after protests forced President Zine El Abidine Ben Ali to flee on Friday.

TUNIS, Tunisia (AP) -- Tunisia swore in a new interim president on Saturday -- the second change of power in this North African nation in less than 24 hours -- and grappled with looting, deadly fires and widespread unrest after protests forced its longtime leader to flee.

At least 42 inmates were killed in two prison fires Saturday, looters emptied shops and torched the main train station and gunfire echoed through the capital.

The interim president -- Fouad Mebazaa, the former president of the lower house of parliament -- ordered the creation of a unity government that could include the opposition, which had been ignored under President Zine El Abidine Ben Ali's 23 years of autocratic rule. Ben Ali fled the country Friday for Saudi Arabia following a popular uprising and deadly riots.

Anger over corruption and a lack of jobs and civil liberties ignited a month of protests, but Ben Ali's departure -- a key demand of demonstrators -- did not quell the unrest. While the protests were mostly peaceful, after Ben Ali's departure rioters burned the main train station in Tunis and looted shops.

Mebazaa, in his first move after being sworn in, seemed intent on reconciliation and calming tensions. In his first televised address, he said he asked the premier to form a "national unity government in the country's best interests" in which all political parties will be consulted "without exception nor exclusion."

The leadership changes came at a dizzying speed. Ben Ali left abruptly Friday night and his longtime ally, Prime Minister Mohammed Ghannouchi stepped in briefly then with a vague assumption of power that left open the possibility that Ben Ali could return. But on Saturday, Constitutional Council President Fethi Abdennadher declared the president's departure was permanent and gave lawmaker Mebazaa 60 days in which to organize new elections. Hours later, Mebazaa was sworn in.

It was unclear who might emerge as the main candidates in a post-Ben Ali Tunisia: The autocratic leader has utterly dominated politics for decades, placing his men in positions of power and sending opponents to jail or into exile.

It was also not clear how far the 77-year-old Mebazaa would go to invite the opposition into the government. He is a political veteran who has been part of the ruling apparatus for years, including leading parliament for two decades.

Ben Ali's downfall sent a potentially frightening message to autocratic leaders across the Arab world, especially because he did not seem especially vulnerable until very recently. For ordinary people, the unrest that followed his departure was frightening.

A fire at a prison in the Mediterranean coastal resort of Monastir killed 42 people, coroner Tarek Mghirbi told The AP on Saturday. The cause of the fire was not immediately clear. Witnesses said another deadly fire also broke out at a prison farther down the coast, in Mahdia, but the exact number of deaths was not yet known.

Sporadic gunfire was heard in the capital of Tunis on Saturday. Black smoke billowed over a giant supermarket as looters torched and emptied it. An Associated Press photographer saw soldiers fire warning shots and try to stop looters from sacking the supermarket in Ariana, north of the capital, to no avail. Shops near the main bazaar were also looted.

A helicopter circled low over the capital, apparently acting as a spotter for fires or pillaging.

"This isn't good at all. I'm very afraid for the kids and myself," said Lilia Ben Romdhan, a mother of three in outer Tunis. "If (he) had stayed in the country it would be better."

Kamel Fdela, selling oranges and bananas in the neighborhood, said he wants democracy but was worried about whether that would come to pass. He also feared potential food shortages with store closed amid the chaos.

"God willing, a real man will take over," he said.

Tunisian airspace reopened Saturday, but some flights were canceled and others left with delays. Thousands of tourists were still being evacuated from the Mediterranean nation known for its sandy beaches, desert landscapes and ancient ruins. Tour operator Thomas Cook's German subsidiary sent home 200 tourists from Tunisia on Friday, but 1,800 were still waiting to be flown out.

President Barack Obama said he applauded the courage and dignity of protesting Tunisians, and urged all parties to keep calm and avoid violence.

Saudi King Abdullah's palace confirmed Saturday that the ousted president and his family had landed in Saudi Arabia, saying the kingdom welcomed him with a wish for "peace and security to return to the people of Tunisia."

It did not give Ben Ali's exact whereabouts, but a source inside the kingdom said he was in the small city of Abha, about 310 miles (500 kilometers) south of Jeddah. The source said Ben Ali had been taken there to avoid sparking any possible demonstrations by Tunisians living in the larger, seaside city of Jeddah. He spoke on condition of anonymity because of the sensitivity of the matter.

Ben Ali managed the economy of his small country of 10 million better than many other Middle Eastern nations grappling with calcified economies and booming young populations. He turned Tunisia into a beach haven for European tourists, helping create an area of stability in volatile North Africa. There was a lack of civil rights and little or no freedom of speech, but a better quality of life for many than in neighboring countries such as Algeria and Libya.

Ben Ali won frequent praise from abroad for presiding over reforms to make the economy more competitive and attract business. Growth last year was at 3.1 percent.

Unemployment, however, was officially 14 percent but actually far higher -- 52 percent -- among the young. Despair among job-seeking young graduates was palpable.

The riots started after an educated but jobless 26-year-old committed suicide in mid-December when police confiscated the fruits and vegetables he was selling without a permit. His desperate act hit a nerve, sparked copycat suicides and focused generalized anger against the regime into a widespread, outright revolt.

Arabs across the region celebrated news of the Tunisian uprising on Twitter, Facebook and blogs. Thousands of tweets congratulating the Tunisian people flooded the Internet, and many people changed their profile pictures to Tunisian flags.

Egyptian activists opposed to President Hosni Mubarak's three-decade regime looked to the events in Tunisia with hope. About 50 gathered outside the Tunisian Embassy in Cairo to celebrate, chanting "Ben Ali, tell Mubarak a plane is waiting for him, too!"

Ben Ali, 74, came to power in a bloodless palace coup in 1987. He took over from a man formally called President-for-Life -- Bourguiba, the founder of modern-day Tunisia who set the Muslim country on a pro-Western course after independence from France in 1956.

Ben Ali consistently won elections with questionable tallies: In 2009, he was re-elected for a fifth five-year term with 89 percent of the vote.

U.S. diplomatic cables recently released by WikiLeaks called Tunisia a "police state" and described the corruption there, saying Ben Ali had lost touch with his people. Social networks like Facebook helped spread the comments to the delight of ordinary Tunisians, who have complained about the same issues for years.

Nicolas Garriga, Oleg Cetinic in Tunis, Hassan Ammar in Doha, Qatar and Angela Doland in Paris contributed to this report.