As the Safeway reopens today, the first responders remember the events of last Saturday's tragedy 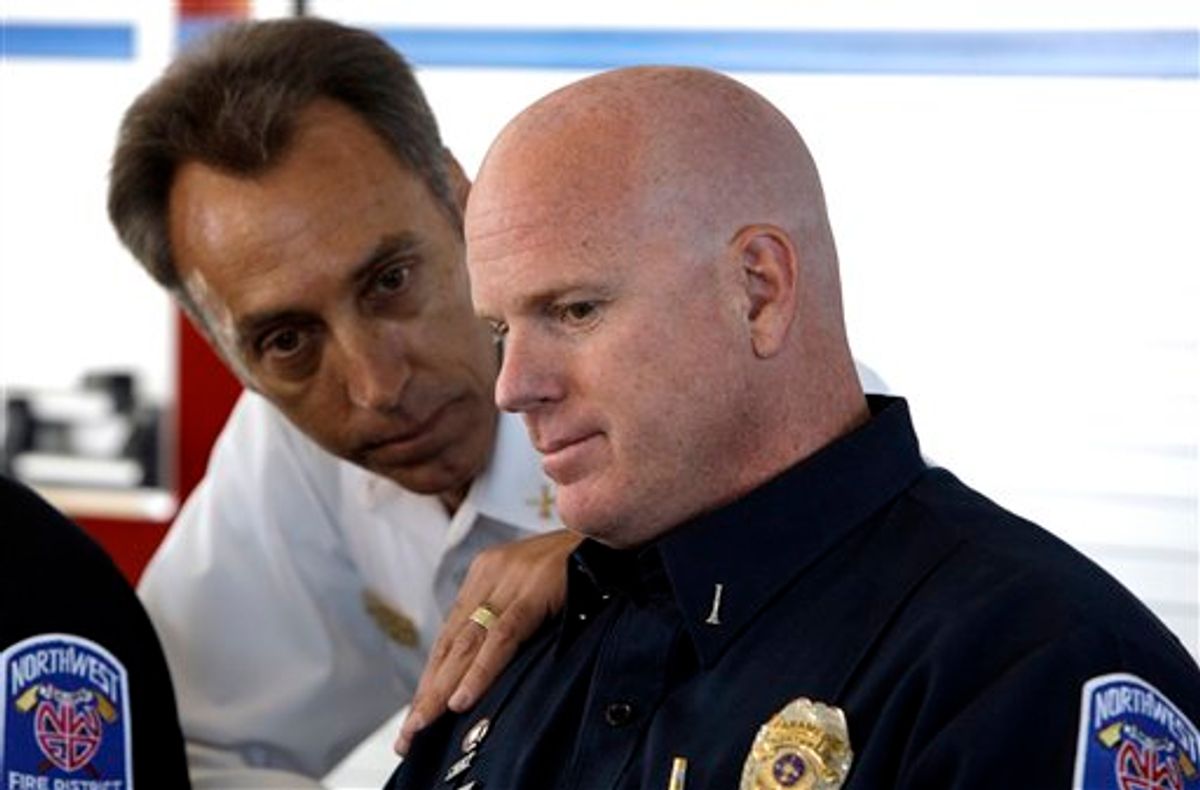 First responders from Northwest Fire District Engine 30 paramedic Tony Compagno, right, who was first on the scene to care for gunshot victim Rep. Gabrielle Giffords, D-Ariz., talks with battalion chief Lane Spalla during a moment of reflection at a Northwest Fire District station Saturday, Jan. 15, 2011, in Tucson, Ariz. Giffords, who is still in critical condition, was one of 19 victims shot last Saturday, six fatally in a mass shooting. (AP Photo/Ross D. Franklin) (AP)
--

Veteran paramedic Tony Compagno stepped off Engine 30 and into hell: Panicked people rushed his crew, trying to pull them toward the injured, while three men desperately gave chest compressions to a 9-year-old girl.

Others cried out "Giffords! Giffords!" and pointed to a woman lying unconscious with a gunshot wound to the head. Several other bodies were already covered with sheets.

Compagno and other paramedics on the first three engine trucks to respond to the mass shooting at Rep. Gabrielle Giffords' Jan. 8 meet-and-greet event recounted Saturday the scene that unfolded a week earlier as they rushed to count and triage the victims.

At the same time, the Safeway where the shooting happened reopened and a memorial of flowers quickly grew outside.

Randy Larson, 57, came by to shop but instead found himself sitting quietly on the curb choking back tears.

"I wanted to come here now and see it now and not two weeks later when it's just a grocery store. I honestly kind of thought, 'Well, I'll come and patronize them and shop' but it's really hard to, because by doing that it's going about your day as usual," said Larson, who runs a sandwich shop in the same shopping center.

"I can't come here and go about my day as usual," he said. "Why should it be usual for me when it's not for the victims?"

Still listed in critical conditions, Giffords was reported as continuing to progress Saturday, with doctors replacing the breathing tube that connected her to a ventilator with a tracheotomy tube in her windpipe. They could soon know if she can speak, but they didn't offer a timeframe. Doctors also installed a feeding tube.

Elsewhere in town, an organization called Crossroads of the West held a gun show, one of many it hosts in several Western states. An estimated crowd of 4,000 showed up on the balmy Saturday, though the mood was less upbeat than past shows, organizer Bob Templeton said. Gun enthusiasts mingled in the county fairgrounds building, discussing Second Amendment rights and buying handguns, rifles and other weapons.

The group considered canceling the event, but decided Tuesday it would go on, said Templeton, adding that the shooting was not about gun rights, but rather "a deranged person who was able to carry out whatever his agenda was."

Tensions were still high, though. One of the shooting victims, James Eric Fuller, was arrested after he threatened a tea party leader during a town hall meeting for an ABC News special, authorities said.

Fuller, 63, who was shot in the knee and the back, objected to something Trent Humphries said. Fuller took a picture of Humphries and yelled "you're dead," authorities said.

Fuller was arrested on disorderly conduct and threat charges, Pima County sheriff's spokesman Jason Ogan said. As he was being escorted out, deputies decided he needed a mental health evaluation and he was taken to a hospital.

Also, Pima Community College released a video -- first to a Los Angeles Times public records request and then to The Associated Press -- that shows suspected shooter Jared Loughner, 22, giving an improvised nighttime campus tour and rambling about free speech and the Constitution.

Loughner's voice provides an angry narration that includes statements such as, "I'm gonna be homeless because of this school," and calling Pima "a genocide school." College officials confirmed that the video, discovered on YouTube, led them to suspend Loughner from school Sept. 29.

On Saturday, as Compagno and fellow paramedics focused on their memories of the carnage, images from the rampage were sketched anew.

Compagno said he first came upon a woman lying unconscious on the ground in a pool of blood -- he still doesn't know who she was -- and immediately realized the established system of triaging patients with color-coded tags would take too long.

As his colleague directed all the walking wounded and uninjured to leave, Compagno and his engineer, Kyle Canty, identified Giffords and 9-year-old Christina Taylor Green as the most critical victims still alive.

By the time he'd decided who was the most critical, other paramedics were pouring in and Compagno began shouting instructions. Two doctors and a nurse, and several other bystanders, had done some basic care already, staunching the blood from one victim's wound with a tourniquet made from a belt, administering CPR to the little girl and comforting those who were still conscious.

Compagno said only one person could speak to him, a woman at the end of the line who'd been shot multiple times.

"I asked her where she was shot, she told me and I said, 'You're speaking to me, we'll be with you in a minute' and turned back around," he recalled. "She understood. She was awesome."

Compagno's engine mate, paramedic Colt Jackson, began work on Giffords, checking her breathing and stabilizing her neck as Engine 31 took over from the three men who were doing CPR on Christina.

Even at the scene, Jackson said, replied to his voice by squeezing his hand.

Emergency responders said that within 25 minutes, the seven most critical patients had been taken from the scene by ambulance and helicopter.

All five members of Engine 31 rode to the hospital with Christina because she was so critical and Jackson rode with Giffords, who was the first to leave the scene. Christina was pronounced dead at the hospital.

It wasn't until later that the first responders realized the magnitude of what had happened and the story it would become, or even learned the identities of the people they'd treated, said Canty, the engineer.

"We knew that it was multiple people shot, but it wasn't until later on that we realized it was a congresswoman holding a meet-and-greet," he said. "It was just chaos and blood."

The Pima County Sheriff's Department confirmed Saturday that the FBI taken into evidence a Safeway surveillance video that may show the shooting.

In the days since, the paramedics have been offered counseling and many have accepted, including Compagno and Canty. The hardest part, they said, has been reliving the trauma every day because of the avalanche of media interest.

"You turn on the TV just to even see something that you normally watch and they're talking about it and now you can't watch that," Compagno said. "You have family and friends that love you and want to make sure you're OK and you have to keep repeating the stories over and over and over. That's the hardest part."

Associated Press writer Alicia Chang in Tucson and Bob Christie in Phoenix contributed to this report.