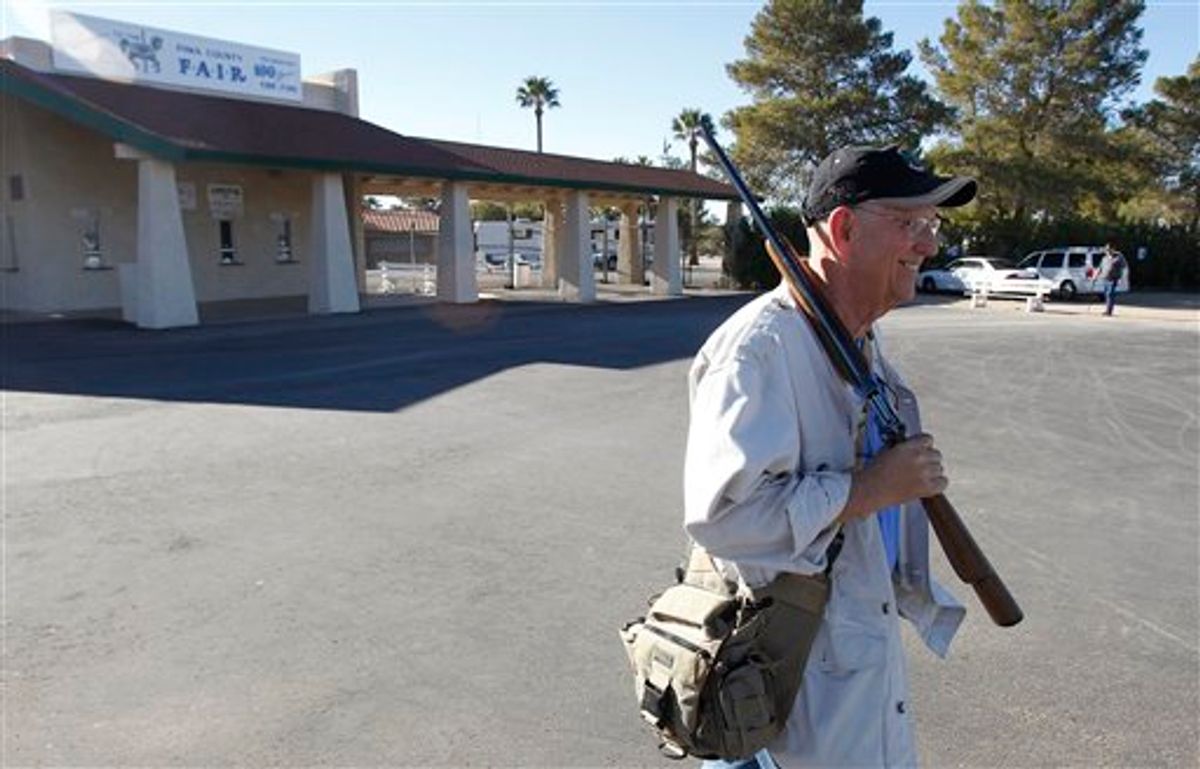 Alex Doster, of Tucson, Ariz., leaves with his purchase at the Crossroads of The West Gun Shows gun show at the Pima County Fairgrounds Saturday, Jan. 15, 2011, in Tucson, Ariz. The gun show went off as planned to about 4,000 attendees on the first day, a week after a violent mass shooting happened in Tucson where 19 victims were shot, including Rep. Gabrielle Giffords, D-Ariz., who is still in critical condition, and the shooting left six of those dead. (AP Photo/Ross D. Franklin) (AP)
--

Less than 10 days after the mass shooting in Tucson that killed six and left a congresswoman in critical condition, the briefly revived gun control conversation -- such as it was -- already appears to be over.

That fact is striking in itself, and it's in line with what I described last week as a moribund gun control movement.

But even more striking is that, in the wake of the mass shooting, Arizona state legislators are preparing to push new laws that would actually make it easier to carry guns. The AP reports today on the agenda of the Republicans who control the state legislature:

They want new laws allowing college and university faculty members to be able to carry concealed weapons on campus, an issue that gained attention after the 2007 shooting at Virginia Tech University

Bills already introduced this year in Arizona in the Republican-controlled Legislature include barring landlords and homeowner groups from restricting the right to bear arms in self defense, and expanding the current law that allows gun owners to display a weapon in self defense.

The co-founder of the Arizona Citizens Defense League told Slate's Dave Weigel last week that he wants a new law to provide firearms training to members of Congress and their staff.

Meanwhile in the state Capitol, lawmakers are openly breaking a state law that bans bringing guns into public establishments. Asked about legislators bringing guns to work in violation of the law, Senate President Russell Pearce (he of SB 1070 fame) told the Arizona Republic: "I will never have a policy that restricts (legislative) members. It's sort of a don't-ask-don't-tell policy now."